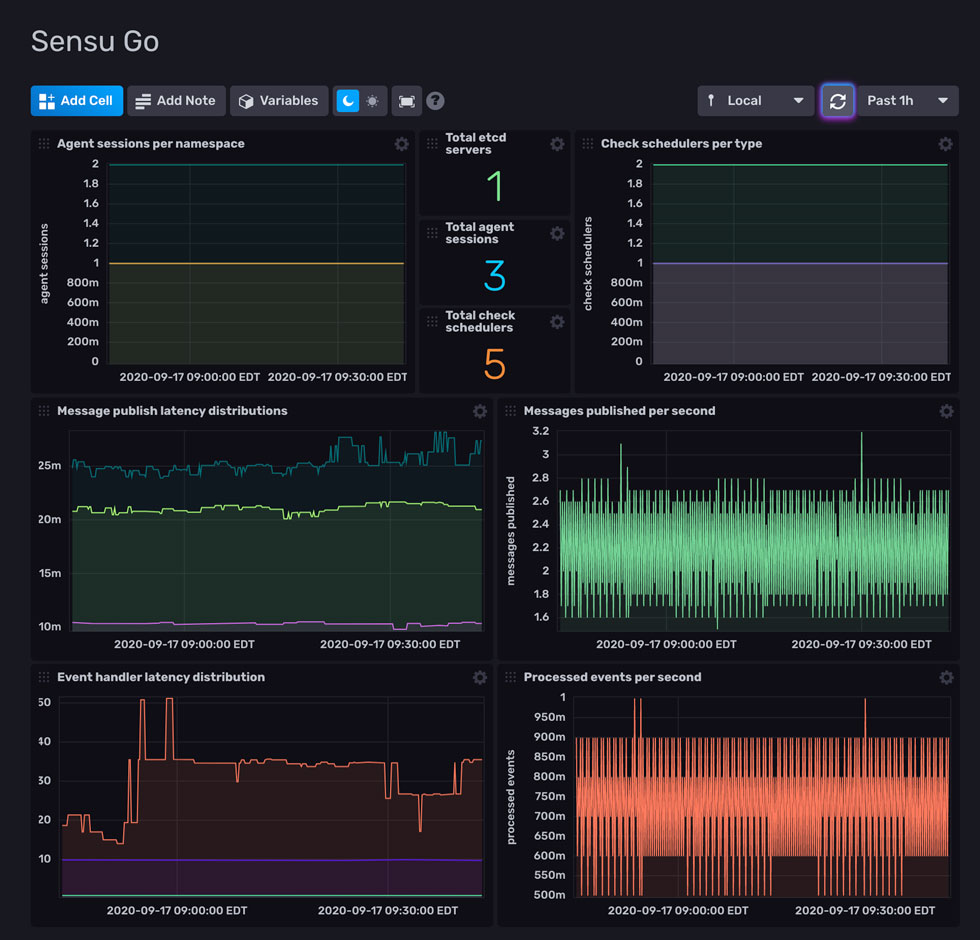 Sensu is an Observability Pipeline that delivers monitoring as code on any cloud. As an omni-directional pipeline, Sensu collects and analyzes monitoring data from a variety of disparate sources, allowing you to eliminate data silos, automate diagnosis, and achieve self-healing.

Once integrated with a data platform like InfluxDB, you may also wish to observe the performance of the Sensu Observability Pipeline using Sensu’s metrics API. The metrics API is not used for metrics that you’re collecting and processing via Sensu, but rather gives access to internal Sensu metrics in Prometheus format, including Sensu’s embedded etcd, memory usage, garbage collection, and gRPC metrics. The InfluxDB Monitoring Template for Sensu Go provides an easy way to collect and observe these metrics.

Within this context, Service Checks allow users to constantly monitor their services, all while giving them the ability to measure resources as well. Generally speaking, Service Checks are executed on any machines that are currently running some type of monitoring agent, otherwise known as a Sensu client. These are commands (or scripts) that output data and produce an exit status code, all of which will give users as much information about the current state of the service as possible.

Also commonly referred to as Event Processing, Stream Processing analyzes and stores streams of information about events that happen in services, allowing users to derive the most accurate conclusions from them. This insight also allows users to potentially execute some type of action in a more informed way, which is a process also called event handling.

Sensu is a unified infrastructure and application monitoring solution that helps you gain deep visibility into servers, containers, services, applications, functions, and connected devices across any public or private cloud. It helps you ensure that your applications are performant and provides your users with the best user experience while managing distributed and complex environments. With such an important purpose, it is equally important to ensure your Sensu Go Observability Pipeline is available and functioning. You can collect all the important metrics to support this cause using the Prometheus Format Telegraf Plugin that comes preconfigured in this InfluxDB Template.

When you consider the volume of information that could be running through a system at any given time, keeping track of it all can be an uphill battle. Therefore, monitoring the Sensu Go Observability tool is important so that you can wade through the produced Service Checks to take appropriate action as quickly as possible. Note that this can involve sending email alerts, creating or resolving incidents that happen, or even storing metric data in a time series database that can then be referred to later on by people who need this information to better do their jobs.

How to use the Sensu Go Monitoring Template

Once your InfluxDB credentials have been properly configured in the CLI, you can install the Sensu Go monitoring template using the Quick Install command. Once installed, the data for the dashboard will be populated by the included Prometheus Format Telegraf configuration, which contains the relevant Sensu Go Input. Note that you might need to customize the input configuration to better serve your needs, including by specifying a new input value. All of this will depend on how your organization is currently running Sensu Go.

To find out more information about environmental variables within the Telegraf configuration, consult the following link.

Some of the most important Sensu Go monitoring metrics that you should proactively monitor include:

Testing and Monitoring and Broken Things

How Sensu implemented a full automated test infrastructure for staging and end-to-end testing.