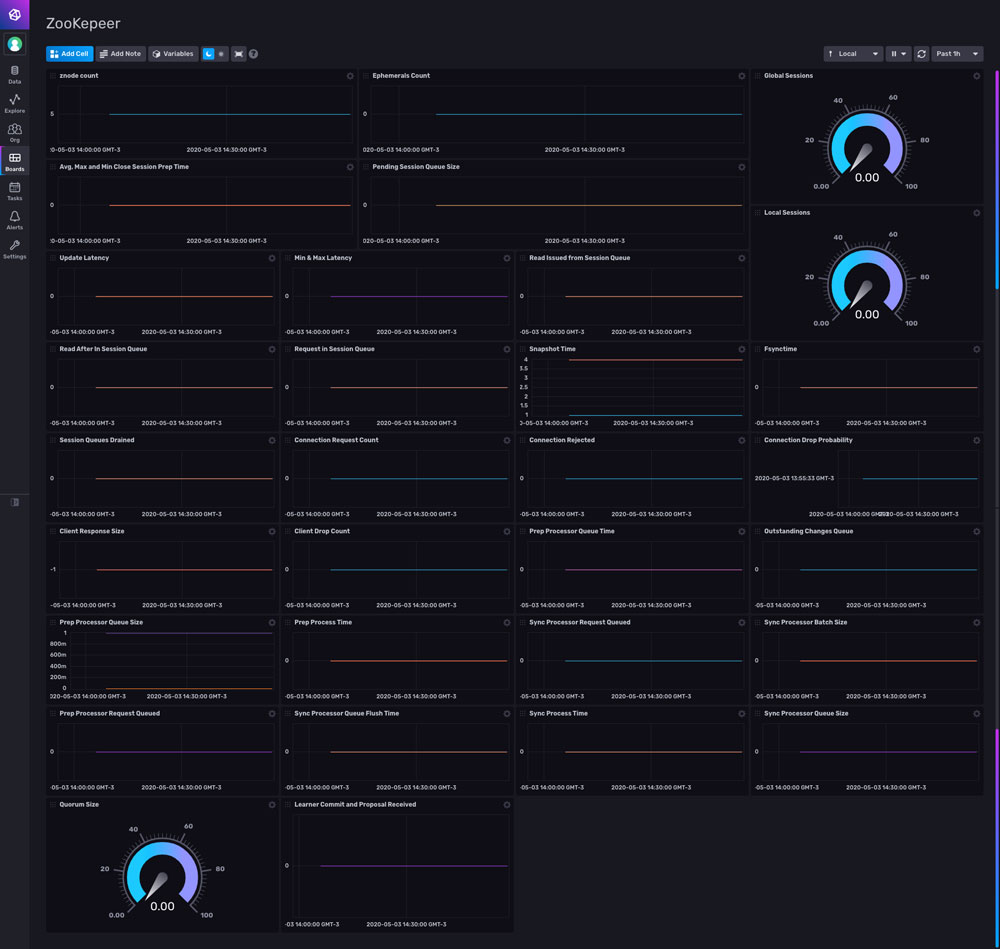 Integrated software suites have a single way they deal with coordination information such as configuration information, naming, distributed synchronization, and group services. Distributed apps do not. Since apps vary widely in how they integrate this information, many developers skip these services entirely, which makes their apps brittle. As soon as the configuration changes, the app breaks, and developers have to abandon their CLI to root out the problem.

This InfluxDB template monitors your Apache Zookeeper instances to ensure they are running properly. As a critical component of your stack, it must be reliable with high availability.

The template offers insight to Zookeeper instances by watching for key performance metrics such as latency, live connections, and outstanding requests. The template gives observers the context to understand how issues have come about, so they can figure out how to prevent them next time.

It has key metrics instantly available, including latency, outstanding requests, network packets, and the number of "follower" servers. For example, you might watch the outstanding requests metric for signs that your servers aren't responding to requests.

Since Zookeeper propagates itself across multiple servers, it will keep functioning provided a majority of the servers are available. That means that it can be difficult to see when something is going wrong because the whole system doesn't grind to a halt. This template gives observers an early warning that some of the services aren't performing the way they should, so they can troubleshoot.

In the template, developers can easily add alerts for key points of failure, for example triggering Slack or email messages to support teams.

How to use the Apache Zookeeper Monitoring Template

Once your InfluxDB credentials have been properly configured in the CLI, you can install the Apache Zookeeper monitoring template using the Quick Install command. Once installed, the data for the dashboard will be populated by the included Telegraf configuration. Note that you might need to customize the input configuration to better serve your needs, including by specifying a new input value. All of this will depend on how your organization is currently running Apache Zookeeper.

To find out more information about environmental variables within the Telegraf configuration, consult the following link.

Some of the most important Apache Zookeeper monitoring metrics that you should proactively monitor include:

Create your own InfluxDB template

Watch the webinar “Create InfluxDB Templates to Make Operations Workflows and Use Cases Scalable and Reliable”.

Learn more about the Zookeeper Telegraf plugin used in this InfluxDB template.