The latest release of Chronograf is packed full of features and functionality focused on improving dashboard usability and performance, while also making improvements to TICKscript development and user administration.

Users of Chronograf are now able to add annotations to their graphs to mark important events, providing context to the data visualized in the graphs. Users can add an annotation to a single point in time, or create an annotation for an interval. The annotations are added to all graphs for that time, which enables users to easily correlate the effects of important events such as changes or outages across multiple metrics. 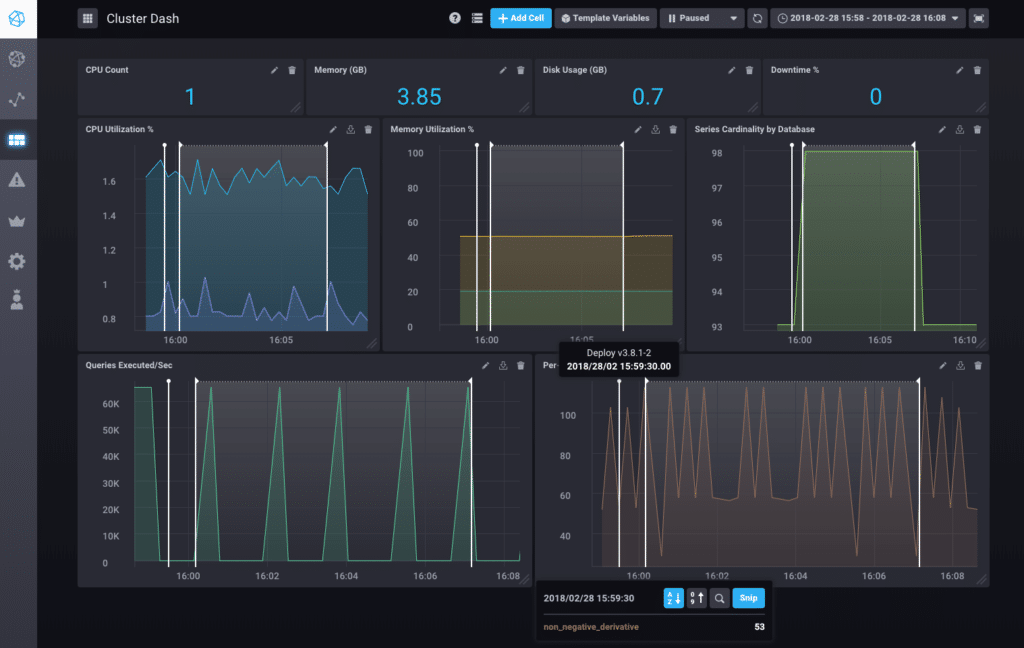 For users creating dashboards with a large number of graphs, we’ve also introduced smarter graph loading to improve UI performance and reduce the strain on the backend database. When a dashboard is loaded, only the graphs currently in view will load and refresh, so a user can quickly see just the information they need. As the user scrolls down the page, the graphs load and refresh automatically as they come into view, keeping the information up-to-date. If you have comments or feedback on this issue, we’d love to hear about it!

Having a graph’s legend visible only on mouse hover isn’t always ideal, such as for dashboards displayed in the office for teammates to see as they pass by. With this release, we have added the option to display a static legend in each cell while also allowing the user to select and highlight specific series in the graph by selecting them from within the static legend. Users can toggle single series visibility by ‘shift’-clicking series names in the static legend 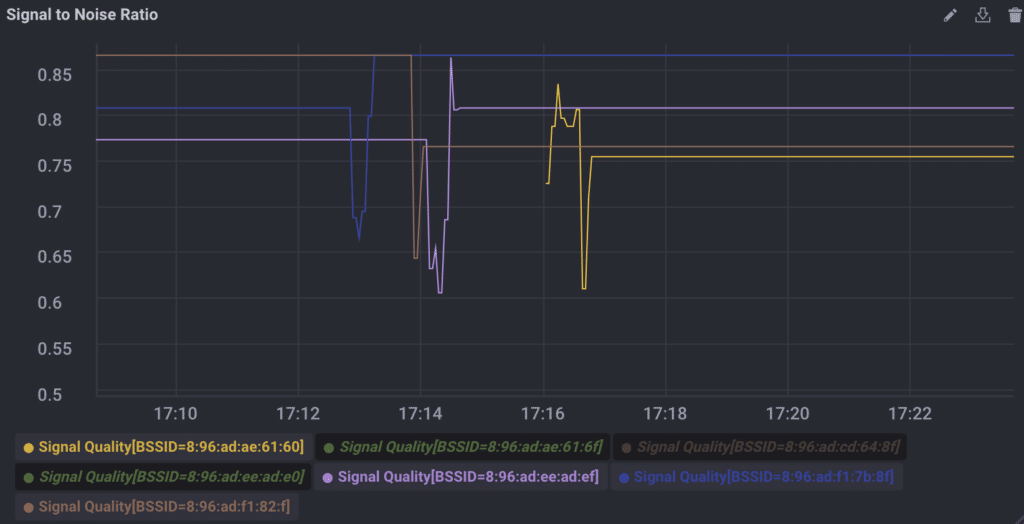 For Kapacitor users and TICKscript developers, there are three significant improvements. First, Chronograf now supports testing alert handler configurations, so you can be sure they’re correctly set up before using them. Second, from within the Alert Rule Builder, Chronograf now supports the ability to add multiple alert nodes per rule, so that users can send alerts to multiple locations. Previously, users with this requirement would have had to manually edit the generated TICKscript to achieve this result. Finally, within the TICKscript editor, we’ve made it even easier to view logs and debug your code right in the browser by enhancing the way the log information is displayed and simplified the process for saving your TICKscript changes. 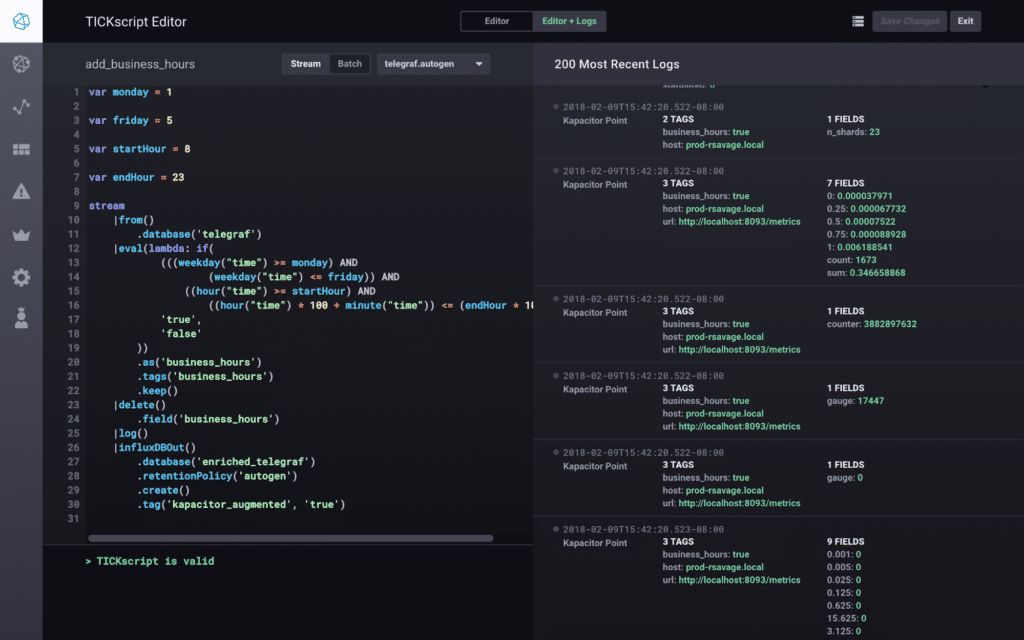 In our 1.4.0 release, Chronograf introduced support for organizations and role-based access control, which allows teams to log in using popular OAuth2 providers and organize their Chronograf instance around the various groupings that make sense for them. Today, we are adding some features and UI improvements to make it easier for admins to manage organizations and users. To start, we’ve introduced organization mappings, which allow admins to automate the task of adding new users to the organization most appropriate for their role. We’ve also added a dedicated “All Users” page, visible only to SuperAdmins, where they can manage all users across all organizations in a single view. Finally, we’ve added the ability for admins to remove themselves from an organization if they need to. 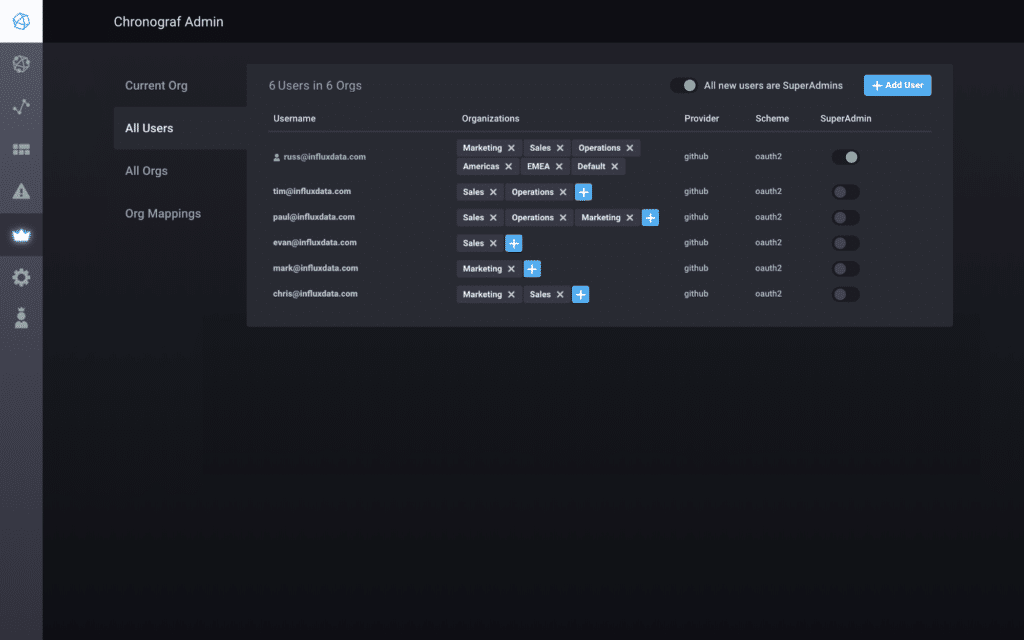 We’ve also updated the codebase to Go 1.9.4 and Node 6.12.3 to take advantage of the improvements there.

We’d also like to extend a huge thank you to Github user @jfyuen for contributing code to this release. Special thanks also goes out to @karel-rehor, @jcmcken, @AlbinOS for helping to find and report issues. Check out the changelog for full details. The binaries for the open source release can be found on our downloads page.

The team is hard at work on the next set of features including a table graph display and a redesigned hosts page. You can track progress and add your thoughts to issues #1686 and #682 respectively.