Herrenknecht AG is a technology leader in mechanized tunneling systems. Engineers at Herrenknecht set out to build an industrial internet of things (IIoT) platform that provided insight into live and historic data for all their tunnel boring machines (TBMs). These machines have thousands of sensors generating high velocity data, sometimes in remote areas with limited connectivity.

Tunnel boring machines are massive industrial machines that have a cutting surface that ranges from 0.10 to almost 20 meters in diameter. As the size of the machines grew, so too did the amount of data Herrenknecht needed to capture about its operation, especially for machines used in traffic tunneling. Having current and accurate information is critical for a TBM operator so they know what to do, how to direct the machine, and how to react to sudden events. 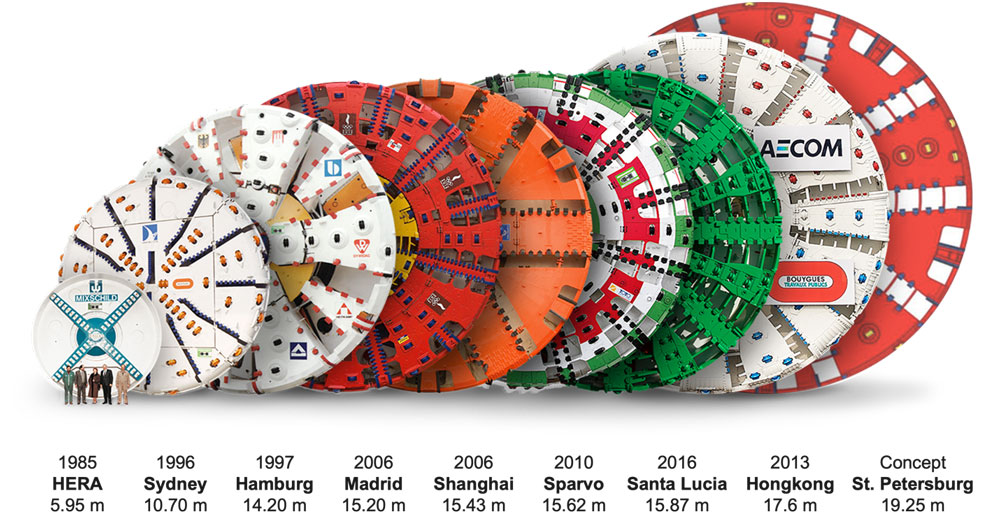 Limited to a small team of developers, Herrenknecht wanted to build an IIoT platform that provided critical data to TBM operators. They needed a solution that was easy to maintain so the team could spend more time on feature development rather than dealing with infrastructure. They also wanted to build the solution using open source technologies to save money.

A number of technical challenges existed for the Herrenknecht developers to overcome. The diversity of sensors was one. Each machine has 5,000 or more sensors, and these collect data at different sample rates. They collect metrics related to cutting surface performance, including data like advance speed, advance progress, cutting wheel torque, maximum allowed penetration per minute, and maximum allowed thrust force. These TBMs operate all over (and under) the world. This presents connectivity issues as these machines can be offline for days, weeks, or months at a time, all of which the team needed to account for. Finally, the team wanted to include both historic data and make the system as future-proof as possible, ideally something that would last 10-15 years.

Data collection on the edge

The Herrenknecht team selected InfluxDB as the central time series storage database for its IIoT platform. They chose InfluxDB because it could handle data collection on edge devices, offered both an open source and an enterprise version (i.e., it could accommodate growth), and it supported Windows, which the TBMs ran at the time. Nowadays, the TBMs primarily run Linux, but they can still run Windows if necessary.

They started by installing the open source version of InfluxDB directly on the TBMs. They use InfluxQL for data processing and custom software to derive aggregations from their granular data. Their services run on top of those aggregations.

Next, the Herrenknecht team built a cloud ecosystem using InfluxDB OSS. They ran InfluxDB inside Kubernetes, with one instance of InfluxDB for every machine in the field. Microsoft Azure cloud provided the storage backend for this system. The setup of InfluxDB OSS was almost identical to that on the edge devices, so that step required little additional development to get operational. Because the edge instances of InfluxDB do all the data processing, they only need to send the clean data to the cloud instances, which reduces the amount of required storage, another cost-saving aspect of the system. The data in the cloud mirrors the data on the machines exactly so that the visualizations on location and in the cloud are identical.

This system worked well until Herrenknecht reached around 100 instances of InfluxDB. At that point they ran into issues with Azure storage that created reliability issues, delayed queries, and increased response times. The company decided to migrate from running open source in the cloud to InfluxDB Enterprise to improve the system reliability. The development team was able to complete the migration in less than two weeks, moving from the Kubernetes clusters to the InfluxDB Enterprise clusters with no read downtime and less than sixty minutes of write downtime.

Migrating to InfluxDB Enterprise reduced the cost of Herrenknecht’s InfluxDB ecosystem by one-third. Instead of having many Kubernetes nodes for all the InfluxDB containers, they switched to a smaller, more cost-effective cluster of InfluxDB Enterprise. The increased stability and performance also benefited their IIoT platform, as their custom interface pulls data directly from InfluxDB.

For more information about Herrenknecht’s solution, its data model, its edge devices, and its transition from OSS to Enterprise, check out the full case study here.