Getting Started with the InfluxDB API

This article was written by Nicolas Bohorquez. Scroll below for the author’s picture and bio.

Time series databases, like InfluxDB, index data by time. They are very efficient at recording constant streams of data, like server metrics, application monitoring data, sensor reports, and any data containing a timestamp.

Telegraf is the preferred way to collect data for InfluxDB, but in some cases, you may want to use an application program interface (API) to develop your solution; for example, if you need to preprocess data prior to putting it in your time series database or if you don’t find an input plugin for Telegraf compatible with your source system).

InfluxDB includes API clients for the most popular programming languages (Python, Java, Go, Ruby, etc.) and can also be used directly used with the REST API.

In this tutorial, you’ll learn how to authenticate through the API, read a data stream, store it as a time series into InfluxDB, and run queries over the data using InfluxDB’s HTTP API.

Before you begin, you will need to install InfluxDB 2.x on your operating system and an HTTP client, like curl, httpie, or Postman. This tutorial will show how to use a local InfluxDB instance on your machine, but you can also use InfluxDB Cloud to get started faster and without having to install anything on your machine.

A time series database is a new class of specialized data stores that require the data models to include a time-based dimension.

A few examples of this type of data are the temperature in a specific geographical point at a certain time of day, the number of people crossing a street at rush hour, or the number of sign-ups in an application per week.

Cumulative data, with small data points and more time granularity, is the preferred type of data to be stored in a time series database. The following are some examples of time series data:

InfluxDB is one of the best tools that you can use for this type of data because it allows you to capture, store, and query the data in a consistent and scalable way.

The InfluxDB API (currently at version 2.x) is a set of HTTP endpoints that provides programmatic access to all the functionality of the InfluxDB system. The API is organized by resources and actions over these resources.

In this tutorial, you will use the Data I/O endpoints to write and query the API, but before you begin, you need to understand the different authentication methods you can use to invoke the InfluxDB API endpoints.

There are three types of authentication methods to be used with InfluxDB:

For the first two options, you are required to generate a username and password; but for this tutorial, you’ll be using the token-based authentication, which you can generate from the InfluxDB UI or with the /api/v2/authorizations API endpoint.

The token-based approach is preferred because the Basic and QueryString authentication methods do not support the token scheme.

Once you have a running InfluxDB installation, you’ll be prompted to create an organization, user, and bucket. 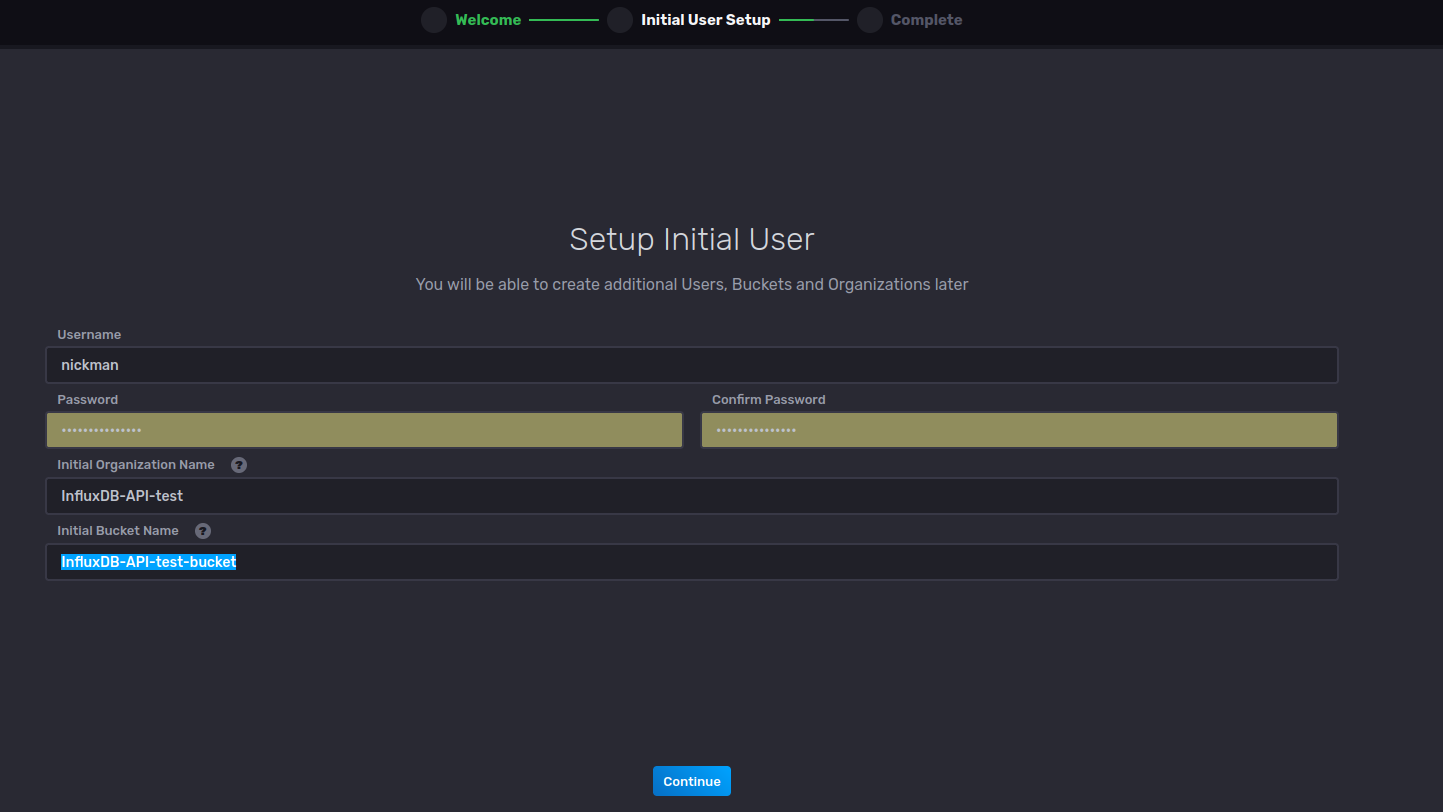 After creating your organization, user, and bucket, check the automatically created API token at the Load Data > API Tokens tab in the web user interface.

In this interface, you can also create new tokens by selecting the Generate API Token button. There, you can name the token and assign permissions.

For this example, the token used has full access, but you should apply the principle of least privilege in production environments.

To test the status of your access to the InfluxDB instance, use the _/ping_ endpoint. For example, use the _curl_ client over the terminal below:

You will obtain a JSON response payload that includes the status and version of the local server:

Like any other resource open to external access, you need to try and minimize the potential security risks that arise when you expose data, even in a controlled environment.

You can follow influxdata’s security and authorization instructions to enable TLS/SSL encryption which allows clients to verify the authenticity of the InfluxDB server.

To insert data using the API, you will need the destination organization and bucket. For this tutorial we will use this dataset containing global CO2 data. Make sure you download the file and store it in the same folder you are using for this tutorial. The scripts below will expect the CSV file to be located in the same directory.

Let’s use the API to check all available buckets invoking the _/api/v2/buckets_ endpoint:

The JSON response contains at least three buckets. The setup screen shown previously, _InfluxDB-API-test-bucket_, is the one that was initially configured and the destination for our test.

Save the orgID value to use as an argument in the following requests.

Now, use an open data set to write data into the bucket: the global CO2 emissions from fossil fuels since 1751. This bucket contains 266 years of carbon emissions compiled by the Carbon Dioxide Information Analysis Center. With a simple bash script, you can read the file, print each year’s most interesting values, and write the data into the InfluxDB bucket.

The script above does the following:

You can call this script using the terminal, passing three space-separated arguments: the organization ID (the orgID saved earlier), the bucket’s name, and the API token used earlier.

Note that the preceding script looks for the global_emissions.csv file in the same folder as the script.

Once you get the source file and the script together, you can run it with this:

The output should look like the following code, which is an HTTP 204 response code per each API invocation.

Pay attention to the invocation of the InfluxDB /api/v2/write endpoint. As documented, it requires the precision, organization, and bucket query parameters, and expects a payload that follows the InfluxDB line protocol.

This protocol is a text-based data representation that contains four components:

Using this format, you can express complex time series data. In this example, only the total co2 and per capita co2 measurements were written into the bucket.

Similar to the write operation, there is a query endpoint that accepts a query in the Flux language (which is a concise and functional language designed for querying, analyzing, and acting on data) as payload. You will also use the orgID value previously saved as a query parameter in order to call the endpoint.

The /api/v2/query can compress the results using an additional header in the request.

You could also include a set of key/value pairs that represents parameters to be injected into the query or even get the results as a specific CSV dialect. This makes extracting data a simple task, in which your creativity and knowledge of the Flux language are the driving forces.

If you have an InfluxDB v1.x database you can also query your data using the InfluxDB v2.x API. First, be sure to verify that the database and retention policy are mapped to a bucket using the /api/v2/dbrps endpoints to list and create the necessary mappings, and then launch the query using the API:

Given that this tutorial uses an InfluxDB v2.x database, you cannot test this InfluxQL sample directly with the current setup. But it’s useful for compatibility testing with previous versions.

A common mistake you may encounter with a time series database like InfluxDB is trying to design your solution following the relational paradigm. InfluxDB’s documentation provides best practices for schema design in time series use cases that you should review before starting to model.

In this tutorial, you learned what the usage basics are for InfluxDB HTTP API, how you can authenticate and test the availability of the API in an InfluxDB instance, and how to use the write endpoint to send data using the line protocol.

You also learned how to read data by querying using the Flux language. The script and data used are available as a GitHub Gist.

Remember that you can also use the API clients available for many popular languages.

Nicolas Bohorquez is a data architect at Merqueo, has been part of development teams in a handful of startups, and has founded three companies in the Americas. He is passionate about the modeling of complexity and the use of data science to improve the world.