InfluxData On The Road: CloudFoundry Summit 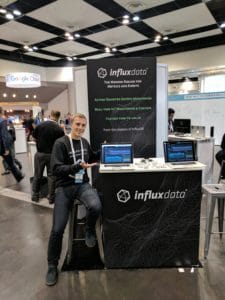 InfluxData was at CloudFoundry summit last week! We met a bunch of users who were very excited to see the new version of Chronograf.

While InfluxDB can ingest metrics from a variety of sources, each one requires something different. In CloudFoundry metrics (application, host, container, etc…) are aggregated in a system called the Loggregator. This is extremely useful, but requires a special piece of infrastructure called a “Nozzle” to read off of the “Firehose”, the stream of metrics coming out of Loggregator.

Prior to the conference I found an existing implementation of a Firehose Nozzle that outputs to InfluxDB. I updated it to work with the latest CF as well as the latest InfluxDB. We also did a webinar on deploying that Firehose that I would encourage you to check out. Also if you have any feedback please let us know! If it is an issue with the code, please open an issue on the repo. Or, if I’m approaching this all wrong, you can let me know over on community.influxdata.com.

While at the show we met a number of InfluxData users who deploy on CloudFoundry. ExpressScripts and the ECSTeam introduced us to some work they had done on an InfluxDB firehose nozzle (complete with a Bosh Release) that they run in production. They also have a tile to deploy an InfluxDB instance in your cluster!