Machine learning – the practice of writing algorithms that improve automatically through experience – has become a buzzword nowadays that connotes to something otherworldly and on the bleeding edge of technology. I’m here to tell you while that may be true, getting started with machine learning doesn’t have to be hard!

InfluxData annually hosts a Hackathon for interns. An intern myself, my team of 3 decided to take a stab at implementing a Slack-incident classifier to improve the daily workflow for the Compute Team. Although Scikit (a machine learning library for Python) can be used to easily classify Slack incidents, we decided to write a classifier from scratch in Flux (InfluxData’s data scripting and query language). At times it was fun and frustrating, but overall it was exhilarating. We chose Flux for its unique data-intensive capabilities that let us succinctly operate on time series data.

What is a Naive Bayes Classifier?

We embarked on a daunting task by learning and writing code in Flux, a functional programming language, in a span of 2 days.

A couple of things about Flux

The Flux map function iterates through every record applying a specified operation.

With that in mind, let’s get to the meat of this thing!

What our demo does

What we’ve got for you on GitHub is a Naive Bayes classifier implementation that currently predicts the following:

Our dataset utilizes binary information about zoo animals. For instance, we have a buffalo with numerous fields like backbone, feathers, eggs, etc. Each of these fields is assigned a binary true or false based on their presence in the animal (0 or 1).

Our implementation currently makes predictions based on a single input field, aquatic. Our classifier predicts whether an animal is airborne or not. We used a Python script to write data into an InfluxDB bucket. In doing so, 'airborne' is set up as a tag in the Pandas DataFrame to initialize it as a Class, and the rest of the attributes are defaulted to an InfluxDB field type.

The following Flux code is the beginning of our Naive Bayes function. It allows you to define a prediction Class, bucket, prediction field, and a measurement. It then filters your dataset to divide it into training and test data.

We can predict the following:

For instance, the probability that an antelope is airborne given it is not aquatic is 69%. 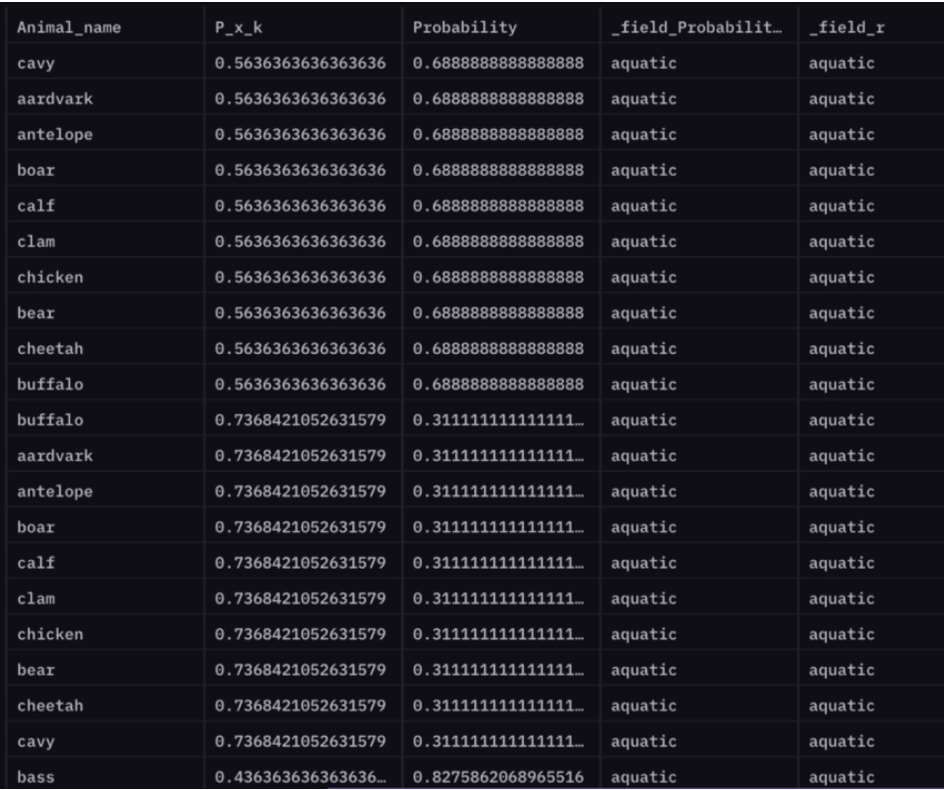 How does all this work?

We’ve essentially divided our dataset based on time? – 3 days for training and 1 day for testing. After some data preparation, we create a probability table that is calculated using only our training data. At this point, our model is trained and ready to be tested. Finally, in predictOverall() we perform an inner join on this table along with our test data to compute an overall Probability table that contains predictions for animal characteristics.

In the future, we plan on supporting multiple prediction fields and leveraging the power of density functions to make more interesting predictions. Moreover, we hope to scale this production to be able to save trained models externally in a SQL table. This project will soon join the InfluxData Flux open-source contribution library, so stay in the loop!

You can run this demo with zero Flux experience! So what are you waiting for? Get started with ML in Flux right here. 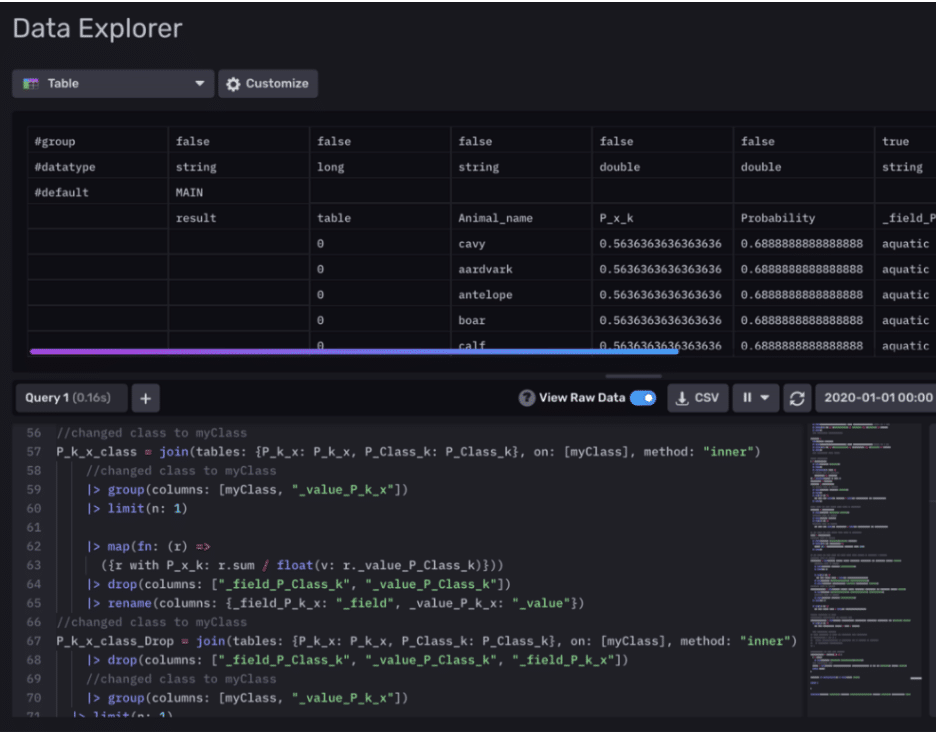 An overview of Naive Bayes Classification in InfluxDB Data Explorer

Huge thanks to Adam Anthony and Anais Dotis-Georgiou for their invaluable guidance and support during this project. And much love to Team Magic: Mansi Gandhi, Rose Parker, and me. Be sure to follow the InfluxData blog for more cool demos!