By developers, for developers – this has always been InfluxData’s approach when building new tools for users, and it’s certainly the case as we roll out the newest round of features and capabilities at this year’s InfluxDays North America. We know that application building isn’t easy and that development cycles are precious. That’s why we focus everything we do around delivering developer happiness.

For example, at InfluxData, we talk a lot about meeting developers where they are. What we mean by this is we understand that not all developers use the same infrastructure, programming languages or development procedures. Some are building applications in the cloud, some on-premises – and many are doing both. So a critical part of our innovation strategy is to facilitate as many options as possible to make the experience of building applications which are fundamentally powered by time series data faster and more efficient for all developers. We’re committed to constantly improving the developer experience – it’s what we work toward every day.

At InfluxData we strive toward two things:

With that in mind, we’re excited about the newest features released today at InfluxDays.

Meet developers where they are

Our first group of updates is focused on creating more ways for builders to easily write Flux queries – taking our commitment to support developers wherever they are another step further. These capabilities let builders pick the development style that works best for them, wherever they choose to build apps. New updates include:

Build, test and operate in the browser with InfluxDB Notebooks
Builders can test out ideas, annotate or explain what they’re doing and why, and even deploy those tasks – all from within the InfluxDB platform without ever having to leave the browser. Developers can now more easily create alerts without having to write code since they can use the new Notebooks Alerting template to send notifications to Slack, PagerDuty and other applications or systems.

Auto-generate code in 10+ languages with Client Libraries
If you’ve used the browser-based tooling to explore your data, create a query, and analyze the results, perhaps you are ready to embed this within your application? Now, you can auto-generate application code that can be rapidly incorporated into your application by simply choosing the target language, allowing teams to quickly develop, validate and test code.

Write Flux code in Visual Studio with the Flux VS Code Extension
For those who may be more comfortable doing all of their development within an IDE, we’ve created a Flux extension for Visual Studio Code (VS Code). The Flux VS Code Extension lets developers write Flux code with all the convenience and efficiency of Visual Studio, including syntax checking, autocompletion, and a schema explorer, which speeds up writing code. Now, the extension also integrates directly with InfluxDB so developers can run Flux tasks natively, but also browse existing tasks from within VS Code. It also allows developers to execute and view their query results, enabling a better experience whether they are composing a simple query or something more sophisticated, which might require a number of iterations to obtain precisely the results they desire. 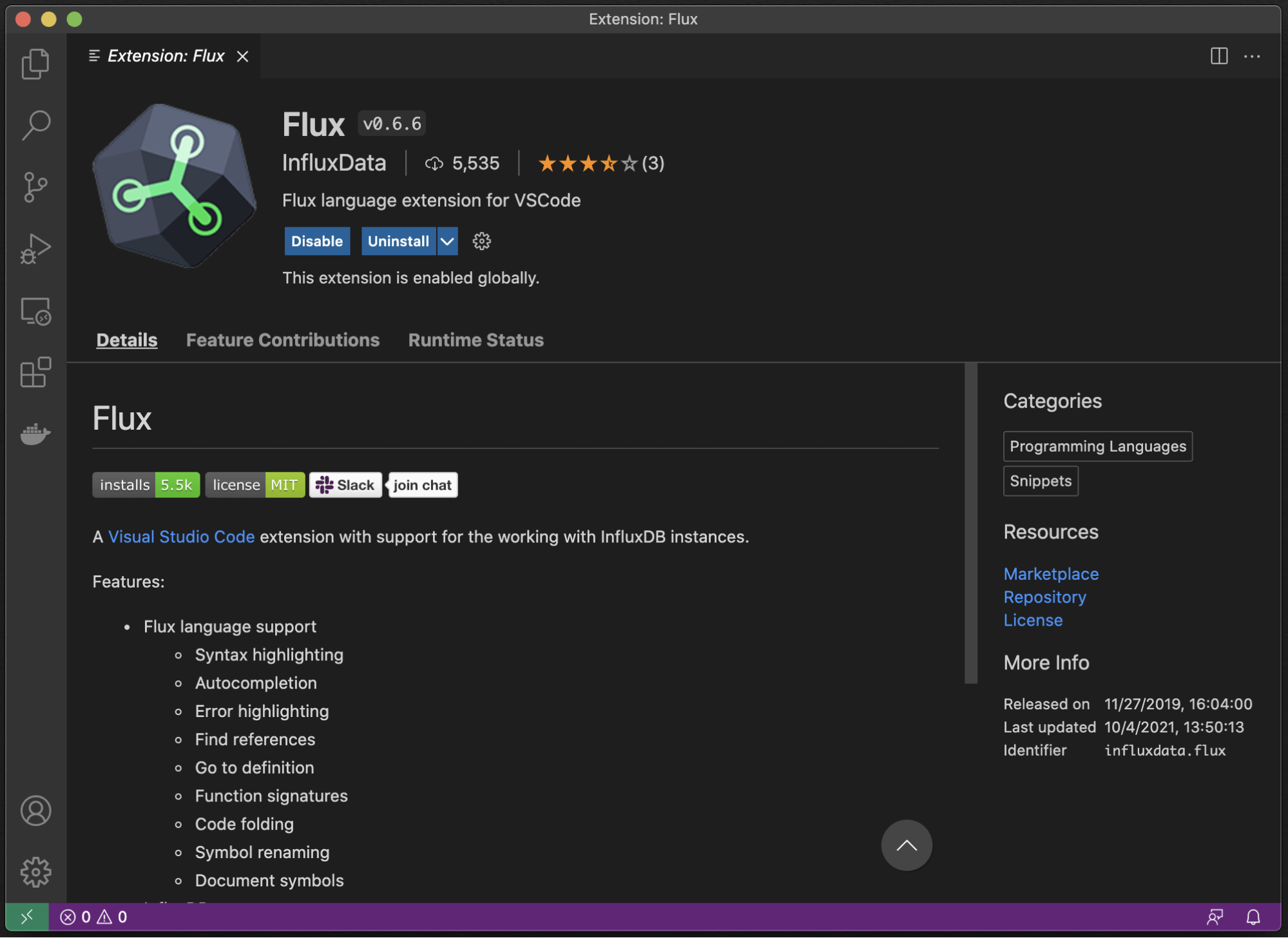 As important as streamlining the development process is, there are new capabilities being delivered within InfluxDB Cloud which are just as critical. In working closely with our community members and customers, these new features address a number of requests for the platform to optimize their Time to Awesome:

Protect against unwanted changes with the Explicit Schema option
The schema-less nature of InfluxDB contributes to how quickly developers can get up and running with it. However, we also recognize that there are times when it makes sense for developers to have more control over the schema. InfluxDB Cloud now allows developers to explicitly define a schema at the bucket level. This can safeguard developers against unwanted changes, ensuring they can continue to run applications with peace of mind.

Integrate Flux with 3rd party platforms
We want users to be able to leverage Flux so that it meets the needs of their environment or system – no matter where it is. That’s why we’ve added notification support for several new platforms, such as Alerta, WebEx Teams, and ServiceNow to an already impressive list of integrations.

Customize Flux for time zone & location.
It’s now possible to write Flux queries which adhere to local time zones, and Flux can even adjust to daylight saving time – allowing developers to fine-tune their analytics based on their precise locations around the world.

More to come at InfluxDays

By understanding the challenges developers face with time series data, the InfluxData team can provide these kinds of features that mitigate development barriers and expedite that coveted Time to Awesome™. As InfluxDays kicks off, we’ll be talking more about how these new features and capabilities extend the flexibility of InfluxDB and Flux, and make the development process a more efficient and productive one.

Make sure you’ve registered for the event so you can follow the livestream and watch all our executive, customer and community speakers. And be sure to tune into our session with InfluxData CTO and Founder Paul Dix at 9:30am PT today where he will be discussing these new features and how they are helping users unlock even more developer happiness.