There are over 260,000 InfluxDB instances in use around the world, covering a number of use cases (DevOps monitoring, IoT and sensor monitoring, real-time analytics, network monitoring, and machine learning) across several industries. Since it is an open source project, InfluxDB is the place to start if you need a time series database.

Unlike other types of databases adapted for time series, InfluxDB was purpose-built for handling timestamped data making it easy to accumulate, analyze and act on the metrics your systems are instrumented for.

Built to address the needs of a modern cloud computing environment, Sensu is popular for monitoring applications, services and infrastructure. The Sensu framework consists of client and server applications that communicate via a message bus.

What differentiates Sensu in its space is its focus around pipelining. You can collect via many different ways, extend beyond that, and then filter, mutate and handle metrics. The Sensu backend has an API. So if you can transform your event format into the Sensu event format, Sensu can ingest it.

Grafana is an open source metric analytics & visualization suite. It is most commonly used for visualizing time series data for infrastructure and application analytics but may be used in other domains including industrial sensors, home automation, weather and process control.

How to use InfluxDB and Sensu for metric extraction

The free and open source version of the Sensu monitoring event pipeline is Sensu Go: it is a revamp of the original Ruby project, with some improvements surrounding metrics. Sensu offers multiple mechanisms to monitor performance metrics.

<figcaption> Among the types of monitoring that Sensu can handle</figcaption>

The metric type (each database name mentioned above) is the identifier that defines which format the check output should be parsed and mapped to the corresponding field output metric format.

For ingesting metrics into InfluxDB, we define a check called check-cpu-influxdb. It’ll be set to run every 10 seconds on any node that you want it subscribed to.

In the screenshot above:

Now that we have a collection of metric points within a Sensu event, we can send it to InfluxDB.

<figcaption> How Sensu integrates with the InfluxDB time series database</figcaption>

The handler configuration on the right of the screen takes the event data and invokes the Go binary Sensu InfluxDB Handler  a Sensu Event Handler that sends metrics to InfluxDB. Here’s how the handler works with Sensu:

The monitoring event pipeline dataflow, as shown above, is as follows:

Any telemetry event that the agent receives will be processed by the backend. This is important because in order to have complete visibility of your app, system, services and infrastructure, you’ll likely have to receive data from multiple sources. As you add different event types (like availability and alerts), you’ll be thankful that the pipeline is dynamic enough to support reusability all under the same hood. 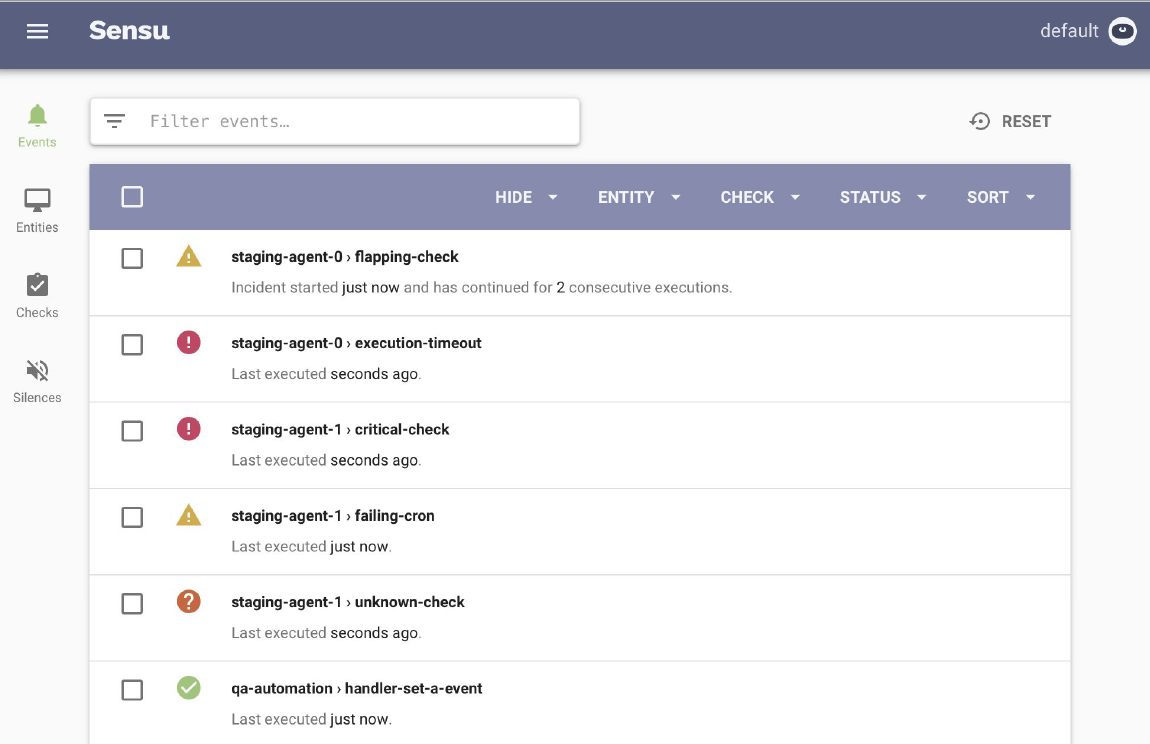 While the Sensu dashboard does provide excellent visibility into the overall health and state of your system, it doesn’t directly visualize time series data. Enter Grafana time series analytics and visualization, which provides a critical and convenient overview of your infrastructure since the “all under one roof” methodology can simplify your workflow and telemetry.

In the above dashboard, there’s a single data source as far as Grafana is concerned because we let Sensu do all of the heavy lifting. The Sensu checks shown here display metrics from both Graphite and InfluxDB, while the StatsD daemon tracks all the API calls and request rates.

As for how development teams can use data stored from metric collection checks in InfluxDB, see our previous blog post Sensu and InfluxDB: Storing Data from Metrics Collection Checks  where we also provide setup tutorial and introduce the integrations provided by the InfluxDB Sensu Plugin.

If you want to know more about monitoring with Sensu and InfluxDB, don’t miss out on the InfluxData hands-on workshop Integrating Sensu and InfluxDB during the upcoming Sensu Summit in Portland, Oregon this September. There, InfluxData’s DevRel Noah Crowley will show how to set up InfluxDB to store data from both service checks and performance metrics, create visualizations and dashboards from that data using the InfluxDB UI, as well as perform complex checks and alerting based on historical data.

Stop by the InfluxData booth at Sensu Summit (September 9-10 in Portland, OR) to learn more.