In “Star Trek: First Contact,” the USS Enterprise-E and her crew are sent through a temporal vortex in an attempt to stop the Borg from preventing the human civilization’s first warp flight, which leads to the first contact with an extraterrestrial culture (the Vulcans) on April 5, 2063.

April 5th is a special holiday for all Trekkies out in the universe. April 5th is the day we celebrate First Contact Day and all things Star Trek.

On April 5th 2063, Zefram Cochrane will be the first human to travel at warp speed and to make first contact with an alien species. Forty-three years from today, in Bozeman Montana, he will blast into space while rocking out to Steppenwolf’s “Magic Carpet Ride”. Cochrane’s vessel, the Phoenix, is the first human-made warp capable ship. If this wasn’t significant enough for the history books, he will make first contact with the Vulcans!

As of 2020, planes are only capable of traveling at the speed of sound. On October 14th 1947, Chuck Yeager broke the sound barrier when he flew the Bell X-1 experimental aircraft. From the time Yeager first flies at the speed of sound, it will be another 116 years until Zefram Cochrane will fly at the speed of light. Lightspeed is about 186,282 miles per second!

Cochrane will build the Phoenix out of an old Titan II nuclear missile. The Vulcan survey ship T’Plana Hath will detect the spacecraft and its warp signature. In the 24th century, the Borg will attempt to alter the timeline by stopping humans from meeting Vulcans. If they don’t meet, that will mean no United Federation of Planets or Star Fleet, right?

The Borg will force Captain Picard and his Enterprise crew back to April 4th 2063, just one day before First Contact with Vulcans. In order to preserve the timeline, Picard realizes they must destroy the Borg sphere to ensure first contact with Vulcans still occurs!

One of the primary goals of Star Fleet will be to seek out new life and new civilizations. Beyond Cochrane meeting Vulcans, all First Contacts are met with excitement and revelry. It is believed that Captain Kathryn Janeway will make First Contact with more species since Captain James T. Kirk. Granted, Kirk won’t have the Prime Directive to adhere to. Not that all captains will always listen to the mandate. The Temporal Prime Directive will allow any Star Fleet crew to step in whenever the Borg start to meddle, like with First Contact with the Vulcans. Captain Benjamin Sisko and his crew will meet many new species as they’re stationed on Deep Space Nine, which is right next to the wormhole to the Gamma Quadrant.

Fun Fact: It is believed that the Vulcan who will greet Zefram Cochrane is Spock's grandfather.

In the spirit of First Contact Day, we celebrated by asking Influxers: What is your favorite species in the Star Trek universe? 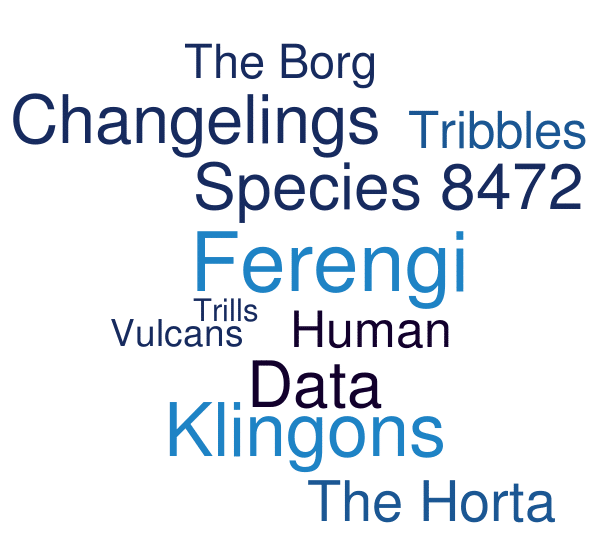 As the newest Star Trek TV show, many of us have watched “Star Trek Picard”. Our very own Michael Kokot has provided this review:

As someone who regards themselves as a die-hard fan of Star Trek: The Next Generation (TNG), I was pleased to hear that a continuation series was in the works. My excitement was tinged with a certain amount of trepidation. Barring the fairly forgettable TNG movies, the original show’s finale was marked by a perfectly executed, bittersweet and all around well-received sendoff. So we, the fans, had our closure; there was no need to revisit the adventures of Captain Jean-Luc Picard. But like many hit shows, it was inevitably destined to receive the “where are they now” treatment. If it had to happen, I thought, then maybe they’ll do this rightmaybe they’ll be able to recapture the spirit of Gene Roddenberry’s bright vision of the future and do justice to the memory of one of my favorite shows.

The series opens with Captain Picard living out his final days on the family’s vineyard in France. Fate comes knocking on his chateau door in the form of the synthetic daughter of the late Commander Data: Dahj. She is on the run from an anti-synthetic, doomsday religious sect of the Romulan secret intelligence agency. The fate of all organic life in the galaxy depends on Picard finding Dahj’s twin sister, Soji. It will bring him closer to piecing together the mystery of why the sect is so set on eliminating all synthetic beings, and why he is haunted by recurring visions of Lieutenant Commander Data.

The good? I thought the show started off with an intriguing premise, and the first few episodes weren’t bad. I enjoyed a rather TNG-esque speech given by Picard on the power of optimism and openness over fear and secrecy. The show is definitely entertaining. I think even if I wasn’t a Trek fan, I would still watch it - one of the reasons I suspect it was made for a much wider audience and not just the classic Trekkies. Star Trek: Picard is at least somewhat self-referential to its source material, but this occurs only in the form of cameos with no real bearing on the plot and the occasional “remember this” kind of callback.

There is a greater emphasis on action; something uncharacteristic of the Star Trek I grew up with. In the past, Captain Picard would use his knack for diplomacy and mediation to end a conflict. The writers now seem to favor a less subtle approach. One of my favorite things about the original series was that each episode waswell, episodic. The new series is marked by continuous narratives and overarching season-long storylines; gone are the days of self-contained, hour-long stories about scientific discovery and thought-provoking philosophical debates.

The writing is one of the weaker points of Picard, with some accusing that the storyline is straight from the video game Mass Effect III. I’ve never played the game, but I’ve heard it was not the best received installment of the series which leads me to question why they would draw direct inspiration from it, if they did. It does not feel as “smart” as its predecessor; the science in TNG was always guided by advisors from NASA and the scientific community. Now it seems those advisors have been replaced with fight choreographers and stuntmen.

To say it feels like assembly line actors wearing Star Trek clothes would be too harsh. Instead I will say this; Picard is a lot more of an accessible show to newcomers and though it may not provide the same kind of escapism to a deeply entrenched classic Star Trek nerd such as I, it is undeniably fun. Let’s call it a good, sci-fi action romp to distract oneself away from current events.

Fun Fact: Jordan's King Abdullah II is a Trekkie and guest-starred in a 1996 episode of "Star Trek: Voyager".