Part 1: How-to Create an IoT Project with the TICK Stack on the Google Cloud Platform

InfluxData is a platform for collecting, storing, visualizing and managing time series data. My particular interest in this platform stems from a lot of work that I had done a few years back in the RFID space. A time series database was the key to creating “Track and Trace” applications.

Since then, with the advent of hardware like Raspberry Pi, Arduino, Tessel and low cost sensors, it is straightforward to start collecting data. In most sensor systems, a time series database is again very useful since typically you will end up collecting a series of sensor data over time. For e.g. capturing the temperature every 5 minutes at a particular location. Replace temperature with your favorite sensor data if you want and you get the picture. While my requirement for time series data might be restricted to IoT and sensors, there are fairly wide ranging applications of a time series database. Check out the use cases that InfluxData has put up.

You always have the option to build out your own solution to capture this data. In addition to capturing data, you will need dashboards, raising alerts based on data values and more. It makes pragmatic sense to look at platforms that have been created to handle all of this and more.

At a high level, what you want from platforms like this, are some high level functional requirements like:

There will definitely be more requirements but the above is a general list that would be expected from any such platform. In addition to the above, there could be cross cutting concerns like security, logs, etc. that would be a requirement too.

InfluxData caught my interest because it had elements (modules / applications) that addressed all the above points. It has the following modules, named TICK and I am reproducing the diagram from their official documentation: 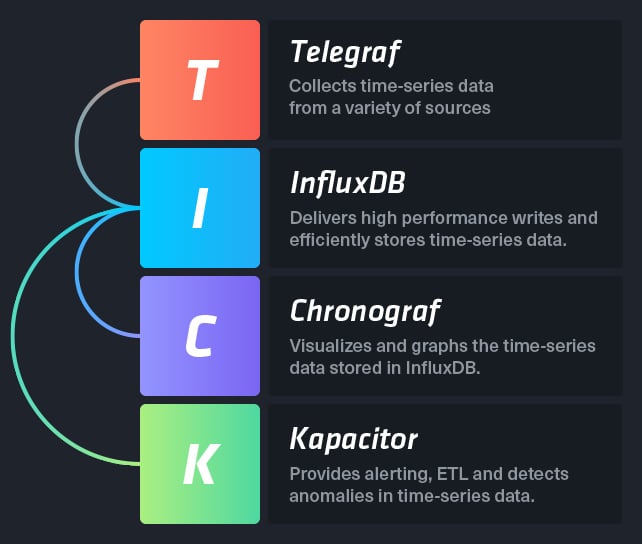 This tutorial series will start off with InfluxDB first and get that up and running on the Google Cloud Platform. Once we get that in place, we will build out an IoT project with Arduino/Python and feed that data into InfluxDB. Then we could possibly look at some visualization and or alerts via other products in the TICK stack.

Part 1 : Get InfluxDB up and running on Google Cloud Platform

The first step is to create a project. Follow these steps: 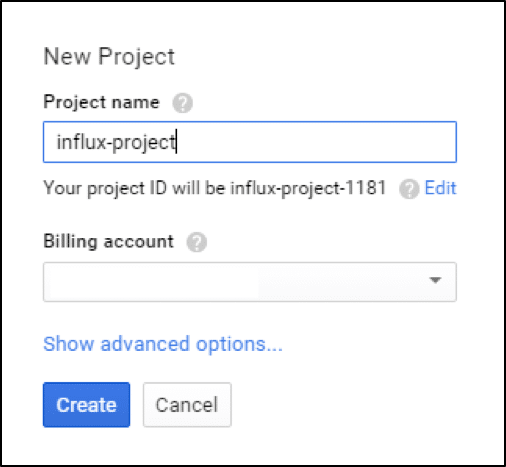 Be patient while the project is being created and initialized.

We need to create an instance on which we can run InfluxDB. This means we need to provision a VM (Linux based) from the Compute Engine service.

To set up InfluxDB on our VM instance, we will need to SSH into the instance. Follow these steps:

The next thing is to install InfluxDB and I reproduce the steps below from the official documentation:

First up, set the package manager:

Then install and start the InfluxDB service:

You can now launch the client shell (influx) to validate that it is able to connect to the influxd daemon. The client shell is similar to various other shells that you might have used in databases like MySQL that let you interact with the database server.

Just type influx at the terminal and you should see an output that looks like this:

You should be at the influx shell prompt (>) and over here you can now start interacting with the InfluxDB daemon. Some of the common operations that you can do via the shell are creating databases, inserting data, querying data and more.

Note that the commands you provide in the shell are executed via API calls to the InfluxDB daemon that is running on the localhost on port 8086.

Create a database and test out some queries

Let us now create our temperature database in InfluxDB that will be used to capture temperature sensor values from multiple weather stations.

Our model is very simple for now. I have several weather stations (Arduino + temperature sensor) installed at various physical locations across the city of Mumbai. Each location is identified by a unique name, for e.g. S1, S2, S3 and so on. And each station captures temperature values every few seconds and that is what we will capture in InfluxDB.

InfluxDB has excellent documentation to get you started. You can refer to the docs for more details on the commands that I will be using in the next few sections. However, the commands are intuitive enough for you to follow along. (I also recommend reading the docs to understand the key concepts in the InfluxDB.)

All the commands are fired from the InfluxDB Shell (>) that we have started earlier.

This will create a database named temperature_db and we can verify that by firing the show databases command as given below:

Like any other database system, there could be multiple databases present and managed by the single InfluxDB Server, so we need to specify which database we want to work with. In our case, we are working with the temperature_db, so we select that via the USE statement.

Now, we are all set to insert the data in a collection (measurement) of our choice. There are various ways of getting the information into the InfluxDB like the shell we are using now, agents and also the API. We shall be taking a lot at the others later on in the series but for now, we will use the current shell that we are logged into.

Since what we are measuring here is the temperature, we can call our measurement as ‘temperature’. In addition to each measurement, we can also specify:

The data to be inserted into InfluxDB uses the line format, the format of which is given below:

For e.g. a measurement (temperature) from our station (S1) with temperature value 29.8 is as follows:

Let us go ahead and insert some sample records. Fire the INSERT statements at the shell as given below:

Notice that we are not providing the timestamp, an important field. This is the Unix Timestamp and if we do not provide it, InfluxDB will populate it for us at the time of writing the record. For now, this is not provided but if you are working in offline mode and wish to capture the local timestamp then you should provide that rather than letting InfluxDB set that value. Note that timestamps can be up to nanosecond range.

We can now query for the records via the the SELECT statement. I am showing some sample SELECT statements but the possibilities for querying in multiple and unique ways is available in InfluxDB.

Try out some queries with WHERE clause. If you have used any SQL like database before, this should be straightforward.

You can come out of the InfluxDB shell via the exit command.

InfluxDB comes with a handy administrative web application that you can use to manage databases, insert records, execute queries and more. We could have used that in the previous section, but I believer it was important to understand the shell too.

Another reason was to demonstrate how still have some work to do on Google Compute Engine so that we expose the right ports via which we can then access the InfluxDB admin web app from anywhere outside.

The first thing to note is a configuration file influxdb.conf. This file is present in /etc/influxdb/influxdb.conf

We are particularly interested in accessing two services from outside:

If you go through the influxdb.conf file, you will find that there are 2 ports that are used by it, namely 8083 (InfluxDB admin web app) and 8086 (API). 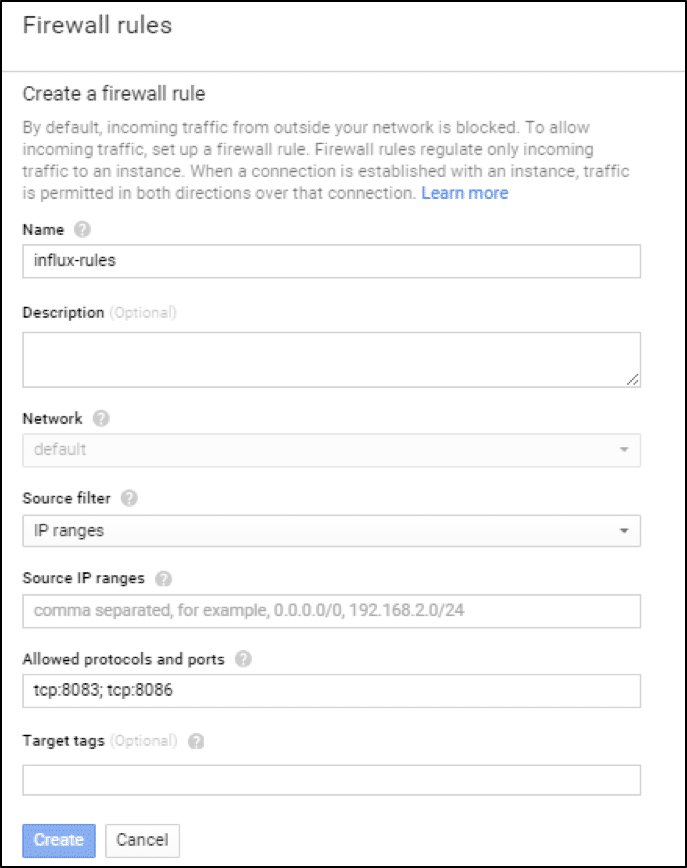 This will enable access from outside traffic on the ports 8083 and 8086.

We can now access the Admin interface from any machine outside the Google Compute Engine network.

To find out the public IP address that is given to your Google Compute Engine instance running InfluxDB, do the following:

Use that address to access the Admin interface at:

You should see an Admin interface as shown below: 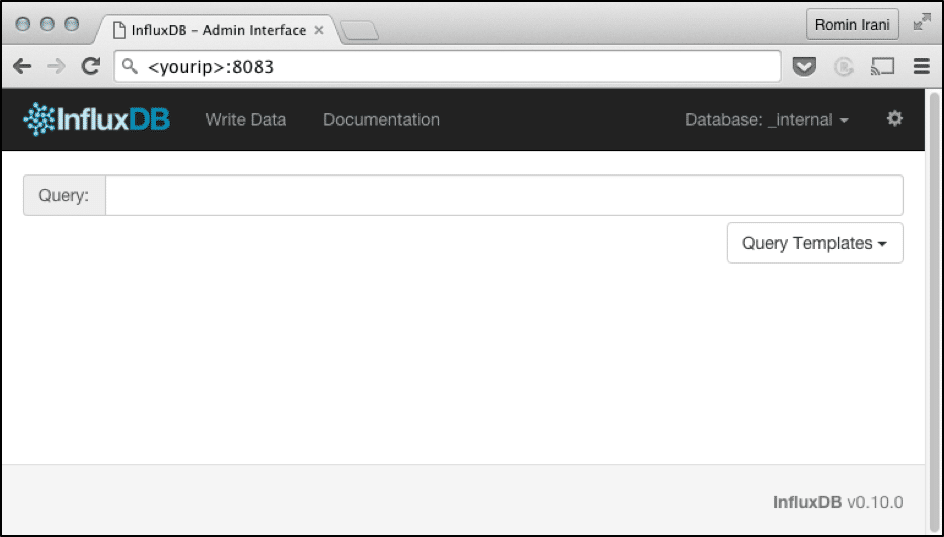 Click on the drop down in the top right named Database and you should see the temperature_db database that we created as shown below: 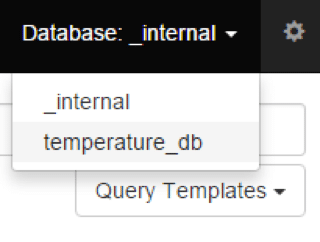 Select the temperature_db database and fire the query to select all records as shown below:

We have currently not setup any authentication/authorization for our InfluxDB Instance. This is definitely not recommended but for the purpose of this tutorial, I wanted to keep it simple. However, do note that you can set up users and the operations that they are authorized to perform in InfluxDB. Users can have roles based on access control to specific databases too. The steps are straightforward and can be found in the docs.