Following  CTO Paul Dix’s original release announcement for InfluxDB 2.0 and a new release of InfluxDB Cloud 2.0 to public beta, I thought the community would be interested in learning about how InfluxData provides a multi-tenanted, horizontally scalable time series storage.

Part One of this series introduced us to Kafka and some basics concepts of Kafka. We also learned about how Wayfair and Hulu use InfluxDB and Kafka to create fault-tolerant, scalable, fast data pipelines. It turns out that Hulu and Wayfair aren’t the only companies to take advantage of Kafka’s solutions. InfluxData uses Kafka in production as a sophisticated Write-Ahead-Log for InfluxDB Cloud 2.0, joining several other companies

What is a WAL?

A Write-Ahead-Log or WAL is a common practice across almost every performance database, including time series databases. It is a log, an append-only file, of the actions that are going to be made to the database. WALs have several advantages, but they are primarily used to maintain write durability and atomicity in database systems.

Durability — Persisting actions in WAL first ensures that those actions will be executed even if the database crashes. By logging the actions in WAL before making changes to the in-memory representation, the actions can be recovered and reapplied if needed, thereby ensuring write durability.

Atomicity — Atomicity refers to a database system property that is guaranteed to occur completely. If a server crashes midway executing various actions, the database can look at the WAL to find where it left off and finish the job, guaranteeing that the job will be executed completely.

Additionally, incorporating WAL batching is also a lot faster than doing exactly one mutation per WAL sync, which saves the client from long waiting times. Several time series database companies including Prometheus, Cassandra, Timescale, and InfluxDB all use WAL. However,  WALs have some disadvantages:

InfluxDB Cloud 2.0 uses Kafka as a WAL to overcome these disadvantages.

WAL worked great for Cloud 1.x because it only had to scale for a single tenant. Cloud 2.0 is not only multi-tenant, but the storage nodes in Cloud 2.0 are also like the OSS storage nodes — they are self-contained, individual storage engines that don’t communicate with each other. Still, Cloud 2.0 is more elastic and robust (it provides an SLA for 99% level). So, how is multi-tenancy and efficient horizontal scaling achieved? By complex data partitioning. This data partitioning is handled by Kafka. Kafka partitions are used as WALs and Kafka broker nodes provide the durability, scalability, and efficiency that InfluxDB Cloud 2.0 requires. Kafka acts as a very large, distributed WAL.

What makes Kafka a good solution for InfluxDB Cloud 2.0?

Kafka is a good solution because it helps InfluxDB Cloud 2.0 meet these requirements in the following ways:

Let’s take a look at the InfluxDB Cloud 2.0 storage tier architecture to get a better understanding of how Kafka helps InfluxDB achieve those requirements. 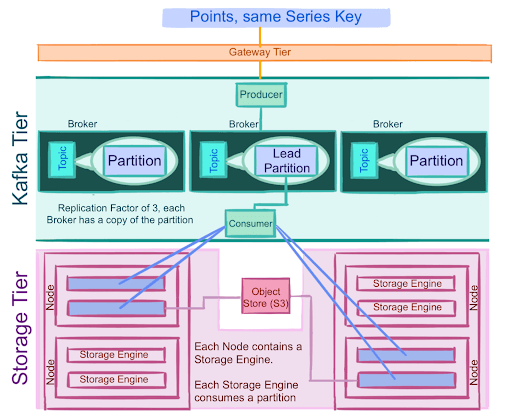 Using Kafka as a sophisticated WAL transforms InfluxDB Cloud into a horizontally scalable and multi-tenant time series database. Kafka is both durable and fast. Kafka’s durability provides confidence in that the users’ writes are safe and secure. Kafka’s speed eliminates bottlenecks and saves the client from long wait times. I hope this post gets you excited about InfluxDB Cloud 2.0 or at the very least Kafka. If you have any questions, please post them on our community site or Slack channel.