We made some significant improvements in the performance and functionality of the latest Influxdb-java client. In this blog post, let’s take a closer look at these improvements.

Performance is a key feature of any mission-critical system (a Time Series Database among them), and one of the most significant improvements we achieved with the latest InfluxDB Java Client (influxdb-java version 2.10) was an increase in ingest rate. The following is a summary from a profiling report on benchmarking the ingest rate between version 2.9 and 2.10.

The elapsed time difference between Config id (1) and (2) shows that the querying time drops by more than half. But it also means that the gain is a 2x the ingest rate in 2.10.

To examine what happened, we used YourKit to profile (1) and (2) and saw that: 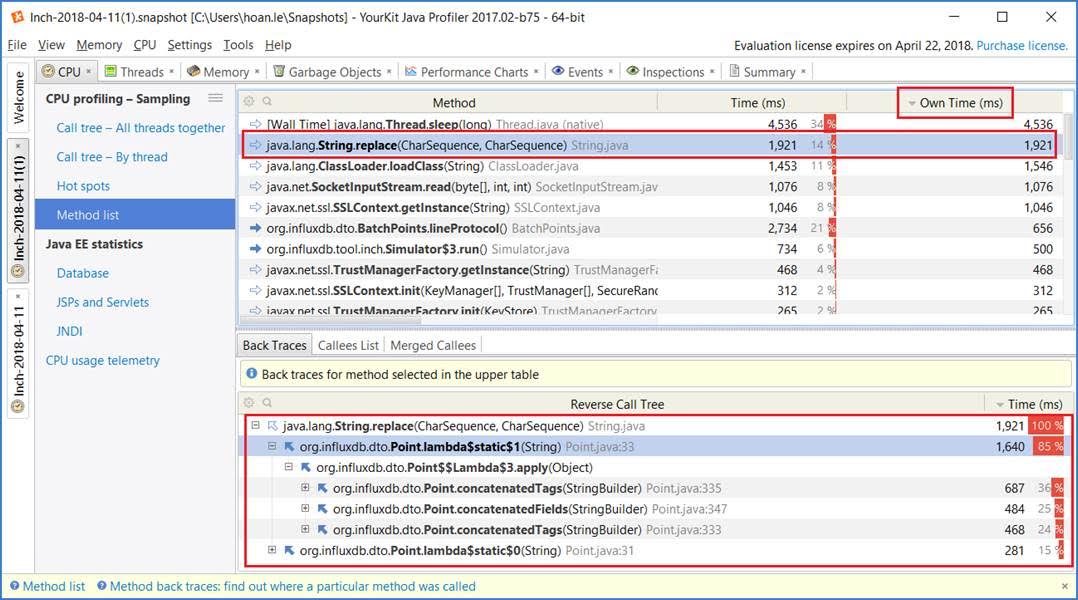 The following commit does not change the behavior but rather addressed the execution speed of it: Performance: Escape fields and keys more efficiently #424. Furthermore, the corresponding pull request specifically describes the Write performance improvements.

Object Allocation Recording is a heavy process, so the scaled-down scenario -t 10,10 was used. In the latest build, object allocation overhead is roughly 40% less than 2.9.

"MessagePack is an efficient binary serialization format. It lets you exchange data among multiple languages like JSON and it's faster and more compressed. Small integers are encoded into a single byte, and typical short strings require only one extra byte in addition to the strings themselves." (Source)

InfluxDB adopted MessagePack as the standard response format starting with version 1.4. Querying data in this lightway interchange format delivers significantly better performance. MessagePack was added in InfluxDB not only to improve query performance but also to address a limitation of JSON representing an Integer number. For more details, please refer to the original proposal.

MessagePack support is available in the InfluxDB Java Client beginning with version 2.12. Here is a quick comparison between JSON and MessagePack. We collected some performance measurements (in terms of querying time) for both MessagePack and JSON. The measurement was carried out on the following configurations: Intel Core I7 6700HQ, 16 GB RAM, Windows 10 Enterprise, InfluxDB OSS 1.6, influxdb-java client 2.12.

A relative improvement of around 25.74% was observed and 34.99% for the query that returns the full dataset of 4M points. We used the Eclipse Memory Analyzer to analyze the heap dump of QueryComparator process and show the difference in the retained size of the QueryResult objects. The following table shows the results of the memory heap analysis:

In this rather generic case, MessagePack used 17.7% less heap. The reason is MessagePack encodes the time value as a Long value, and it uses less memory in general. JSON formats time as a String and therefore becomes more resource-intensive as the strings are transformed than MessagePack.

We also added some functionality improvements that enhance the enterprise readiness of the influxdb-java client. The following focuses on the behavioral aspects of the client such as reliability, resilience and robustness.

When an InfluxDB server exceeds its limits, it starts spitting out various error states. Eventually the clients may hang without a response until they time out. If there are many clients connecting to an unresponsive influxdb server, then the system can consume all critical resources and will cascade into a failure across the entire system. A common pattern to address this situation is for the clients to back off and retry after the server returns to normal. This pattern is currently applied in Telegraf to guarantee reliabilitytogether with the other techniques described below.

Database access normally consists of sending certain query language statements to the database. Each database access consumes a certain amount of overhead at both the client and server side. Sending these language statements separately causes the database server to repeat overheads wastefully. So in general, batch writing is the method used to tackle database optimization (since most modern databases support this). Both InfluxDB and influxdb-java support batch writing. For a InfluxDBImpl instance, we can enable batch writing by a BatchOptions instance.

In the snippet above, we enable batch writing with the following options:

The actions and flushDuration are the two most basic options of batch writing support in influxdb-java.

Telegraf implements a variable flush interval on internal buffers so that a load of multiple nodes can be spread over time with no repeated spikes when multiple clients get synchronized and write batches to InfluxDB at the same time. This feature was implemented in influxdb-java 2.9.

For example, with the following options, the next real flushDuration will stay somewhere from 80 ms to 120 ms.

This is how the response looks - InfluxDB configuration parameter cache-max-memory-size = 104:

It makes sense to retry the request when the cache gets emptied. Here is a list of errors returned by InfluxDB to help indicate that it does not make sense to retry the write. This is due to the points having already been written or the repeated write would fail again.

Telegraf keeps writing failed measurements until these are written. There is no limit on the number of retries, as seen in Line 126. Telegraf checks specific errors from InfluxDB so that measurement writes that can’t be fixed by retrying aren’t written over and over.

There is a limit on the buffer of failed writes: 10000 entries by default. Additional failed writes replace the oldest entries in it when it gets filled. This feature has been implemented in influxdb-java 2.9. The client maintains a buffer for failed writes so that the writes will later be retried, which helps to overcome temporary network problems or InfluxDB load spikes.

When the buffer is full and new data points are written, the oldest entries in the buffer are evicted. In practice, we enable this feature by setting bufferLimit in BatchOptions to a value greater than actions, as shown in the snippet example below:

We have set a retry bufferLimit at 500 data points. Then assume writeSomePoints() fails on some recoverable error (such as cache-max-memory-size), the client will later retry to write the failed points until they are successfully written. Failed points will be evicted from a retry buffer if the buffer becomes full and new points keep arriving.

These changes have made the InfluxDB Java Client better, more enterprise-ready, and consistent with the behavior of the Telegraf client.