At InfluxData, one of the common questions we regularly get asked by developers and architects alike is: “How does InfluxDB compare to Elasticsearch for time series workloads?” This question might be prompted for a few reasons. First, if they’re starting a brand new project and doing the due diligence of evaluating a few solutions head-to-head, it can be helpful in creating their comparison grid. Second, they might already be using Elasticsearch for ingesting logs in an existing monitoring setup, but would like to now see how they can integrate metrics collection into their system and believe there might be a better solution than Elasticsearch for this task.

It’s also important to note that configuring Elasticsearch for time series wasn’t trivial  it requires up-front decisions about indexing, heap sizing, and how to work with the JVM. InfluxDB, on the other hand, is ready to use for time series workloads out of the box with no additional configuration with a schema and query language designed for working with time series.

We felt that this data would prove valuable to engineers evaluating the suitability of both these technologies for their use cases; specifically, time series use cases involving custom monitoring and metrics collection, real-time analytics, Internet of Things (IoT) and sensor data, plus container or virtualization infrastructure metrics. The benchmark exercise did not look at the suitability of InfluxDB for workloads other than those that are time-series-based. InfluxDB is not designed to satisfy full-text search or log management use cases and therefore would be out of scope. For these use cases, we recommend sticking with Elasticsearch or similar full-text search engines.

To read the complete details of the benchmarks and methodology, download the “Benchmarking InfluxDB vs. Elasticsearch for Time Series Data & Metrics Management” technical paper or watch the recorded webinar.

Our overriding goal was to create a consistent, up-to-date comparison that reflects the latest developments in both InfluxDB and Elasticsearch with later coverage of other databases and time series solutions. We will periodically re-run these benchmarks and update our detailed technical paper with our findings. All of the code for these benchmarks is available on Github. Feel free to open up issues or pull requests on that repository if you have any questions, comments, or suggestions.

InfluxDB is an open source Time Series Database written in Go. At its core is a custom-built storage engine called the Time-Structured Merge (TSM) Tree, which is optimized for time series data. Controlled by a custom SQL-like query language named InfluxQL, InfluxDB provides out-of-the-box support for mathematical and statistical functions across time ranges and is perfect for custom monitoring and metrics collection, real-time analytics, plus IoT and sensor data workloads.

Elasticsearch is an open-source search server written in Java and built on top of Apache Lucene. It provides a distributed, full-text search engine suitable for enterprise workloads. While not a time series database per se, Elasticsearch employs Lucene’s column indexes, which are used to aggregate numeric values. Combined with query-time aggregations and the ability to index on time-stamp fields (which is also important for storing and retrieving log data), Elasticsearch provides the primitives for storing and querying time series data.

Since Elasticsearch is a special-purpose search server and not intended for time series data out of the box, some configuration changes are recommended by Elastic for storing these types of metrics. In our testing, we found that these changes:

InfluxDB outperformed Elasticsearch by 3.8x when it came to data ingestion. 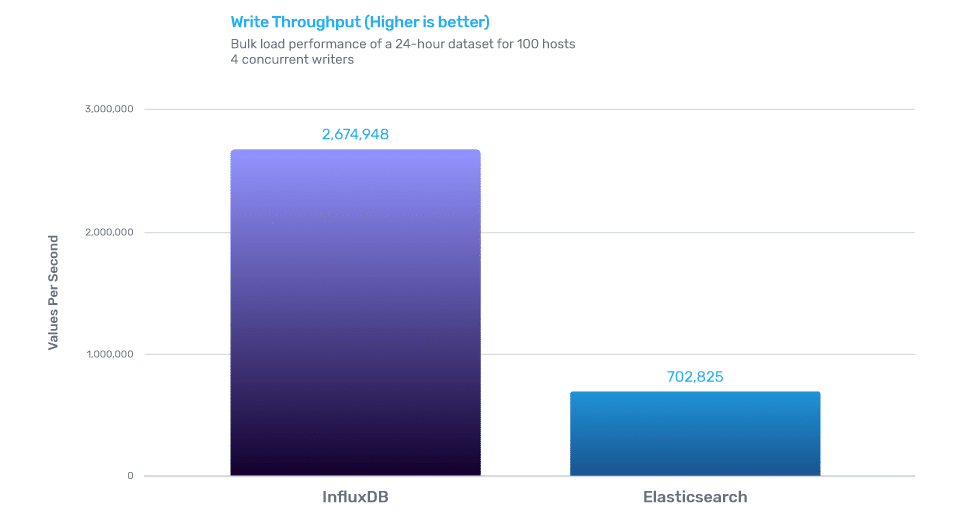 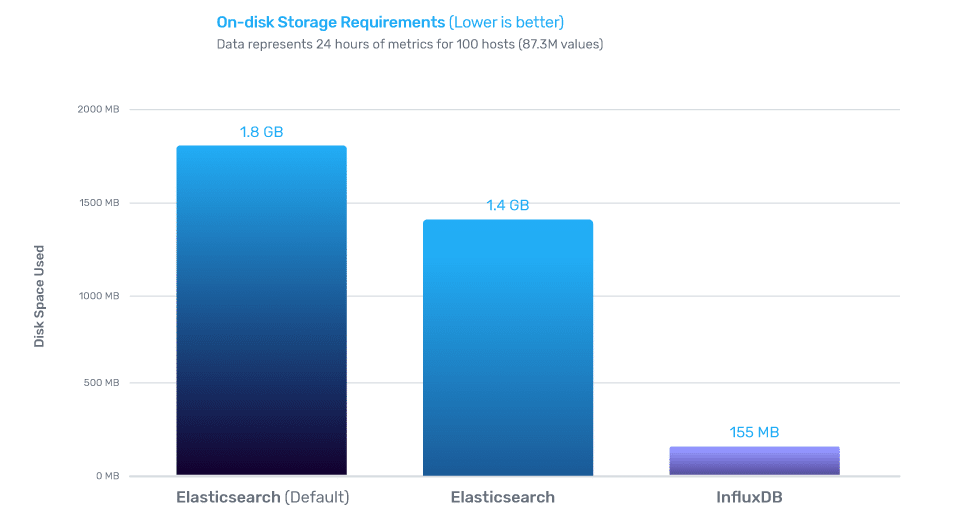 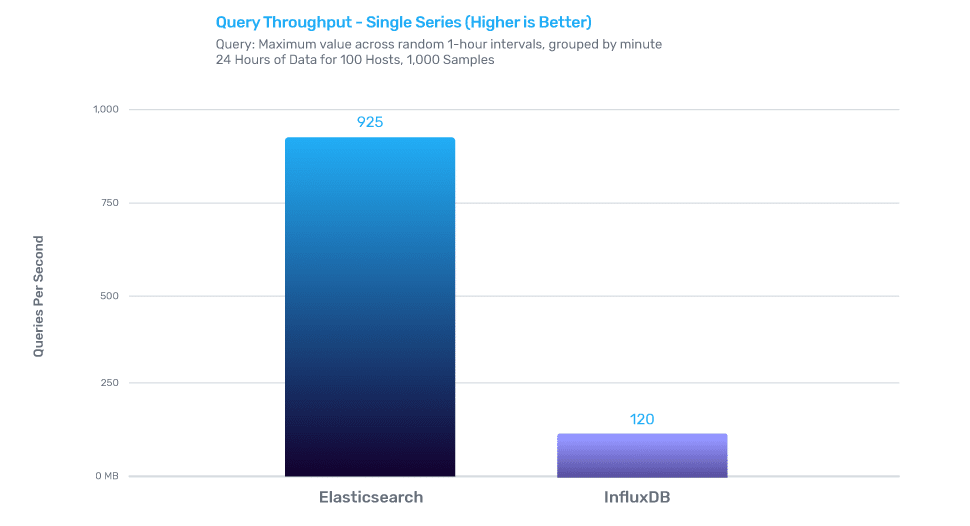