The Value of Modern Time Series in the Age of Instrumentation

A zeptosecond is an impossibly small unit of timealmost unfathomable. It is 10?21 of a second or one sextillionth of a second. Technically, the time it takes the electron to change its quantum state from the very constricted, bound state around the atom to a free statewhich is currently the quickest time ever observedis 850 zeptoseconds. Given that a discrete zeptosecond is not observable by any instrument yet invented, you may safely ignore for the time being that measurement resolution.

However, what you do ignore at your own peril is the fundamental human desire to measure change over time. Anthropologist and cyberneticist Gregory Bateson said that all learning is fundamentally “News of Difference.” Simply put: what changed in what I am observing? What is different? From a technology perspective, what you can’t ignore is that our ability to measure change over time is in the early stages of what I call the “Age of Instrumentation” which might just simply be another way to say IoT.

With the steady evolution of cheap sensors, ubiquitous networks, smart gateways, and cloud-native backends, our ability to instrument, monitor, and control the physical world is strengthening rapidly. As we have been told thousands of times since the advent of the connected toaster in the early days of the internet, everything will be connected. This is now a reality, and much of the next generation of infrastructure and services will be designed and built with this narrative in place. Everything that can be instrumented will be instrumented.

This means that information about the state of the physical world will be easier and easier to obtain. We will have at our disposal a steady stream of data thatwhen coupled with machine learning and evolving AIwill amplify our ability to act with intent and purpose on that world (for better or worse). This is not the future. This is the here and now. One only needs to look at applications like traffic navigation, self-driving car technologies, and increasingly smarter buildings to see what the future will look like.

One indication of the future’s arrival today is the rise of Time Series DBMS as the fastest growing category among the variety of DBMS platforms over the last 12 months, according to DB-Engines. Time Series DBMS are quite simply data management platforms that are purpose-built for collecting, storing, querying, downsampling, visualizing and acting upon measurements (time stamped metrics and events) that are being pulled or pushed from the instrumented physical world. 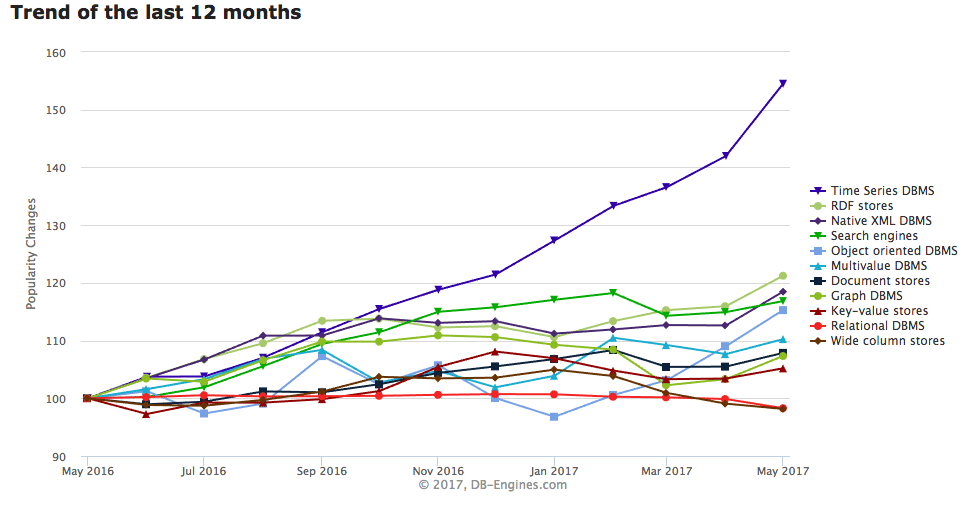 We at InfluxData believe that this trend will continue for the foreseeable future, and we are excited to be investing aggressively to do our best to service this new “instrumented” world. We have developed a modern Time Series Platform built from the ground up for metrics and events (time series data). Read more on what constitutes modern.

We see our customers instrumenting everything in the physical world from wind turbines to smart shower-heads to solar panels. They are collecting this data, analyzing it, processing it, controlling systems and predicting future behavior based on it. They are doing much of this in real time. And we are really only just beginning.

It’s not just the physical world that we are instrumenting. With the rise of containers, the emergence of microservices, and serverless architectures, the surface area to instrument in the virtual world is growing at an even faster rate than in the physical world. In the world of software, we are slowed only by code changes – not by material ones.

Needless to say, we at InfluxData are long on time series data. We believe that the foundation for the age of instrumentation will be Time Series Data Platforms. With the march of science and the inevitable human desire to know, measure, and control our world, time series data will be the lingua franca, and metrics and events will be the vowels and consonants of the Internet of Things, The Age of Instrumentation, The Connected [whatever expression you want to use to describe this new epoch].

And finally coming back to measurements: while you can safely ignore zeptoseconds for a while, you might be intrigued to know that we have a number of customers already collecting nanosecond measurements for their quantum computing projects. Time marches on.