The Telegraf Elasticsearch plugin is really easy to use, and it can show you a lot of useful information. To begin, let’s get the InfluxDB sandbox up and running as well as an Elasticsearch node that we can populate with some data using Kibana.

Then navigate to localhost:5601 and click on “Dev Tools” in the left sidebar and you should see something like this:

This is the Kibana UI from which you can make requests to your Elasticsearch node.

I recommend playing around with your Elasticsearch node and Kibana using the tutorial here. It will show you how to populate your node with data and check cluster health (a cluster consists of one or more nodes, so you also have a cluster). For example, running

in Kibana will create a user index and insert a user with an id of 1. And running GET /user/_doc/1?pretty in Kibana will fetch that user and return

Now that you’ve got some indexes populated with data in your Elasticsearch node, it’s time to monitor the node! First, if you’ve got the sandbox running, shut it down with ./sandbox down.

Then open up the sandbox code in your favorite editor and navigate to telegraf/telegraf.conf. This is where you will find the various input and output plugins that come configured with Telegraf, and also where you will add the configuration for the Elasticsearch plugin.

Copy and paste the configuration from the Elasticsearch plugin README at the bottom of your telegraf.conf file, like so:

Save the file and spin up the sandbox again with ./sandbox up and navigate to the Chronograf tab that opens up at localhost:8888. Click “Explore” in the left-hand navigation bar. Then click “Flux” to switch to using Flux for queries. 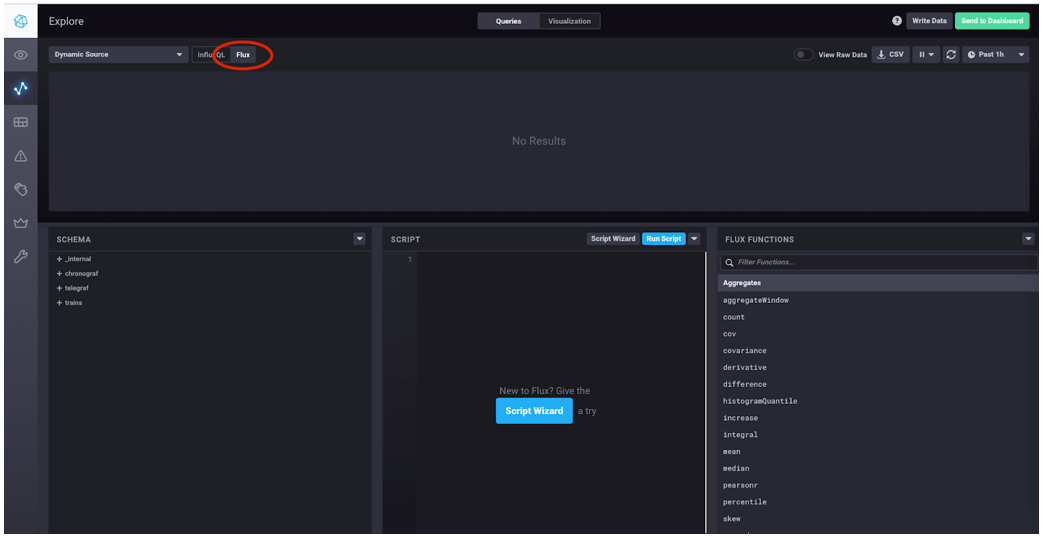 Then, under “SCHEMA,” click “telegraf,” then “MEASUREMENTS,” then “elasticsearch_indices,” then “Add Filter” next to “docs_count.” This will construct a Flux query in the SCRIPT block:

Click “Visualization” at the top of the page and select “Single Stat.” Then click “Queries” to get back to the query block, and click “Run Script.” You should see in the top block on the page the number of documents (at least one) that you created using the Elasticsearch tutorial. This is the kind of data that you can see with the Elasticsearch plugin.

There are several other metrics available to you, and you can actually visualize some of those metrics by pulling in the pre-built dashboard. To do so, click “Configuration” in the left hand navigation bar and you will see your InfluxDB connection. Click on the name of that connection:

Then click “Update Connection” in the window that pops up:

Then scroll until you see “Elasticsearch,” and click on that box:

Click “Create 1 Dashboard.” Click “Skip” when you are asked about your Kapacitor Connection then click “Finish.” Then click “Dashboards” in the left-hand navigation bar, and you should see your Elasticsearch dashboard in the list. Clicking on that will take you to the dashboard itself:

And that’s it! You’ve now successfully installed Elasticsearch and are able to monitor its performance using the Telegraf plugin as well as use the included dashboard to visualize some critical Elasticsearch metrics.