Webinar Highlights: How EnerKey Uses InfluxDB and Azure to Save Customers Millions

EnerKey’s CTO Martti Kontula recently presented on how EnerKey uses InfluxDB Enterprise and Microsoft Azure to power their IoT platform which enables their customers to save millions of euros! Their analytics platform uses sensor data to detect energy usage fluctuations triggered by weather and geospatial data. If you missed attending the live session, we have shared the recording and the slides for everyone to review and watch at your leisure.

Martti Kontula, CTO at EnerKey, started off the webinar by providing a fantastic overview of who Enerkey is. He illustrated that their mission is to enable customers to become more sustainable while also saving money. Martti proved the power of EnerKey’s platform by sharing some customers’ stories. Their customers include: retail companies, city and local government municipalities, schools and commercial real estate organizations. One of their customers is Kesko, which is a large retail and grocery store company, who has improved their monitoring systems, refined their metering and have become more energy-efficient. Thanks to EnerKey’s platform, they have saved 5 million euros a year! I was impressed when he demonstrated that EnerKey has over 80 out-of-the-box integrations with various data sources including energy/utility companies, IoT devices, solar power systems and more. Some of their integrations include: Schneider Electric, Excel, MySQL, Sensire, OpenAPI Initiative and Fingrid Datahub.

Next, Martti provided an overview of their product and the challenges that they are addressing. EnerKey’s solution helps commercial real estate owners and managing companies to understand their facilities better, even when they are geographically distributed. By collecting time series data in real time, they are able to collect all energy consumption data regardless of format and are able to analyze it. Some of the data they’re collecting encompasses: heating and cooling, CO? emissions, temperature, water and electrical usage. InfluxDB is used to store the raw time series data, while the metadata about the facilities and buildings is stored in Azure SQL.

Martti walked us through the nearly 30-year history of EnerKey. As with any company, things evolve over time. The organization started off as Energiakolmio, and in 2014 it was rebranded as EnerKey. When Martti joined in 2016, he was hired as an Enterprise Architect. Since then, he has been promoted and is now their Chief Technology Officer.

EnerKey had come to the conclusion that their original VM-based Microsoft SQL server was expensive and its performance was lagging when it came to collecting and storing time series data. Prior to picking InfluxDB, Enerkey considered other options including: PostgreSQL, MongoDB and Cassandra. Their team began to play with InfluxDB, the open source time series database in 2016. They were impressed with InfluxDB’s high ingest and output rates and other key functionalities. By 2017, they decided to move forward with InfluxDB Enterprise. By late 2019, they had moved all of their data from their legacy tool to InfluxDB. As always, it’s interesting seeing customers’ data architecture as everyone’s is unique! 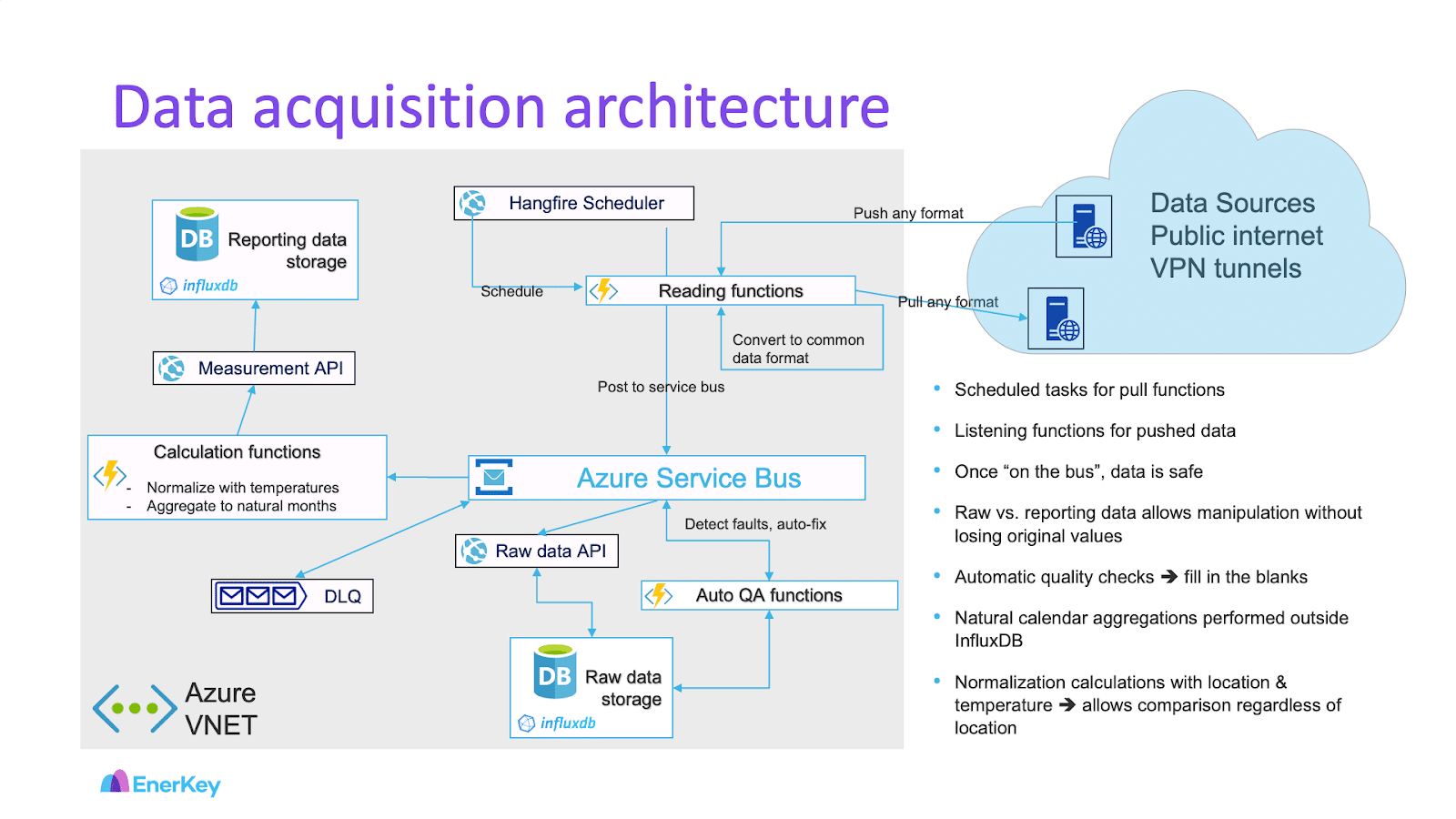 Martti gave us a glimpse into what EnerKey is working on right now. To further enhance their competitive advantage, they are using InfluxDB and machine learning models for advanced analytics. They are comparing energy usage between similar buildings to better understand fluctuations. This way, their customers are able to look at the bigger pictures (their entire portfolio of buildings) and are also able to drill down into a specific building. For example, they are comparing two separate buildings which are geographically and physically similar. They’re realizing that outdoor temperature changes, by even just one degree, have a direct impact on energy usage recorded by the meters.

Audience members had lots of questions for Martti  here are a couple of them.

Question: Why did you choose Azure SQL instead of on-prem SQL? Answer: Our entire platform is in Azure, and with Azure SQL, we had lower latencies during data transfers between our backend API’s and the database. We are aiming to be cloud-native in all aspects, rather than on-premises. We also like having the ability to scale up by simply pulling a slider with our mouse.

Question: Which version of InfluxDB are you using? Are you using Flux? Answer: We’re currently running InfluxDB Enterprise 1.x. Back in 2017, we did consider InfluxData’s cloud option, and we’re still very interested in InfluxDB Cloud  I’d love to migrate to the Cloud. We are looking at Flux as it has the ability to mix different data sources.

If you’re interested in checking out the full webinar and listening to the rest of the Q&A, click here!