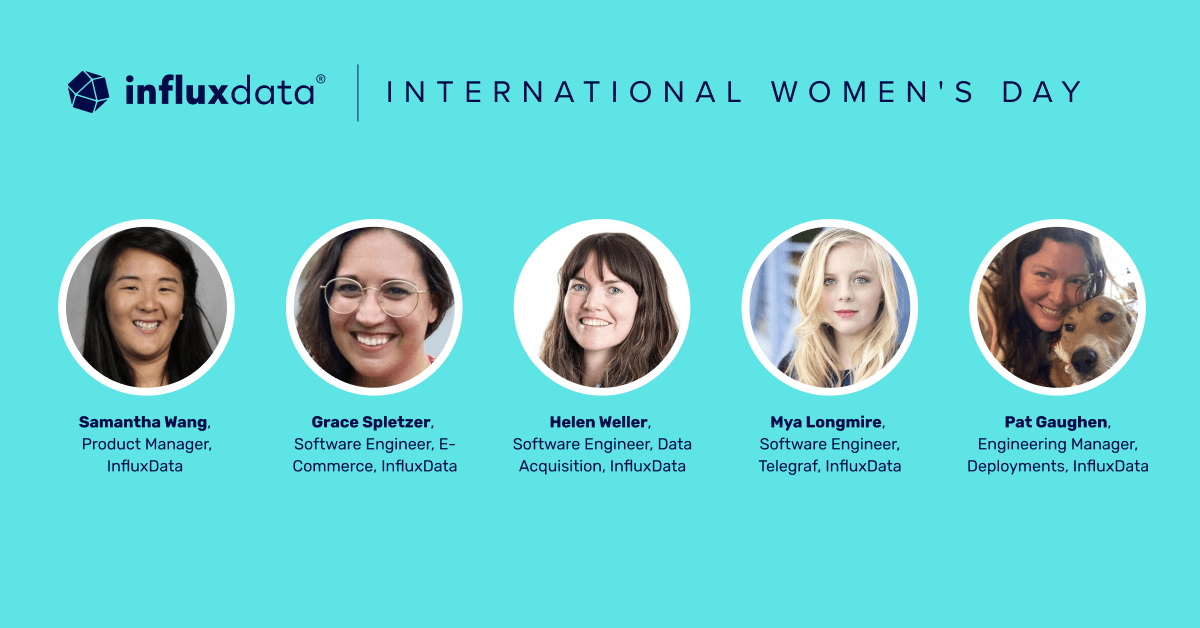 This begs the question: How can we get more women involved in open source projects?

Who better to provide insight on this question than some of those women actively contributing to open source projects? As International Women’s Day kicks off, I asked several of my colleagues at InfluxData, an open source company, about this very topic. Here’s what they had to say.

What are some of the barriers to entry for open source that may make it especially difficult for women to get involved?

“Contributing to open source immediately opens you up to criticism. If you’re still trying to gain confidence in your knowledge and skills, sharing your code can be overwhelming. It takes a lot of confidence to put yourself out there, to share your code, to find a place where you feel you can make a difference, and to receive feedback (that can be very blunt). The whole experience is very intimidating. However, it’s helpful to try to keep some perspective. In reality, getting blunt feedback is better than not hearing anything at all. That means someone took the time to look at your work, so getting that feedback is better than wondering if you did your PR right, or if your email even went through. Finally, it’s important to remember that making a difference doesn’t always mean making a big change: start small and keep at it.”

Any advice for women regarding front-end vs. back-end specialties?

“If you feel a particular pull towards front-end or back-end, lean into it. Having a passion for one or the other makes it easier to specialize and to take the deep dive into the technology and standards that accompany it. At the same time, don’t completely write-off the end that doesn’t interest you since you need both in your application’s ecosystem; it never hurts to stay informed about the general changes and technology used on the opposite end.”

“It depends on what you want to do, really. I think of front-end as making an application look nice and having a good user experience. Back-end is all the behind-the-scenes stuff, the mechanics of a program and making the things happen that you don’t actively think about. Both are great options, so go with whatever interests you. Skills transfer between the two areas more than you might think, so it is never too late to switch or even do both!”

Has a woman mentor or hero made a difference in your career?

“I don’t have a specific person, but when I started in open source I was fortunate to work near some amazing female open source developers. We didn’t work directly in the same areas of code, but we had each other to check in with and we tended to boost each other up. Having that kind of support was a big deal.”

“InfluxData is the first company where I’ve been able to work with other women developers, let alone female managers. I recommend seeking out at least one female role model in some capacity. I think if I could go back a few years, I would have told myself to seek out a female mentor sooner!”

“I’ve been fortunate to befriend some incredible women in this field, but one specifically comes to mind. She is a former colleague who was a senior engineer. She gave a lot of great advice about how to ask questions, how to fill my knowledge gaps, and how to define my own boundaries between work and personal life, particularly in regard to remote work life where it is easy to burn out and overwork yourself. Having someone offer that insight so early in my career has given me a strong foundation for building my skills, while also maintaining healthy work habits.”

“I had a female Computer Science professor in school, Amy Knowles, who taught Intro to CSE and Data Structures and Algorithms. She stood up for me and ensured I had all the resources I needed to succeed. It was nice to know someone was on my side and would help me figure out how to handle the sexism in the tech industry.”

How can we get more women contributing to open source projects?

“We need to make it easier to get started. That may include something like a primer that makes it clear how to contribute, how to ask for help, how to find an “easy first issue,” and what to do if your PR isn’t moving. If we can demonstrate through our actions that the community around your open source project is inclusive, then hopefully more women will feel comfortable contributing.”

“I hope that being a woman contributing to open source projects inspires other women to contribute. But for me, it was really helpful to ‘find my tribe’ so to speak, by getting involved in as many groups as possible such as WomenWhoCode and CoderDojo. I also serve as a mentor at the coding school I went to. That has helped me feel more of a sense of belonging in STEM. Connecting with people of different strengths, backgrounds, and levels helped me overcome some imposter syndrome feelings, too.”

Perhaps the most critical thing aspiring developers can do is find other women developers and get to know them. Seek out mentors. Build and maintain relationships. Don’t be afraid to ask questions, and don’t be afraid to report abuse or harassment. Surround yourself with peers, managers, and leaders that support you when you speak up and aren’t afraid of tackling uncomfortable situations. Also, being aware that because there are so few women contributing to open source, there is a sense of comfort or excitement when women come across contributions from another woman developer. That is the kind of connection that can inspire more women to jump into open source.