Oktoberfest festivities may look a little differently this year, but that doesn’t mean the InfluxDB community can’t celebrate at home. Speaking of Oktoberfest (by default associated with beers!), Luke Bond uses Telegraf and InfluxDB to monitor fermentation temperatures as he makes beer at home. So can you! ????

Oktoberfest Fun Fact #1: It wasn't originally a beer festival  it was originally a celebration to commemorate Bavarian Crown Prince Ludwig's marriage in 1810.

Who is Luke Bond?

Oktoberfest Fun Fact #2: Attendees at the annual festival can't start drinking until the Mayor of Munich opens the first keg. The mayor will proclaim "O' zapft is" which means "It's tapped!'.

At a high level, there is always a sugary liquid needed for fermentation. When making beer, this solution is malted barley. The yeast will consume the sugar and convert it into alcohol and carbon dioxide. The solution starts off as a flat, sweet and dense liquid and eventually turns into a lighter fizzy alcohol liquid. Craft beers are becoming more popular today, and when making these beers, people are using grains beyond just barley.

Oktoberfest Fun Fact #3: In 2019, Oktoberfest attendees, from 55 nations, consumed around 7.3 million liters of beer! The amount of beer drank at the festival could fill more than three Olympic-sized swimming pools!

How is beer made?

As seen above, brewers at home are generally able to skip the milling step and go straight to the mash tun. Usually homebrewers will purchase grain that has already been malted and milled. Luke’s setup is even easier as the mash tun and kettle are the same machine. It is common for homebrewing setups to include a machine that does both. Filtering is less common at home, as it requires more machines. Packaging at home means bottling or pressure-transferring it into a keg.

Oktoberfest Fun Fact #4: Beer consumed at Oktoberfest must be brewed in Munich. The beer must be made within the city walls and come from one of the six special historical breweries.

Fluctuations in yeast temperature can result in undesirable flavors; this is usually the cause of the common “homebrew smell”. Most home brewing yeast needs to be at 18-21ºC (64-70ºF). It’s more important to have the temperature consistent. As Luke points out, it is better to be consistently at 20ºC rather than fluctuating between 18-20ºC.

Luke needed to be able to monitor the ambient temperature in his home to ensure the temperature was ideal and consistent for his beer-making projects. There are various ways to control yeast temperature including: pure luck, affordable DIY solutions and expensive solutions. Space and financial resources are the biggest limiting factors.

Prior to using InfluxDB, Telegraf and Raspberry Pis to monitor everything, Luke had to check the temperature manually. He needed to be able to remotely monitor and tweak the temperature of his fermentation setup. He had all of the data available to him, but it wasn’t automated. Everything from ice melting, environmental temperature changes, and other equipment in use emitting heat (i.e. controllers and pumps) can unintentionally heat the beer too much.

Oktoberfest Fun Fact #5: Locals call the festival Wies'n (short for Theresienwiese) which translates to "Theresa's fields". This refers to Princess Therese of Saxony-Hildurghausen who married the prince in 1810.

Automate everything! Luke now uses a myriad of technologies to collect and analyze metrics about his beer-making activities. He uses Telegraf to collect temperature metrics and sends them to InfluxDB. Once the metrics are in the purpose-built time series database, he easily creates useful dashboards and alerts.

Luke has a cooler that automatically turns on to reduce the temperature. After the dramatic drop, the temperature begins to slowly climb again. He added code to reject values above 28ºC  this resulted in a lot of erroneous notifications. His dashboards even show a time where he must have accidentally kicked the webcam while passing  his graph displayed a lot of rapid up and down. Luke created a rule where he gets an alert in Slack whenever the temperature rises above 21ºC. This indicates that he needs to check the ice level. He also received deadman alerts when there was no data coming into InfluxDB.

Oktoberfest Fun Fact #6:  In 1896, Albert Einstein was working as an electrician who helped set up one of the beer tents.

There are countless types of beers out there, and Influxers enjoy their hops! When polled, InfluxData employees shared some of their favorite beers. 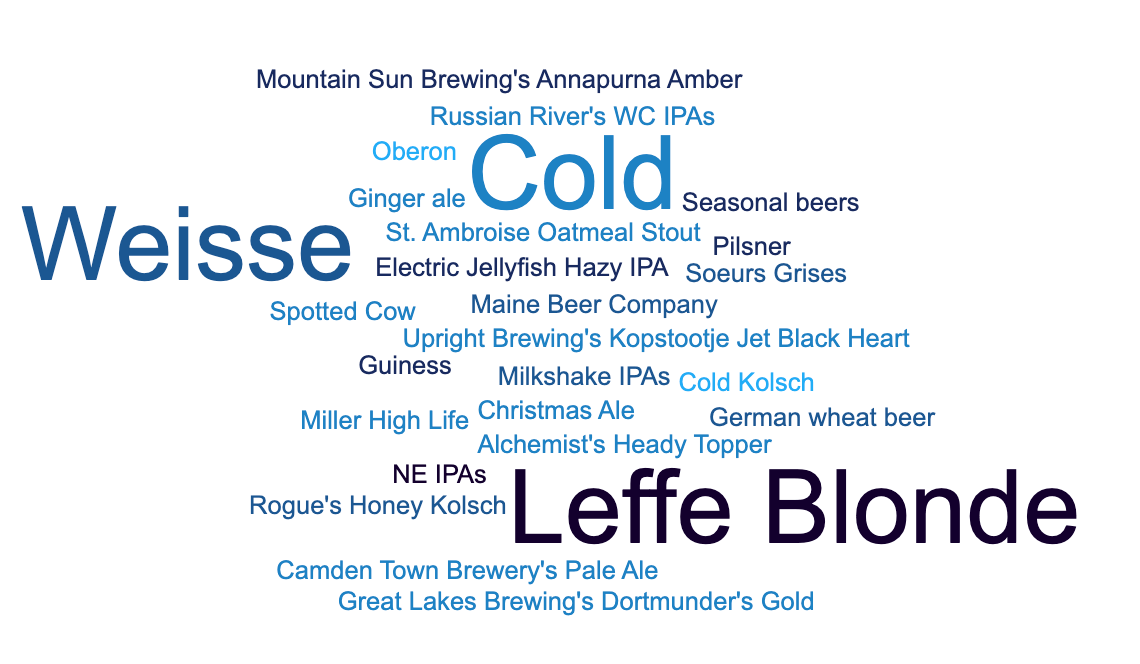 To learn more about how Luke uses InfluxDB to monitor his homebrewing setup, check out the recording and presentation here. Whether you’re making your own beer at home or enjoying a local microbrew at home, we hope everyone has fun celebrating Oktoberfest! ????