How to Setup InfluxDB, Telegraf and Grafana on Docker: Part 1 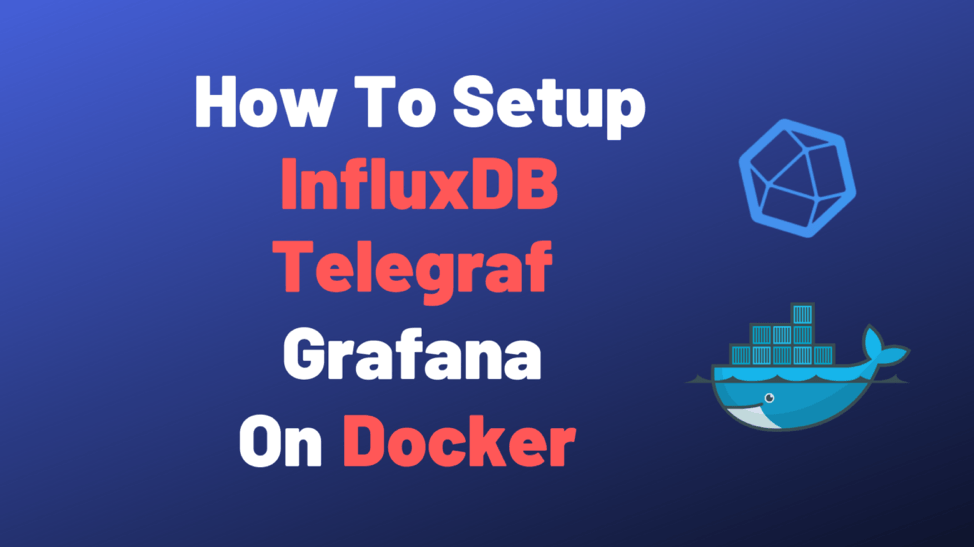 Built in 2013 by InfluxData, InfluxDB is by far one of the most-used time series databases for DevOps monitoring and dashboarding. Used by many successful companies worldwide, InfluxDB is often deployed in distributed and often multicloud. Docker can serve as a good fit for many organizations as a virtualization environment that provides an easy way to create, manage and delete containers on the fly. If you are trying to build reliable monitoring architectures, one solution would be to install InfluxDB on Docker and to manage it with Kubernetes.

In Part 1 of this tutorial series, we cover the steps to install InfluxDB 1.7 on Docker for Linux instances. Then later, we will describe in Part 2 how to install the Telegraf plugin for data-collection and the Grafana interface with InfluxDB 1.7 and Docker. To note, InfluxDB will soon become InfluxDB 2.0, which will serve as a a single platform to manage all the components of the TICK Stack. Another tutorial about how to install and set up for InfluxDB 2.0 is coming soon. Before you begin, it is important to ensure that all the prerequisites are met to install InfluxDB on Docker.

First of all, you need to have sudo rights on your Linux machine; otherwise, you won’t be able to install InfluxDB on your host.

To verify it, run the following command:

If no error messages are shown on your terminal, you are good to go.

Next, you want to make sure that Docker is correctly installed on your system.

The tutorial “How To Install Docker on Ubuntu 18.04 and Debian 10” offers thorough details on how to correctly set up Docker on Linux. Once again to verify that Docker is correctly installed, you can run the following command:

Now that Docker is ready, let’s have a quick look at the networking strategy we are going to use for our containers.

Designing the network strategy for InfluxDB

Before you begin, it is important to review a few details about networking. By default, newly created containers run on the bridge network stack. In addition, after you install InfluxDB, it will be exposed to useful ports (such as port 8086) on your network stack. Later, you can also bind Telegraf to it, but Telegraf does not have to expose any ports to your current host stack.

Let’s run InfluxDB on the default bridge network, and have Telegraf running in the same stack as InfluxDB. In addition, we will add Grafana to our bridge network in order to visualize metrics gathered by Telegraf. 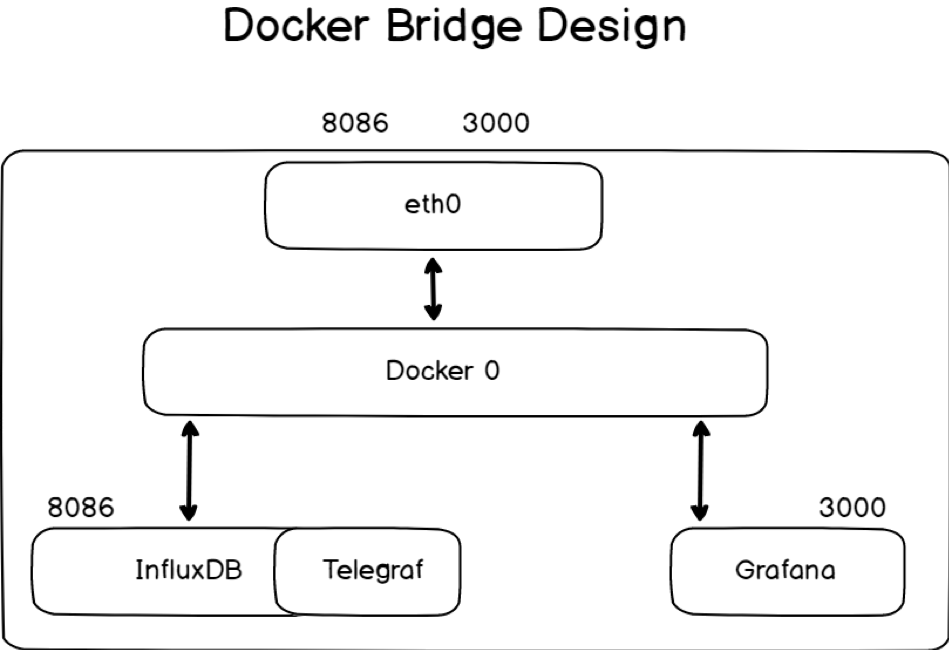 Now that we have seen the network strategy we are going to use, let’s install the InfluxDB container for Docker.

To install InfluxDB on Docker, you have two ways of doing it.

You can prepare your filesystem manually, and run the InfluxDB on a Docker container with no initialization scripts. This is the simplest way to initialize InfluxDB. This method should be used if you plan on running InfluxDB on a single instance, and if your initial InfluxDB configuration is very simple, or if you prefer to have full control over your containers.

However, there is a way to initialize InfluxDB with scripts (either bash scripts, or InfluxQL scripts). You should do this if you are automating a lot of servers with InfluxDB (with Chef or Puppet for example), and you want to have the same initial setup on all your instances.

The official InfluxDB image for Docker is called influxdb.

The InfluxDB image will install the InfluxDB server responsible for storing time-series metrics on your system.

If you are familiar with Docker, you already know that you can map volumes from your local filesystem to your container in order to manipulate data easier in your container. This is exactly what we are going to do in this tutorial.

Configuration files, as well as directories storing actual data, will be stored on our local filesystem.

If you carefully follow the tutorial on setting up InfluxDB on Ubuntu, you know that you are going to create a specific user for your InfluxDB database.

In your etc directory, create a new folder for your InfluxDB configuration files.

Creating a configuration file for InfluxDB and Docker

As a quick explanation, the influxd config command will print a full InfluxDB configuration file for you on the standard output (which is by default your shell).

As the –rm option is set, Docker will run a container in order to execute this command and the container will be deleted as soon as it exits. Instead of having the configuration file printed on the standard output, it will be redirected to our InfluxDB configuration file.

Next, reassign the folder permissions for your newly created file; otherwise, your container won’t be able to interact with it properly.

Creating a lib folder for InfluxDB and Docker

As stated in the documentation, InfluxDB stores its data, metadata as well as the WAL (for write-ahead log) in the /var/lib/influxdb folder by default.

As a consequence, you have to create this folder if it does not currently exist.

Again, make sure that the permissions are correctly set for your container to write into this folder.

Now that our folders are ready, let’s see how we can initialize InfluxDB with custom scripts.

With the InfluxDB image, there is a way to automate the database initialization on your containers. As an example, we will instruct our Docker container to create an administrator account, a regular user account (for Telegraf), and a database with custom retention via a custom InfluxQL script.

Anatomy of the InfluxDB image

The entrypoint can be executed in two ways.

You can execute the entrypoint script in order to launch a simple InfluxDB instance on your container. This is for example what we have done in the previous section. We specified the configuration flag, and it was used in order to set your InfluxDB server initialization.

However, there is a second way to execute the entrypoint script: by executing the init-influxdb script.

The init-influxdb script is made of two parts:

We are going to use this information to create our InfluxDB container.

First, make sure that no folders are already created in your /var/lib/influxdb folder.

Execute the following command for the meta folder (in the influxdb folder) to be updated with the correct information. As a reminder, we want an admin account and a regular account for Telegraf (named telegraf).

Creating initialization scripts on your host

In order for the initialization scripts to run on initialization, they have to be mapped to the docker-entrypoint-initdb.d folder in your container.

First, create a scripts folder on your host wherever you want. In my case, it is going to be created in /etc/influxdb.

Edit a new script file on your newly created folder, and make sure to give it a .iql extension:

This a simple initialization script that will create a database for weather data, and it will assign a one-week retention policy for the database.

The last step will be to prepare our meta folder for InfluxDB initialization.

In order to update your meta database, run the following command:

If you chose to create initialization scripts for your container, you should also have a log line for it.

As a last verification step, you can inspect your meta.db file in your meta folder to make sure that the changes were correctly written.

Now that your InfluxDB files are prepared, let’s head over to some configuration verifications.

Verifying your InfluxDB configuration for Docker

If you used the configuration command detailed in the section above, you should be presented with a simple configuration file in the /etc/influxdb folder. Open your file and verify that everything is correct.

Head over to the [http] section of your configuration and make sure that it is enabled.

Verify that the bind address is set to 8086 by default. This is the port that you are going to use to send some commands to your InfluxDB database, like creating a database or adding a user for example.

By default, your configuration file should have the paths that we created in the first section, so you don’t have to change anything. However, you should check that your paths are correct.

Running the InfluxDB container on Docker

First, make sure that nothing is running on the port 8086.

To find the InfluxDB user ID, head over to the passwd file on your host and run

Note: the user ID will surely be different on your system, and you should modify it accordingly when running the docker command.

To start InfluxDB on Docker, run the following command.

In order to test if your InfluxDB container is correctly running, you can check that the HTTP API is correctly enabled.

You can also check that your InfluxDB server is correctly listening on port 8086 on your host.

Awesome! Your InfluxDB container is correctly running on Docker.

By default, your InfluxDB server does not contain any databases except for the _internal used, as its name describes, internal metrics about InfluxDB itself. However, if you created initialization scripts for your InfluxDB

database, make sure that your databases and retention policies are correctly assigned.

Enabling authentication on InfluxDB for Docker

In order to enable authentication for InfluxDB 1.7.x, you are going to create an administrator account for your InfluxDB database (if you didn’t use initialization scripts)

You don’t have to create an administrator account if you initialized your InfluxDB image with environment variables in the previous sections.

This is only necessary is you choose a fully customized InfluxDB image that you configure yourself.

To create an administrator account, connect to a bash process in your container and run the influx utility by yourself.

To achieve that, run the following commands

Identify the container ID of your InfluxDB container, and run the following command to have a bash in your container:

As a reminder, the docker exec is used in order to run a command in a running container.

Here are the options specified with it:

Right now, you should have a shell prompt, similar to this:

In your container, run the influx utility to create your administrator account.

Now that you have an administrator account, you can enable the HTTP authentication for your database.

To achieve that, exit your container, and head to the configuration folder you created for InfluxDB.

Ctrl + D (to exit your container)

Save your file and restart your container for the changes to be applied.

To make sure that your changes are effective, try querying the HTTP API again.

You should be unable to execute a query without specifying the correct credentials.

With this curl command, we made sure that our credentials were correctly set up for our InfluxDB server.

Now that your time series database is up and running, it is time to install our metrics collection agent: Telegraf.