MQTT vs Kafka: An IoT Advocate’s Perspective (Part 3 - A Match Made in Heaven)

So here we are…the final chapter. In Part 2 of this series, we started to drill down into some of the concepts that make Kafka great. We concluded that although terminology between MQTT and Kafka was similar (for example topics), they behaved quite differently under the hood. We also took a brief overview of Kafka Connect and how we can use some of the enterprise connectors to stream our data to other platforms.

Yet we did learn that Kafka does have some shortfalls:

In comes MQTT to the rescue!

As promised in this final blog post, we will look to create a full hybrid architecture between MQTT, Kafka, and InfluxDB.

Before we begin, here is a little housekeeping:

So here is my plan: 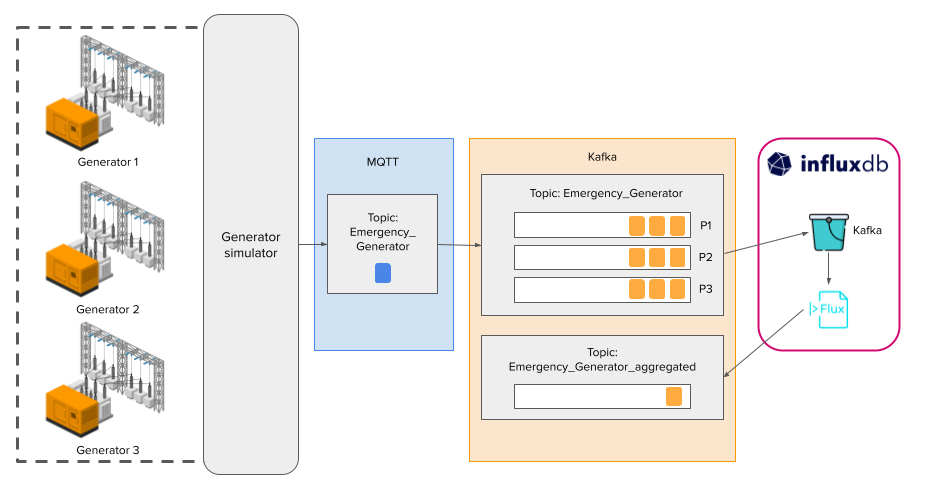 In this architecture, we are going to:

Quite a lot to do, but who doesn’t love a challenge! Let’s get cracking.

So I have made some cool changes to the Generator Simulator after InfluxDB Roadshow:

You can find the repository for Part 3 here.

Now for the big change…we have removed our Mosquitto broker from the architecture. I know what you are thinking. Where in the world are you connecting your MQTT clients? Let me introduce you to the MQTT Proxy.

So what exactly is the MQTT proxy? I must admit the documentation is a little sparse (it took me about an hour of playing around to understand exactly how it was working). So I thought it would be fun to explain how I thought it worked vs. how it actually works.

How I thought it worked 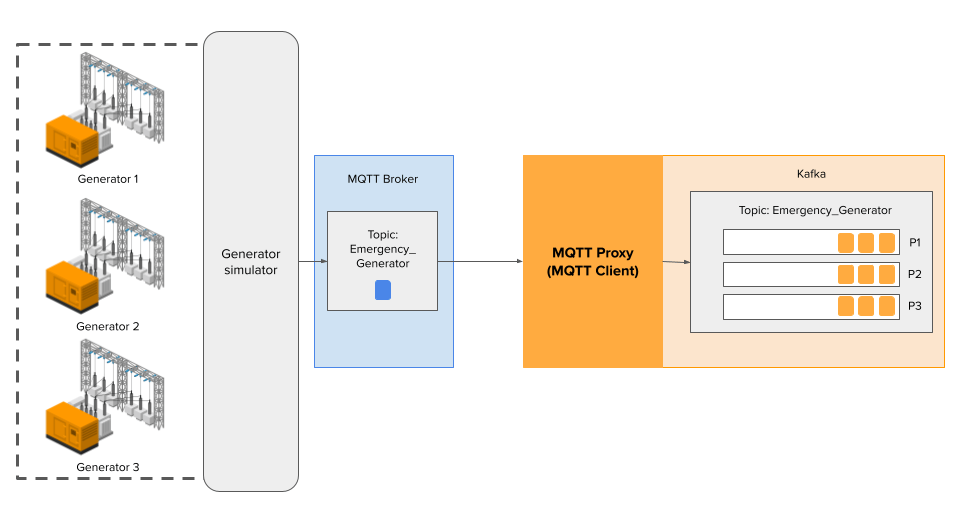 How it actually works 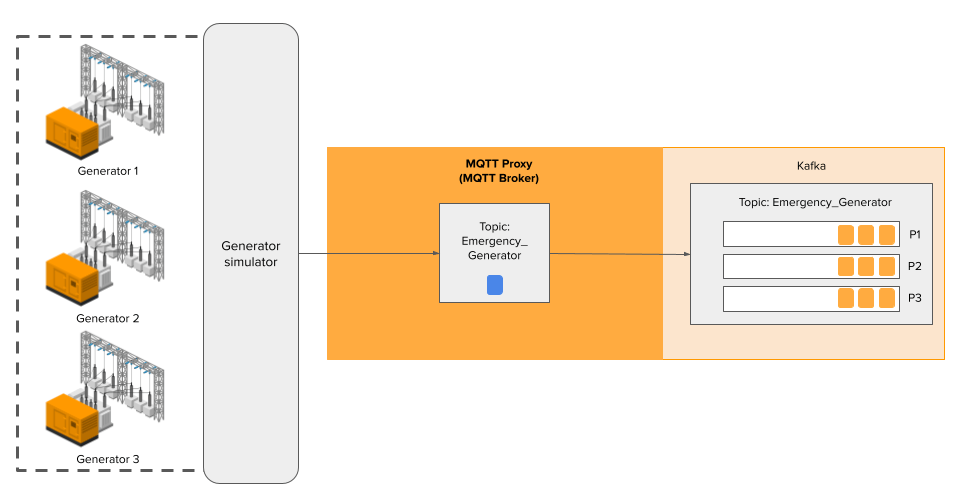 Pretty cool, right? So I thought the MQTT Proxy was essentially a secret MQTT client which would connect to your current broker. You would then specify the topics you wanted to pull from, then some black magic would happen to map the payload to a Kafka topic. But in fact, the MQTT proxy is essentially a secret MQTT broker with Kafka functionality bolted on. This allows our MQTT clients to directly connect to it.

Now that we have a little background, let’s talk configuration. In my infinite wisdom, I decided to set this architecture up with Docker containers. If I could have gone back, I would have just installed Confluent Kafka locally and been done with it. Through a silver lining, I can now share my configuration with you!

So to explain a little, my Kafka cluster is still being hosted and maintained in Confluent Cloud. I am running this docker-compose locally on my laptop. So essentially we have a hybrid architecture with edge-to-cloud communication via the MQTT-Proxy. Let’s break down the docker-compose file:

generators: This is our generator simulator, I won’t spend any time on this. The environment variables allow you to pick the broker you want the MQTT clients to connect to and the number of generators to spin up.

Kafka-mqtt-proxy: So if you are familiar with Kafka configuration, you know that you normally have to define properties file like this:

This is slightly abstracted when dealing with Confluent Kafka containers. Instead, we have to define them as environment variables. I will link the documentation here. The rule of thumb:

So we have the first phase of our IoT data pipeline architecture up and running. Now we can start getting a little more creative with how we work with our data. Let’s drill down one layer from our original diagram and see what we are trying to achieve:

So within this architecture, InfluxDB has evolved to become a little bit more than just a data store. Here is the data journey:

This part is pretty straightforward

Now we can work on enriching our data:

Finally, let’s stream this data back into a Kafka topic:

So although not visually pleasing, here are the results: 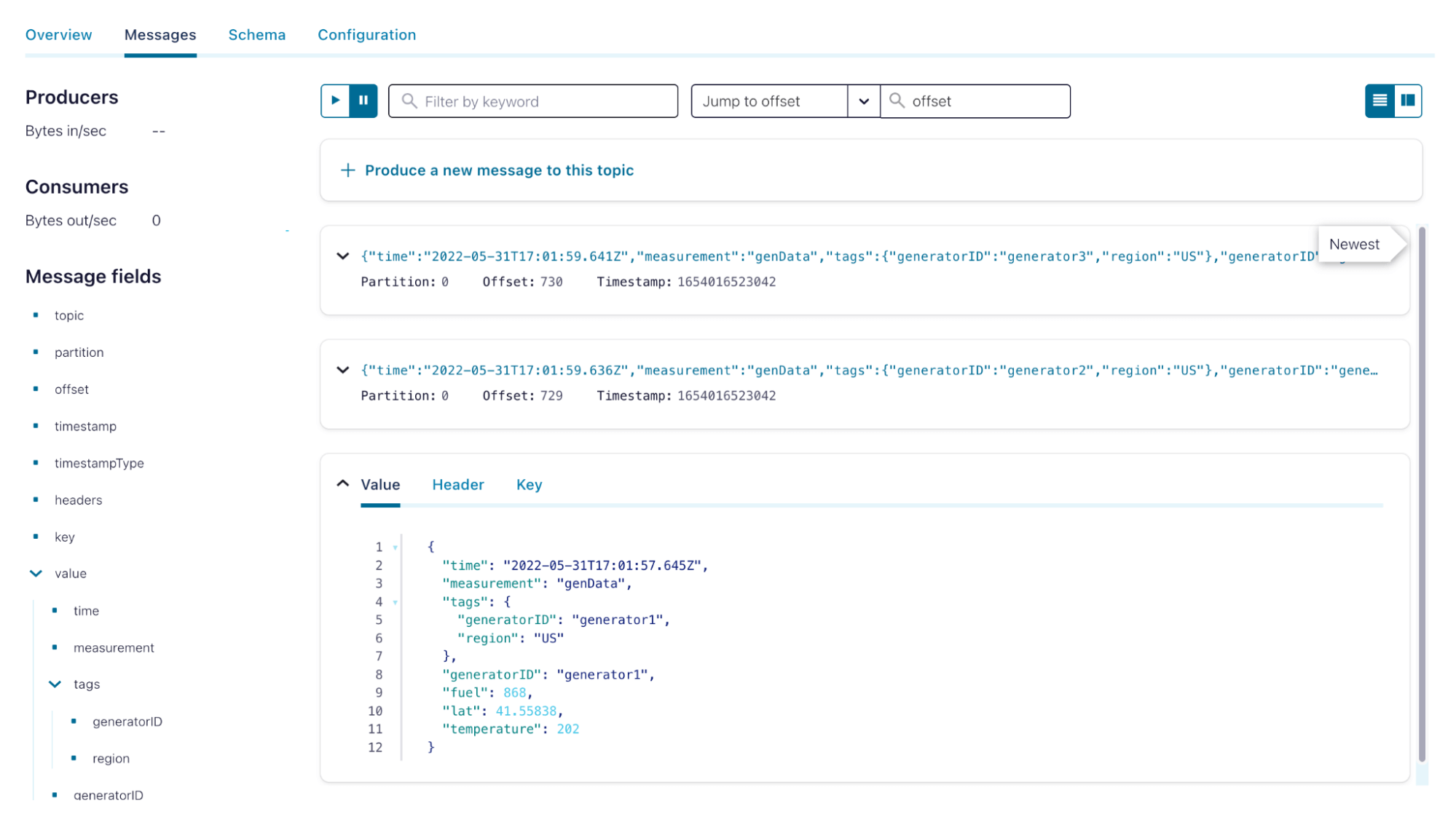 I thought the implications of this were extremely interesting:

So we did it! We have reached the end of our three-part series on MQTT Vs Kafka. Working on this blog series has taught me a lot! The first big revelation was that the title should be changed: MQTT Vs Kafka -> MQTT & Kafka: A Hybrid Architecture for IoT. In all seriousness, let’s take a summary:

We have now built an architecture which maintains the benefits MQTT provides to an IoT architecture (lightweight, built for poor connectivity and effective handling of thousands of connections). We then complimented MQTT with Kafka promoting; high availability, high throughput and enterprise-level connectors. Lastly, we showed how InfluxDB could be included to enhance our IoT data pipeline by providing; extended storage & data transformation capabilities.

So I hope you enjoyed this series as much as I did writing it. I am a strong believer in that the only way to learn something new is by having a go! The theory will only get you so far. I also wanted to share this little insight from the community which I thought was really awesome. There is a company called WaterStream which is providing further integration between Kafka and MQTT. They made this super cool demo which is worth a look!

So until next time, have a go! Download the code from our Community Repo and let me know your thoughts. Who knows? Maybe we might be able to spin up a Part 4 community edition with enough feedback.

Something to think about…

Within the above example, we relied heavily on Kafka infrastructure to get our data around. Critically Kafka provided a feasible way for us to get our data from Edge to Cloud. In some circumstances, we might not be this lucky. So let’s take a look at an alternative architecture: 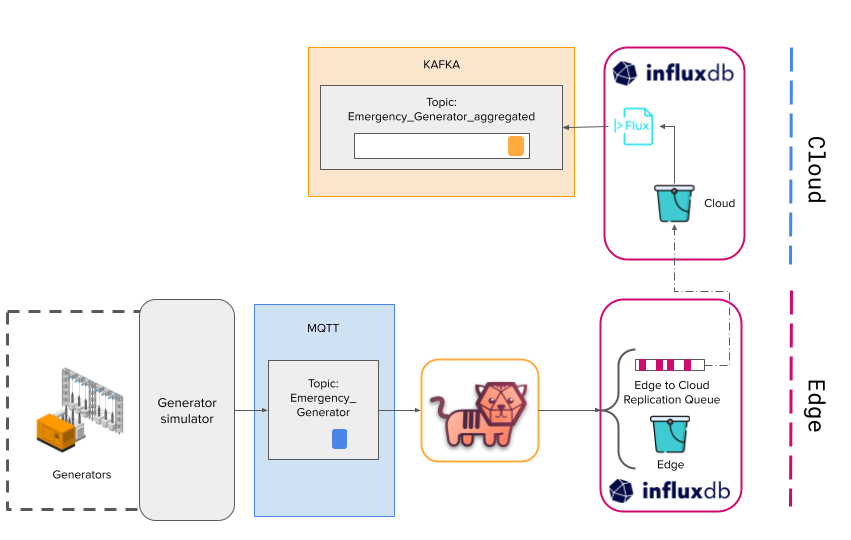 The above architecture is made possible by a new InfluxDB feature called Edge Data Replication. This allows us to write data from our generators to a locally hosted InfluxDB before being automatically transferred to InfluxDB Cloud. This is great for use cases where:

We can still retain our Kafka solution hosted in the cloud for the rest of our architecture, but this allows InfluxDB to provide the backbone in data transfer from edge to cloud.