In Part 1 of this series, we started to compare the uses of Kafka and MQTT within an IoT infrastructure. It was concluded that in a basic publish-and-subscribe model of an IoT device, Kafka might simply be overkill. However, we also learned that Kafka has some valuable features we would like to utilize within an IoT architecture:

In this post, I want to focus on redesigning our last demo to make use of some core Kafka features that we overlooked (topic design and partitioning), as well as introduce new topics (pun intended) like third party integrations.

Before we begin here is a little housekeeping:

Within our original demo, our topic structure looked like this: 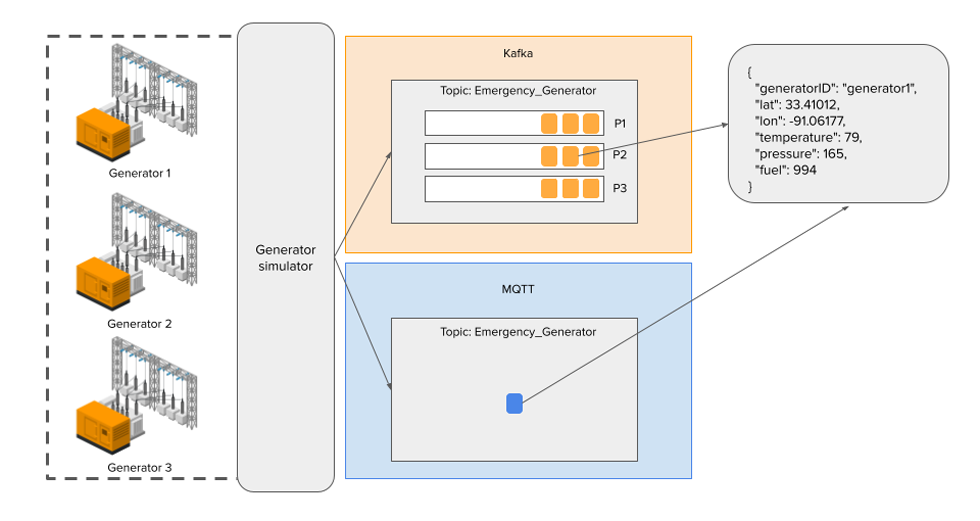 Essentially no matter how many Emergency Generators we spun up, our payloads were all handled by the same topic. Under a finite number of generators, this is reasonable. However, this does leave us with a few clear issues:

So what could we do differently?

So within MQTT, we can establish a topic hierarchy. The team at HiveMQ wrote a great blog post outlining some of the do’s and don’ts when building out topics:

So let’s deploy some of this logic to our application. Currently, our payload looks like this:

Our topic is as follows:

Since we have the generatorID available within the payload, we can look to append this as a new topic layer:

This gives us our emergency_generator topic and the subsequent layers underneath:

Using this hierarchy structure provides the added benefit of natural division between devices (in our case generators). Can we achieve a similar architecture to Kafka? Are there added benefits?

Kafka has a pretty simple and powerful way of naturally segregating our data streams. Let’s take a look at this section of code again:

As part of our data publish, we assign a key. This key is assigned to our data as a key-value pair. Although this key is optional, it is extremely powerful when combined with partitions. We will get to this in a second, but let’s first update our key to use our generatorID instead.

Now for the interesting part, we said in Part 1of this blog series that Kafka deploys some unique features for processing vast quantities of data in an efficient way. This is where partitions come in. You can imagine partitions like a simple queue for records (our data). Partitions have the benefit of providing consistent ordering of records and parallelism for performance purposes, but how? This is where our key comes in. A great way to imagine this is an airport immigration queue, and your passport is the key. There is usually a queue (partition) for country nationals, fast-track such as European passports and all passports. All passport holders will enter their respective queues for processing. This is equivalent to our Kafka architecture Generator1 records will always enter for example partition 1 and Generator2 partition 2. Although there is not usually a 1-to-1 relationship between keys and partitions, there are some great benefits as we scale. They include:

As you can see we are starting to utilize some of the powerful features which set Kafka apart from other pub-sub messaging protocols.

What else can Kafka do?

Apache Kafka is an enterprise messaging protocol that understands it needs to fit within a pre-existing ecosystem to be effective. This is where Kafka Connect comes in.

Kafka Connect provides a catalog of powerful premade connectors for well-known enterprise systems and data storage engines like InfluxDB. So since I am biased let’s discuss sources and sinks using the InfluxDB plugin.

We are going to park the InfluxDB source for now (spoiler alert I am going to use this within part 3 of the blog series). Let’s set up an InfluxDB sync:

Note: For ease of demoing I am using Confluent Cloud: https://confluent.cloud/

The breakdown is as follows:

You should now be able to deploy the connector. We can then view the data flow within the stream lineage.

InfluxDB is one of many connectors that Kafka Connect has. Our JSON payload is relatively simple meaning it translates directly to a lot of connectors that accept JSON payload structures. However, Kafka can also apply simple transformations to data payloads for on the fly conversion helping to improve interoperability.

We have now delved a little deeper into the deployment architectures of both MQTT and Kafka. Although MQTT and Kafka both use Topics to describe containers for message payloads, we now see under the hood they are quite different. From my perspective, I can now see the performance implications of using Kafka partitions and record keys. We have also explored the ability to use enterprise-grade connectors offered by InfluxDB. All of this in mind this still does not outweigh some of the shortfalls of a Kafka only IoT solution:

Places where MQTT excel. So what next?

Join me for the final blog in this series, where we combine what we have learned to create a truly hybrid IoT architecture using a real IoT use case. We will learn about Kafka’s MQTT proxy and further explore Kafka’s enterprise connectors such as InfluxDB source.