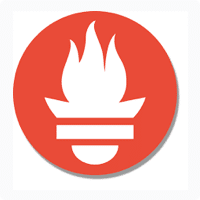 Prometheus is an open source systems monitoring and alerting toolkit originally built at SoundCloud by ex-Googlers who wanted to monitor metrics on their servers and applications. Prometheus joined the Cloud Native Computing Foundation in 2016 as the second hosted project, after Kubernetes. Prometheus is an open source offering that is provided independently from any company and is very popular as the monitoring solution for Kubernetes metrics. Prometheus, like InfluxDB, is written in Go.

How does Prometheus Work as a Monitoring Solution?

For Kubernetes environments, the service discovery is well-integrated and Prometheus will poll the metrics endpoints and gather the metrics into the Prometheus Server for monitoring and alerting. The pull approach is nice because it does not require the installation of an agent to collect the metrics, although you still need to deploy “exporters” to expose the metrics from the system you are collecting metrics from. 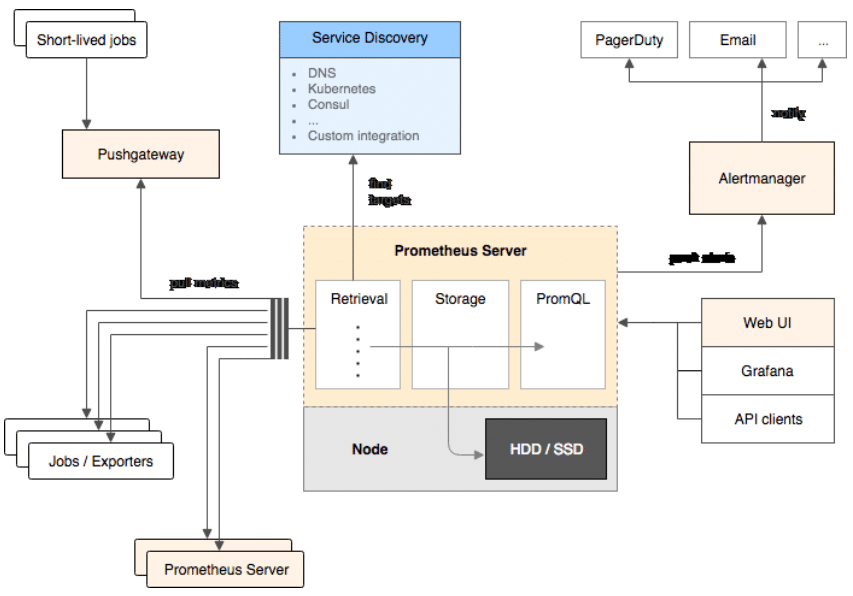 Push vs. Pull Based Metric Collection and Monitoring

In the pull-based method, the monitoring agent polls the targets being monitored periodically and alerts based on that data. In the push method, telemetry and metrics are pushed to the monitoring agent (or more frequently a time series database), and monitoring is done either through the agent or other processes querying the database. When instrumenting your own application code, there is a choice to be made between push and pull. Either you send metrics out to another service via a client library, or you make them available to others through some network addressable target (like an HTTP API, for example).

The primary disadvantage of pull-based methods is that they don’t work well for event-driven time series (like individual requests to an API, or events in your infrastructure). Another disadvantage is that all metric endpoints have to be reachable from the server, implying a more elaborate secure network configuration. This can also become an issue for large-scale deployments, or where clustering is required for high availability.

For Kubernetes only, monitoring pull-based metrics collection might be just fine, but for distributed environments, especially in IoT architectures, push-based monitoring is preferable. In most environments, there is usually the need to monitor and alert on both metrics (regular time intervals) and events (irregular time intervals), and it becomes preferable to support both push and pull. This is currently a limitation of Prometheus, but this is where InfluxData’s Telegraf and Kapacitor can be used to enhance the Prometheus environment.

All the metrics generated following the Prometheus standard can be read by Kapacitor. This means that any service discovery target that works with Prometheus will work with Kapacitor. In addition, with InfluxDB’s native support for the Prometheus remote read and write protocol, Prometheus can be used as the collector and have InfluxDB be its long-term, highly available, scalable data store.

Using Kapacitor to monitor Prometheus scrape targets allows for further streaming analytics, advanced anomaly detection or the ability to add custom logic that gets triggered on the streaming data before it is even stored in the underlying data store.

One of the core values and primary design objectives of Prometheus is simplicity. To achieve this, Prometheus focuses on a single-node architecture and enhances the server to achieve more and more performance in this single-node infrastructure. Prometheus doesn’t have clustering in their roadmap probably because of the additional complexity this would create, and this is against their design objective of simplicity.

Using Prometheus for monitoring is a good choice in Kubernetes environments where pull-based monitoring and alerting of metrics are required. For environments that require monitoring or alerting of both metrics and events or where high availability is a requirement, then consider augmenting your architecture to include InfluxData’s InfluxDB Enterprise or InfluxDB and Kapacitor. InfluxData will continue to enhance the support for Prometheus going forward. To keep abreast of the latest developments, please follow the project on GitHub.