Catching Up with Chronograf

Chronograf 1.3.9.0 is now available for download, and it provides a number of new features including an editor for TICKscript, support for the fill() functions, the ability to download queries as CSV files, and support for multiple data sources per dashboard. Now that Chronograf is almost a year old, let’s catch up on some of the features you might have missedbefore we dig into the latest innovations.

(though work on it started a bit earlier) and the first official beta release was December 6th. The goal of the project was to create a visual interface for the TICK Stack as well as to provide a solution for general DevOps problems. With this in mind, the initial beta of Chronograf consisted of three main components:

Chronograf flipped to 1.2.0-beta-x release numbering along with the rest of the TICK Stack last January. However, during this period Chronograf was in a transitional state, as work had begun on dashboards, but it did not yet have a visual editor for them. Over the next few months we worked towards what would end up being the Chronograf official GA release. The 1.3.0.0 release had full support for customizable dashboards, InfluxDB administration, feature parity with the now deprecated InfluxDB admin UI, and support for features available only within InfluxDB Enterprise.

The next major milestone for Chronograf was its inclusion 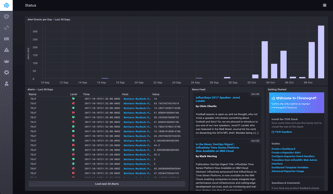 along with Kapacitor as part of InfluxDB Cloud subscriptions. For this milestone we improved the initial landing page, which provides information about Kapacitor alerts as well as a configurable news feed and getting started documentation. We also added auto selection of “group by time”, a number of new OAuth providers, customizable time ranges, security via JWT support with InfluxDB, and a large number of graph customizations.

The 1.3.9.0 release includes some of the most requested features by the community. First is the ability to export query results to CSV files so users can import their data and customize their graphs via Microsoft Excel or Google Sheets. Currently this feature is only available from within the Data Explorer, but it will soon be an option for all cells in a dashboard. The next major feature is the ability to specify the data source for each cell in a dashboard. This allows users to create dashboards that link to more than one instance of InfluxDB, which is useful to compare results from multiple data centers, check production versus development environments, or visualize the data in a single dashboard gathered across separate departments and multiple instances of InfluxDB. Chronograf now also supports InfluxDB fill() functions and continues to move closer to full support of all InfluxQL functionality.

Perhaps the biggest feature introduced in this release of 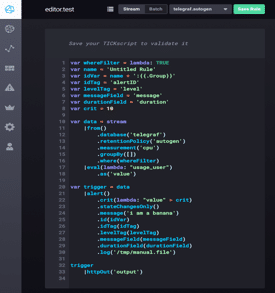 Chronograf is the TICKscript editor. Previously, Chronograf provided a “wizard-based” approach for users that created basic TICKscripts that checked a metric against a particular threshold, against a relative change in value, or if the metric had stopped reporting stats (aka deadman alert). This was a great way for users to explore the basic functionality of Kapacitor, but it also meant that they would have to manage TICKscripts in multiple places and load them into Kapacitor via the Kapacitor CLI, API or through Chronograf. Now all TICKscripts are viewable and editable directly from within Chronograf. This feature also allows users to manage both batch and stream processing scripts in the UI. With this initial release of the TICKscript editor, users can get started with basic scripts using the visual rule builder and then expand on that functionality with access to all the features that Kapacitor has to offer.

So what is coming up for Chronograf? To complement the TICKscript editor, access to log information via the log API in Kapacitor 1.4.0 will be integrated into the overall experience. This has been a much-requested feature from our InfluxDB Cloud customers and will further streamline the development process for TICKscript. Over the next few 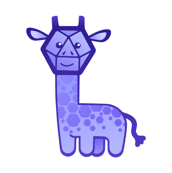 releases, we also intend to roll out time-based comparison allowing users to compare things like month-over-month performance of a given query, sub-second drill down and basic graph annotation support. We then plan to turn our full attention to our 1.4.0.0 release, planned for later this quarter, which will support user-level permissions and organizations. Also within the 1.4.0.x line, we are looking at building a new user experience which supports visualization for OpenTracing data, which we recently added to Telegraf.

If you have any thoughts on these features, suggestions for additional ones, or have bug reports, we are always happy to hear from our users on GitHub or answer any questions you have on our community portal.