Figuring out the best data layout for InfluxDB v2 is important in optimizing the resources used by InfluxDB, as well as improving ingestion rates and the performance of queries and tasks. You also want to consider developer and user experience (UX). This post will walk you through developing a schema for an IoT application example and answer the following questions:

Generally, you should abide by the following recommendations:

This section introduces InfluxDB concepts that impact the resources required to run your InfluxDB instance. We’ll learn about: 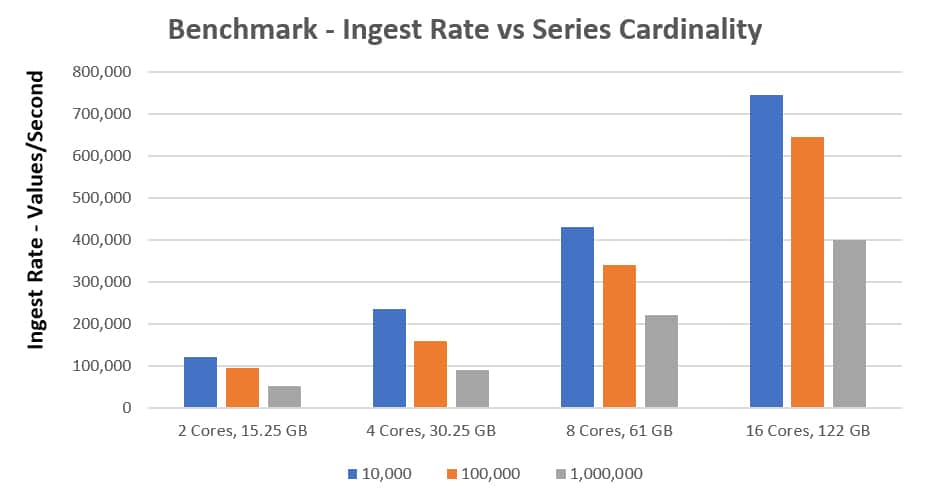 Benchmark of the type of Ingest Rate that InfluxDB supports

In the above graph, the blue, orange, and grey lines represent different series cardinalities. For example, if you’re running InfluxDB on a r4.4xl instance with a series cardinality of 10,000 you can ingest over 700,000 points per second.

Let’s assume that we have two users and several types of plant_species:

We have 1 bucket, 1 measurement, and 4 field keys.

Our series cardinality would be equal to:

For example, imagine if I added some user metrics to the MyPlantFriend measurement, like device ids and email addresses. This information shouldn’t be written to the database everytime we write a new environment metric. Writing the same email address every time a temperature metric is written is redundant. In fact, we probably only want to write that data once, upon user registration. Therefore it makes sense to write this user data to a different bucket. However, this example is specific to the MyPlantFriend IoT application where we are assuming that fields are unrelated to each other. Please read the section “Final considerations for InfluxDB Schema design” to understand how UX affects schema design.

Similarly to how we differentiated our data into different buckets to apply separate retention policies, we must also think about how we want to downsample our data. Downsampling is the process of using a task to aggregate your data from its high precision form into a lower precision form. For example, downsampling tasks for MyPlantFriend might look like:

Used in combination with retention policies, downsampling  allows you to reduce InfluxDB’s instance size because queries against downsampled data scan, process, and transfer less data. You should perform downsampling whenever you can afford to lose high precision data or when your queries can be exactly answered with downsampled aggregates. Employ retention policies to drop your old high precision data. This will save you on storage and increase query performance.

Optimizing your schema for resource usage

Understanding when to apply downsampling is fairly straightforward, however optimizing your InfluxDB schema to increase your downsampling task performance and reduce your resource usage isn’t trivial. Thinking more deeply about downsampling directs us towards a new schema design. Remember that buckets, measurements, and tags are indexed while field values are not. Therefore queries and tasks that filter by buckets, measurements, and tags are more performant than those that filter for fields. Since we foresee downsampling the MyPlantFriend fields (air_temp, soil_moisture, humidity, and light  across) at different rates, splitting the fields across measurements offers the following advantages:

Thinking about the influence that series cardinality, data ingest rate, and query performance has on instance size is only part of a well thought out data schema design. You also want to think about how your users and developers interact with your time series data to optimize your InfluxDB schema for developer experience.

The MyPlantFriend fields aren’t really related to each other. I don’t foresee the user needing to compare fields with each other or perform math across the fields. This supports the proposition to separate the fields out into measurements. Let’s contrast the MyPlantFriend UX with the UX of a human health app to highlight how UX influences schema design. Humans have a standard set of biological health indicators. For a human health app I would write blood oxygen level, heart rate, and body temperature in one measurement because I foresee needing to compare a combination of the metrics to assess human health. While you could separate out the fields into different measurements for a human health app, you’d most likely have to use joins() to perform math across measurements or buckets which are more computationally expensive.

By contrast, separating out the fields for the MyPlantFriend app into different measurements is a good strategy because joins() will most likely not be used or used sparingly. This schema change for the MyPlantFriend will allow developers to write queries easily and provide the users with the data they’re interested in.

Additionally, if you’re creating an app and using the API, you want to address security and authorization concerns by writing data associated with each user to a separate bucket. InfluxDB authentication tokens ensure secure interaction between users and data. A token belongs to an organization and identifies InfluxDB permissions within the organization. You can scope tokens to individual buckets.

After taking runaway cardinality, downsampling and retention policies, and query performance optimization into consideration, I propose the following schema design:

Remember, the final schema results from taking the following assumptions specific to the MyPlantFriend IoT Application into consideration:

Mistake 1: Log messages as tags. Solution 1: We don’t advise that anyone store logs as tags due to the potential for unbounded cardinality (e.g. logs likely contain unique timestamps, UUIDs, etc). You can store attributes of a log as a tag, as long as the cardinality isn’t unbounded. For example, you could extract the log level (error, info, debug) or some key fields from the log message. Storing logs as a field is ok, but it is less efficient to search (essentially table scans), compared to other solutions.

Mistake 2: Too many measurements.  This typically happens when people are moving from or think of InfluxDB as a key-value store. So for example, if you’re writing system stats to an InfluxDB instance you might be inclined to write data like so: Cpu.server-5.us-west.usage_user value=20.0 Solution 2: Instead encode that information as tags like so: cpu, host=server-5, region = us-west, usage_user=20.0

Mistake 3: Making ids (such as eventid, orderid, or userid) a tag. This is another example that can cause unbounded cardinality if the tag values aren’t scoped. Solution 3: Instead, make these metrics a field.

I hope this tutorial helps you understand how to best design your InfluxDB schema.  As always, if you run into hurdles, please share them on our community site or Slack channel. We’d love to get your feedback and help you with any problems you run into.