After trying to explain InfluxDB to family between hors d’oeuvres, I quickly realized I could not simply dive into Flux. I needed to show, not tell.

Over two blogs, I’ll dig into how I explained InfluxData for non-technical folks, a serverless example, and deep dive into serverless Flux code so you can wow your own in-laws.

This Thanksgiving, much of our family was in town to visit and fill up on turkey and ribs.  Everyone was curious about InfluxData, but conveying InfluxDB to anyone not working in technology is no small feat.

While a serverless time series database platform might roll off the tongue, I would be more successful describing the weather in Basque than expecting anyone who does not use databases to comprehend techno-marketing-speak. I tried different ways to share InfluxDB with my family and friends, and by Sunday, I settled on:

“Folks measure almost everything constantly now, like ocean tides, house temperatures, or internet speeds. They’re measuring so much, so often that they have found they need specialized time-based collection and analysis tools. InfluxDB is an open source software project to capture and analyze this massive amount of data. InfluxData’s newest iteration includes all the tools already built to help handle this huge time-based measurement load, and now we’ve added support for running serverless code. The platform does the heavy lifting of collecting data, storing it, and providing computing power to analyze the data so software builders can focus on implementing solutions.”

This elicited a few head nods, but I could tell it was still fuzzy. Not to be deterred, I retreated to my desk to create a concrete Flux example. I settled on a use case I thought most folks could relate to  how long it takes to load your favorite website.

I started by tinkering with the Flux REPL and proceeded to my InfluxDB Cloud script builder.  I ran into a few snags, but after a couple of workarounds (covered in the deep dive), I managed to distill the data into a suitable dataset.

With my Flux program generating and saving a proper dataset every time it was invoked, I put InfluxDB Cloud’s serverless capabilities to work. By saving the script as a task running every minute, my data started to flow in. From there, it was a simple matter to create and share a dashboard: 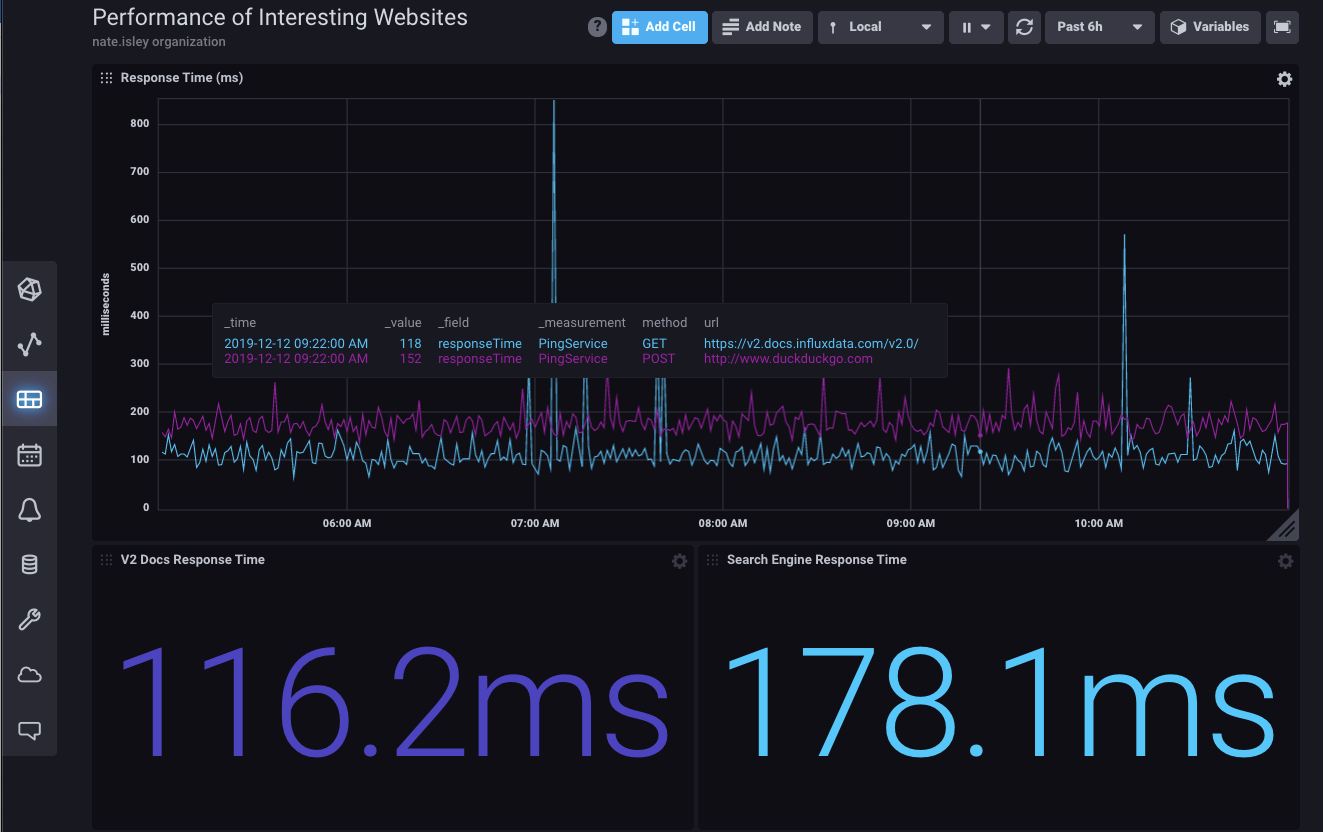 A concrete example did the trick and a lightbulb turned on in my brother’s head  “Ah, I can gather and process any information over time with a few lines of Flux.”

Unlock Flux's power for your use case!

Flux is a powerful language for working with data and it’s available now on top of our time series platform. It is unlocking exciting new time series use cases and allowing developers to work with data where it resides both within InfluxDB and other data sources such as mySQL, MariaDB, and Postgres. Pick up InfluxDB’s OSS or sign up for InfluxDB Cloud to start exploring. If you are looking for a starting point for Flux, I highly recommend Scott Anderson’s outstanding Flux training.

As always, if you have questions or feature requests for Flux, head on over to Flux’s community forum or join us in Slack!