How does InfluxDB work with Azure and other Microsoft technologies?

InfluxDB integrates with a broad range of technologies related to Azure and Microsoft more broadly; here’s a visual representation. Microsoft-related technologies are in gray, while InfluxDB components are in purple. 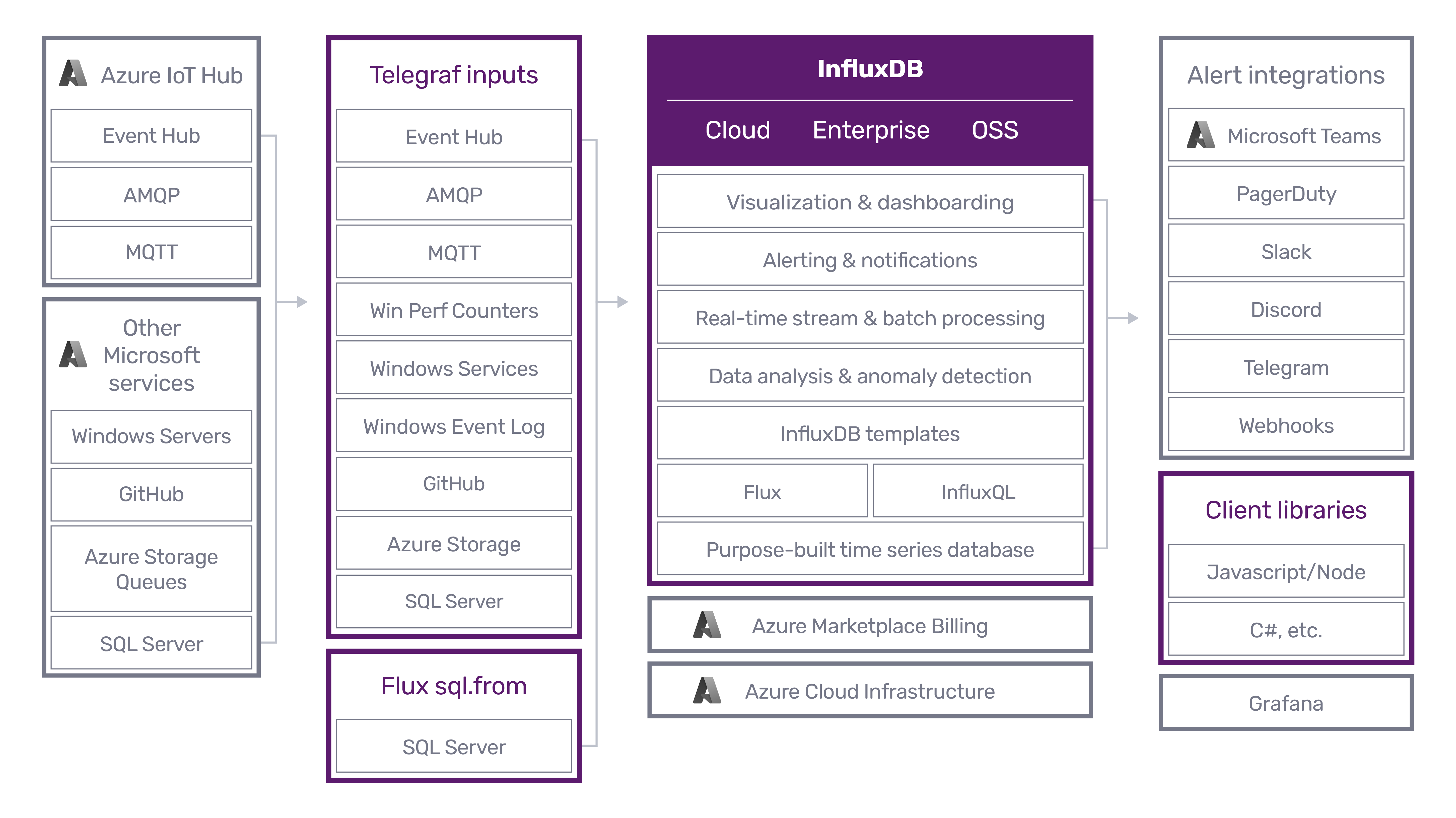 Let’s dive deeper into each of these integration points.

To accumulate time series data, Telegraf, our open source data collection agent, has the following input plugins for Azure and other Microsoft technologies:

To analyze your time series data, you have the full power of InfluxDB  visualization, dashboarding, data processing, anomaly detection, and alerting  all running on Azure Cloud and billed using Azure Marketplace.

We provide the following InfluxDB Templates via our template gallery that let you quickly set up monitoring datasources (Telegraf configurations) and dashboards:

InfluxDB Templates are an incredible time saver. In just one minute, they let you import a Telegraf configuration and dashboard that you can easily customize so you don’t have to spend hours building from scratch. For instance, here’s a snippet of the dashboard that comes with the SQL Server template that contains over two dozen query and associated charts: 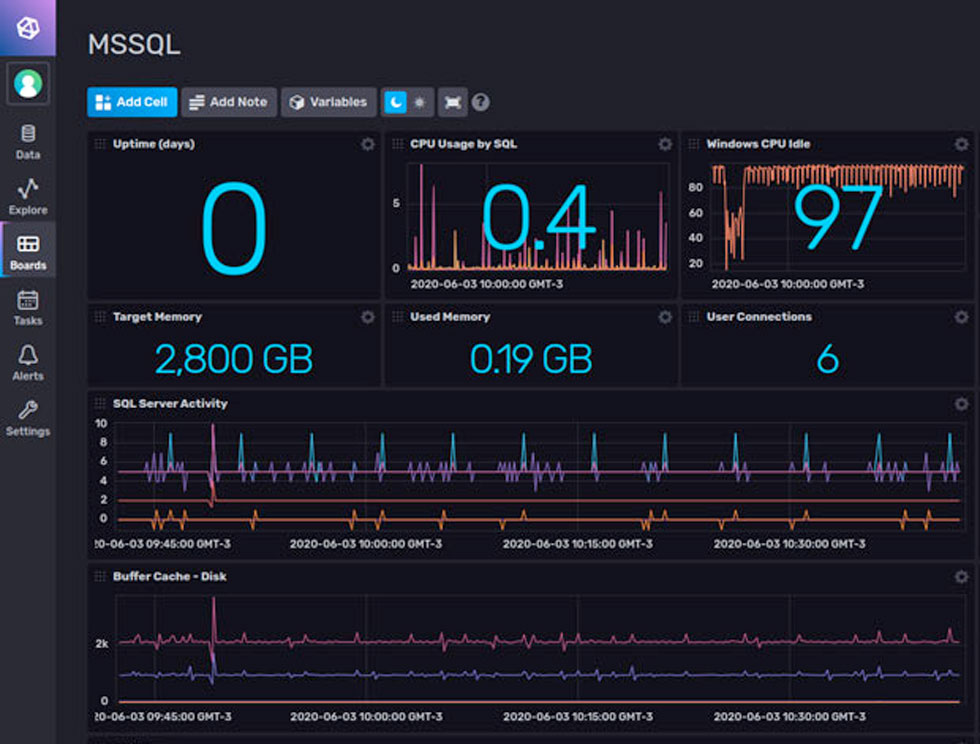 As part of this launch, we have also added a Microsoft SSO login option to InfluxDB Cloud. This allows InfluxDB Cloud users to login with their Azure Active Directory credentials. 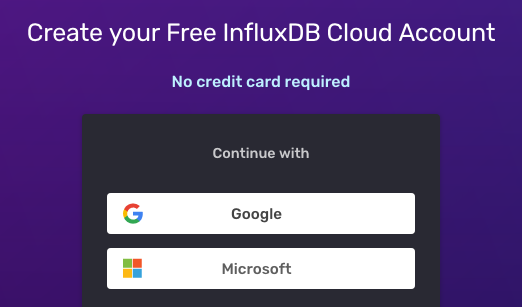 And to act on your time series data, Flux lets you send alerts to Microsoft Teams, as well as other popular endpoints such as PagerDuty, Slack, webhooks, and more. For instance, here’s how to use Flux to post a message to Microsoft Teams:

We also provide a C# client library for InfluxDB.

When you sign up for InfluxDB through Azure Marketplace, you can consolidate your InfluxDB Cloud and Enterprise expenditures across all teams, onto a single Azure bill. Cloud computing is all about eliminating tedious tasks so you can focus on what matters. Doing this provides the following benefits:

Focus on your day job  Without Azure Marketplace billing, your developers and SREs have to put Azure charges on their credit cards and later expense them. That’s one more administrative task to pull them from their work. With our new Marketplace integration, you give them a fast, easy way to spin up the time series database instances they need to be productive. And they don’t need to deal with time-consuming expense reports.

Pain-free reporting  All your InfluxDB charges, for all accounts, appear on your existing Azure bill, so they’re easier to track. For engineering and IT managers, this makes it easier to generate spending reports so they can focus on what matters  delivering projects on time, and keeping critical services running.

Streamlined purchasing  There’s no need to work with your purchasing department to onboard InfluxData as a new vendor or deal with the hassle of setting up a new contract. If you’re already using Azure, then you remain with a single vendor for both your Azure usage and your InfluxDB usage.

Streamlined support  When you’re trying to keep a development project on track, or a critical service running, you know that any downtime can throw a wrench into your plans. When outages occur, the InfluxDB and Microsoft teams work closely to quickly pinpoint the root cause to minimize downtime.

To sum up, we hope that accessing InfluxDB through Azure Marketplace means less stress for you and your team. 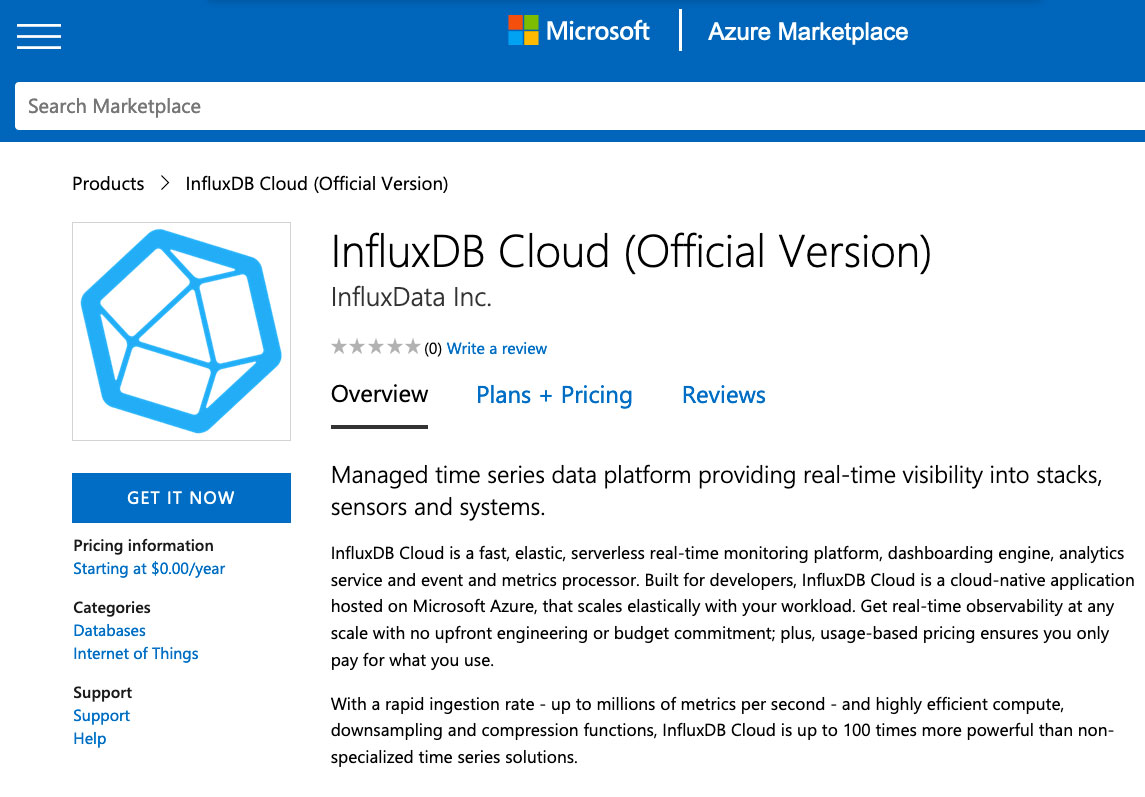 What's the pricing of InfluxDB Cloud on Azure?

Pricing for InfluxDB Cloud on Azure Marketplace is based on usage with no minimum spend. It offers the same, simple low rates available directly through InfluxDB Cloud.

The pricing of InfluxDB Cloud on Azure actually is pretty cool. Here’s why:

With most “cloud” databases, you have to pick the size of the machine you want to run the database on. Pick too small a machine, and your database will fall over. Pick too large, and your budget will take a hit. Migrating your data from one size of machine to another is a time sink. This means you miss many of the advantages of the cloud, specifically cost savings and time efficiency.

InfluxDB Cloud is different. The reason is that, under the hood, InfluxDB Cloud is a multitenant database cluster running on Kubernetes. This lets it dynamically scale to provide whatever ingest, storage, and query capabilities you need, on the fly. It means that you only pay for what you use  specifically, the data you send us, the data you store, and how long your queries run. That’s why we call it usage-based pricing.

So, you are freed from the hassle of trying to pick a big enough machine, the risk of overpaying for a database, and the frustration of having to migrate from one machine to another.

Here’s more on how this pricing gives you complete control over your time series database spend on Azure, as well as how to understand and forecast your charges. 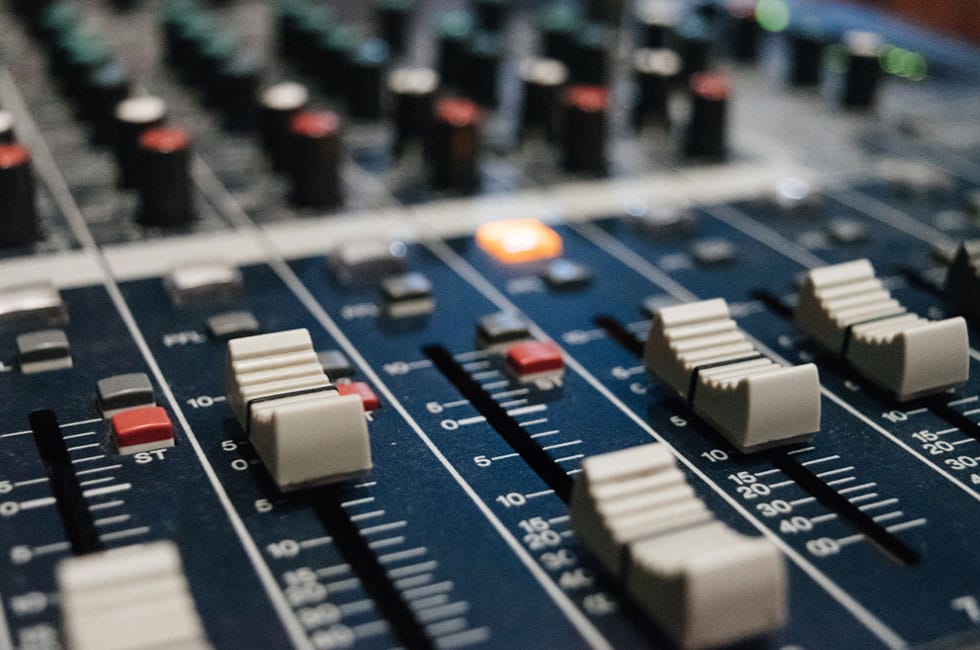 Where does InfluxDB run on Azure?

As of the time of this writing, InfluxDB Cloud currently runs in two Azure locations: West Europe (Amsterdam) and East US (Virginia). Here’s the most current list of InfluxDB Cloud locations.