Does your company use AWS Billing and Cost Management? Now you can put your InfluxDB charges straight onto your AWS bill. This applies to both InfluxDB Cloud and InfluxDB Enterprise on the AWS Marketplace.

Why does AWS Marketplace Billing matter?

You might not realize it, but if you’re an AWS shop, AWS Marketplace Billing is a major time-saver that lets you consolidate all your AWS expenditures, across all groups, onto a single bill. And cloud computing is all about eliminating tedious tasks so you can focus on what matters.

To drill in, AWS Marketplace Billing provides the following benefits:

Simpler administration  Without AWS Marketplace Billing, your developers and SREs have to put AWS charges on their credit cards and later expense them. That’s one more administrative task to pull them from their job. With this integration, you give them an easy way to spin up the cloud resources they need to be productive without dealing with time-consuming expense reports.

Easy tracking  All your InfluxDB charges, for all accounts, appear on your existing AWS bill, so they’re easier to track. For engineering and IT managers, this makes it easier to generate spend reports so they can focus on what matters  delivering projects on time.

Streamlined purchasing  There’s no need to work with your Purchasing department to onboard InfluxData as a new vendor, deal with the hassle of setting up a new contract. If you’re already using AWS then you remain with a single vendor for both your AWS usage and your InfluxDB usage. 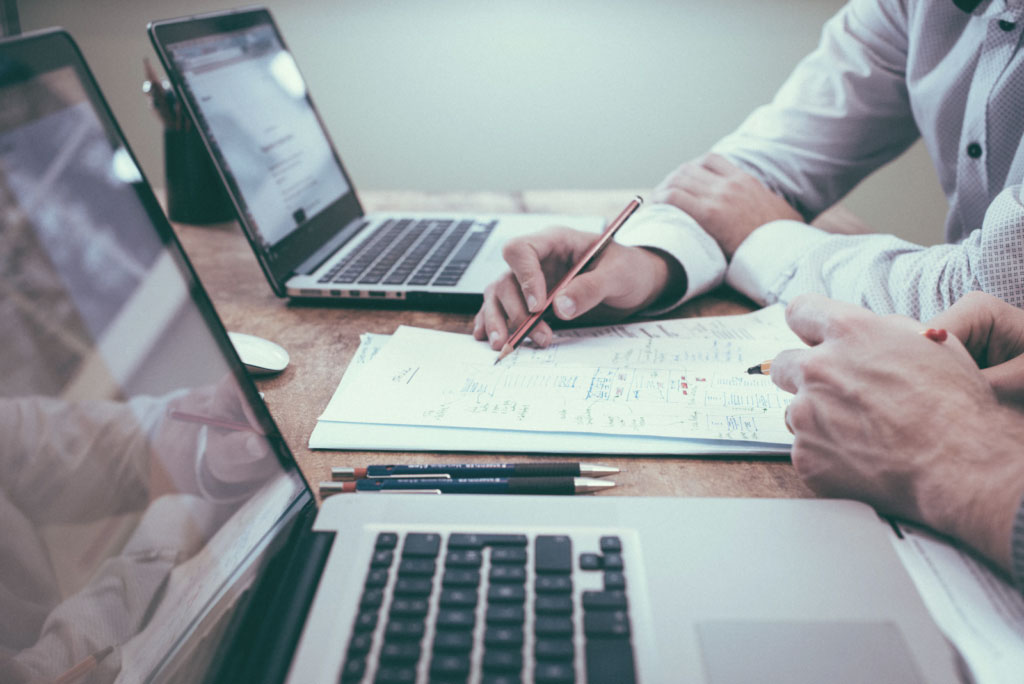 How to use InfluxDB with AWS

So, what can you do with InfluxDB on AWS? Essentially, it boils down to the following:

Monitor your AWS cloud infrastructure  your EC2 instances, your Dynamo and RDS databases, literally anything running on AWS.

Monitor your applications running on AWS  their availability and performance, the transactions they’re performing, and anything else your business depends on.

Monitor your devices and sensors  what telemetry they’re sending, as well as the health of the sensors themselves.

What does that mean, exactly? A lot  let’s walk through all the points of integration available between InfluxDB and AWS: 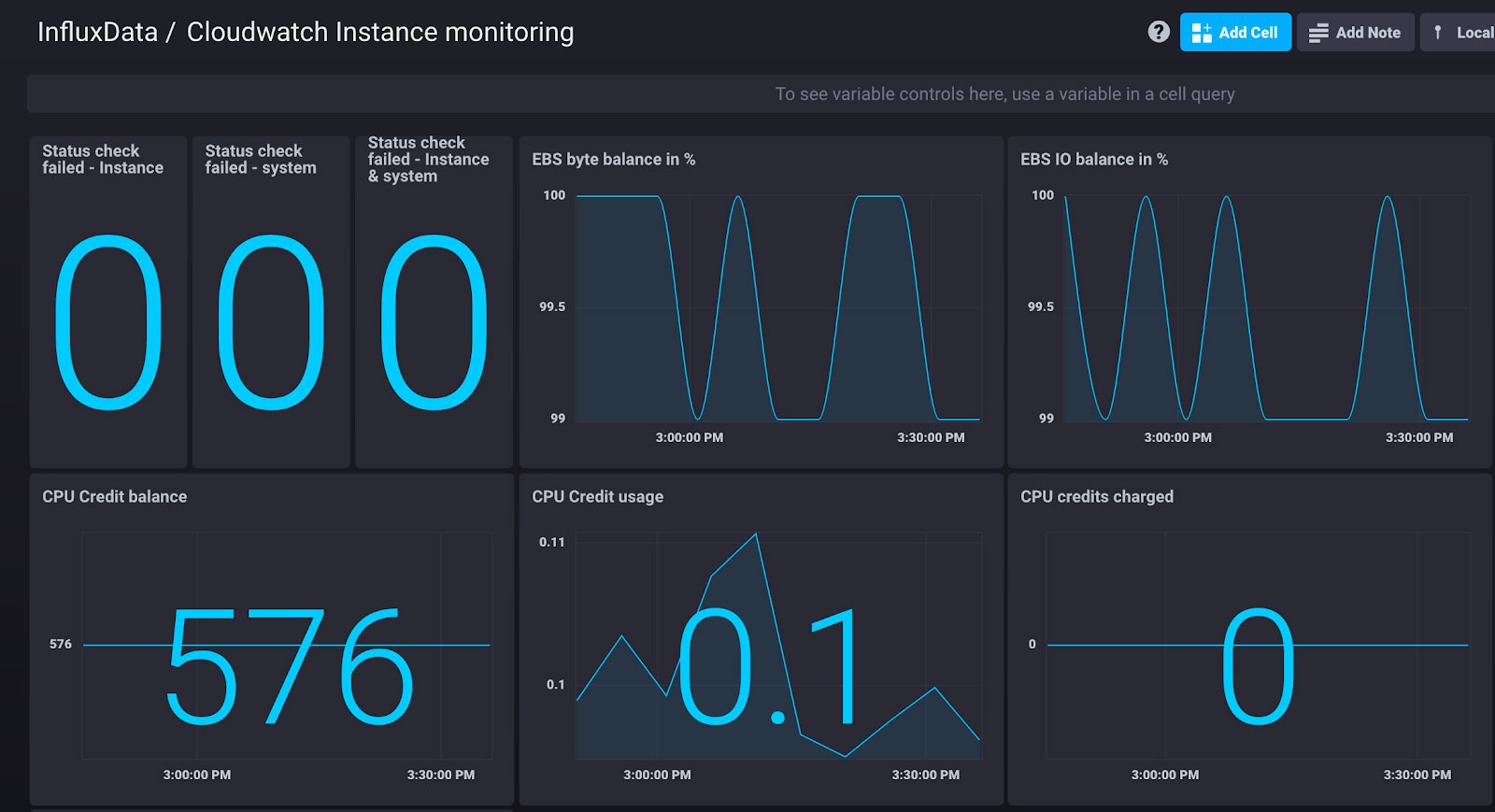 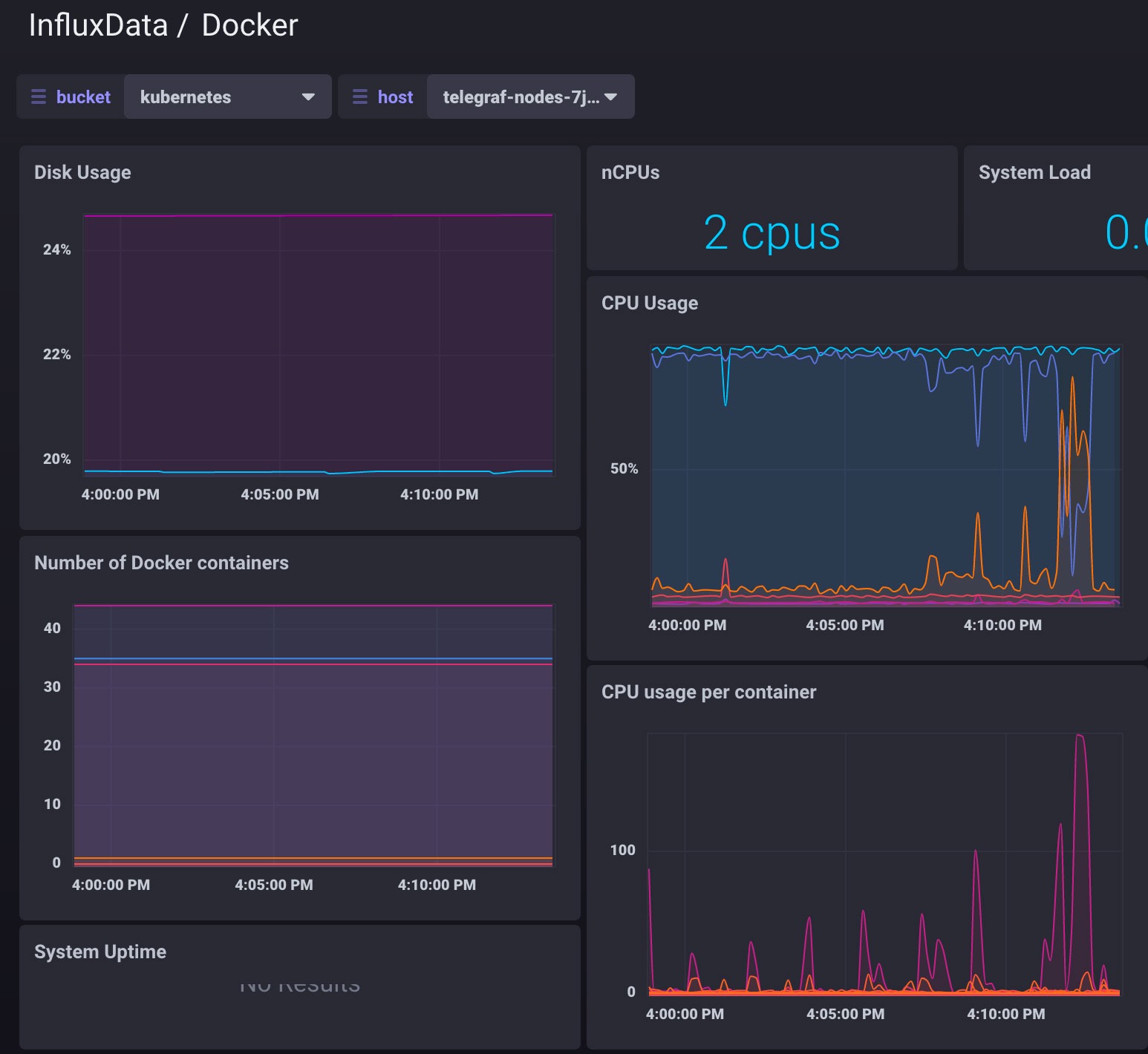 AWS EKS: Inventory the components of your Kubernetes clusters running on AWS, and track the performance of each pod and container, using the Telegraf Kubernetes and Kubernetes Inventory plugins. Here’s a sample dashboard of K8s metrics: 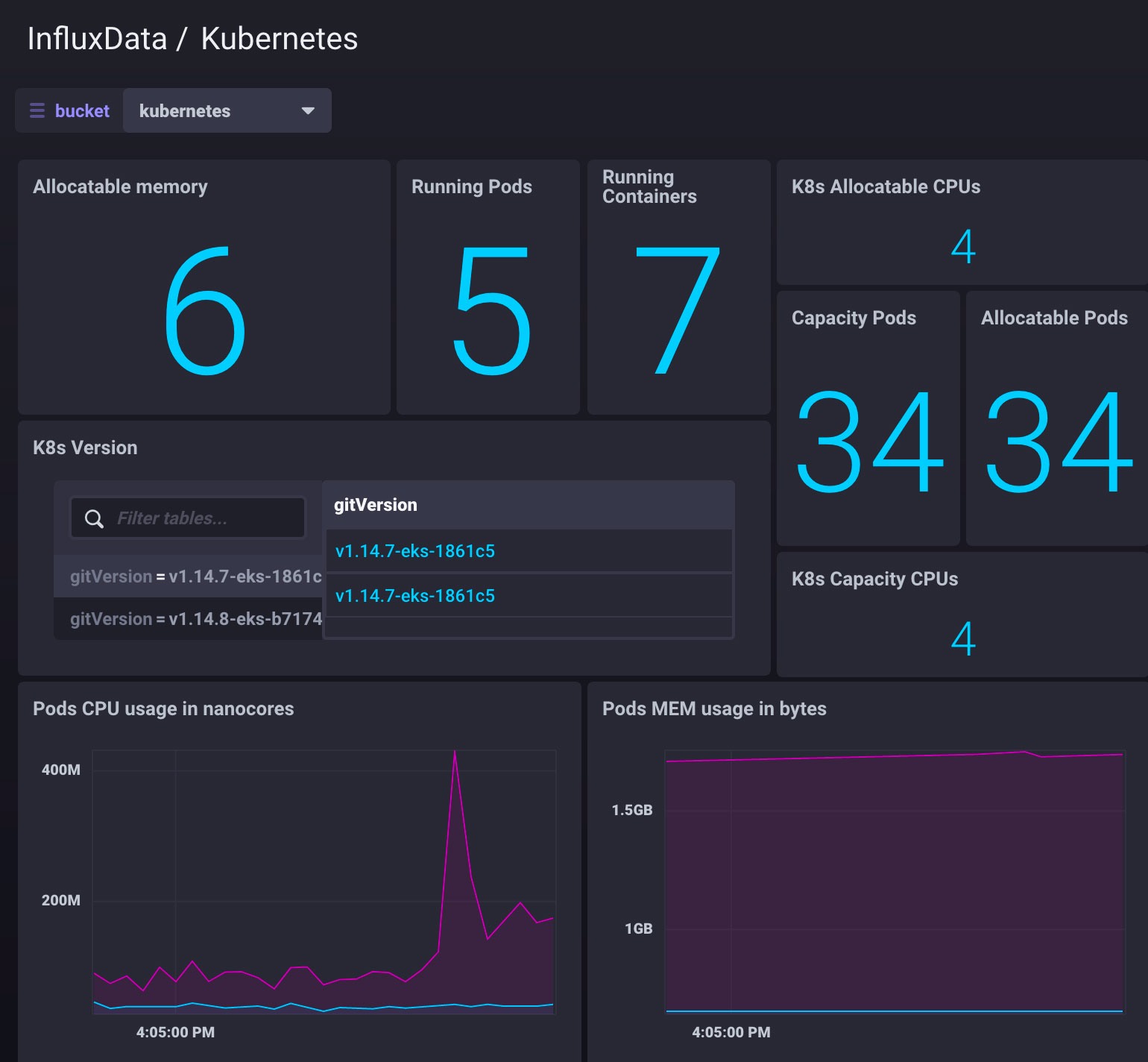 AWS Kinesis: Ingest data from AWS Kinesis for analysis, visualization, and alerting, using the Telegraf Kinesis consumer plugin. You can also use Telegraf to publish data to Kinesis as well.

AWS RDS: Enrich your time series data by joining it with your relational data in RDS, using Flux, our new data scripting language. This works with AWS RDS for MySQL, MariaDB, and Postgres. 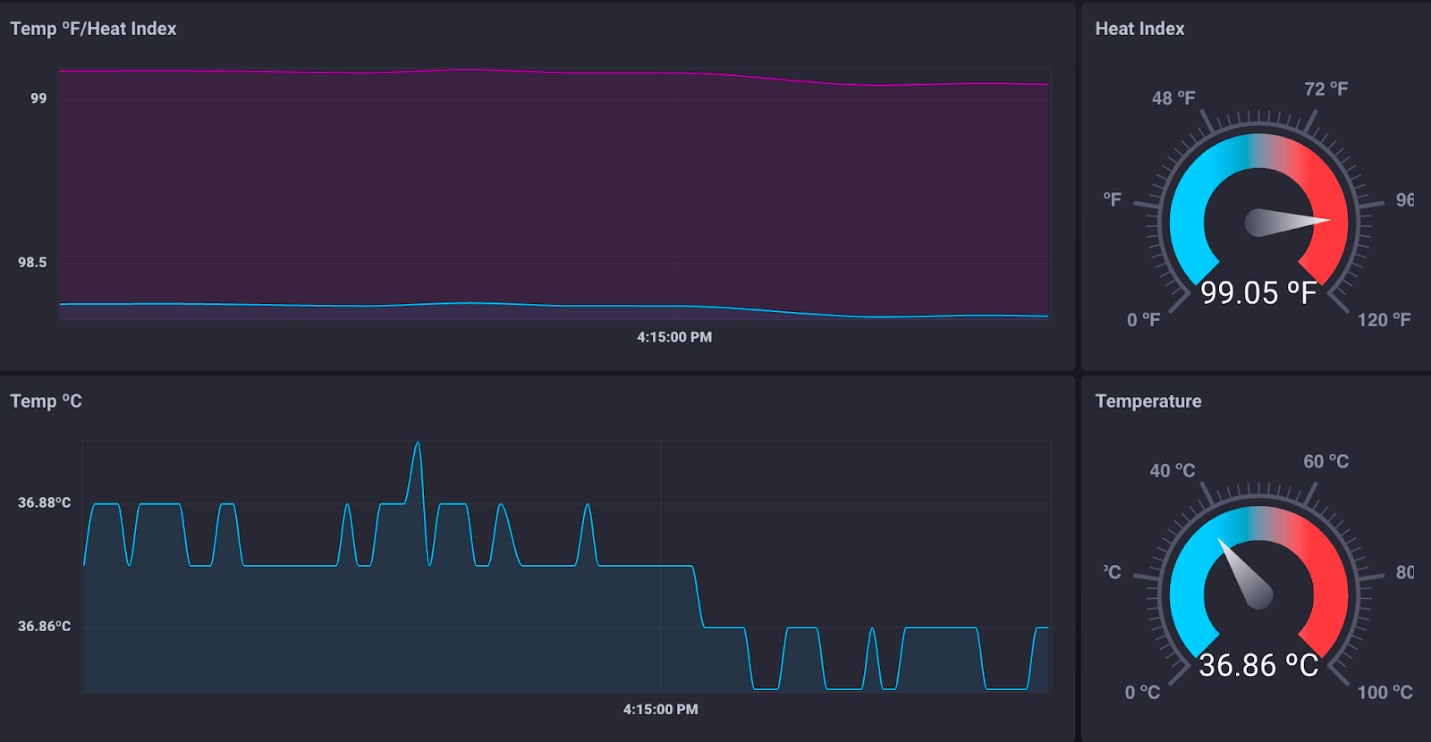 Why use InfluxDB with AWS

There are three main reasons to use InfluxDB on AWS: simplicity, completeness, and no lock-in.

Simplicity: Despite the “DB” at the end of its name, InfluxDB is actually a single time series platform  not just a database. Our platform doesn’t just store the data but also has pre-integrated functionality for data collection (Telegraf), analysis (Flux), visualization (Chronograf), and stream processing and alerting (Kapacitor). Other time series platforms make you connect all these parts, and that takes you away from doing work that actually matters.

Completeness: The InfluxDB platform has a rich set of functionality and integrations. Telegraf has 200 plugins so you can pull data in from just about anywhere (including 83 AWS services, as mentioned). You can send data to a wide range of destinations: alerts to PagerDuty, Slack, and many others, and time-series data to Grafana for visualization. There are client libraries for JavaScript, Python, and many more.

No lock-in: As an open-source platform with numerous third-party contributors, InfluxDB is engineered to avoid lock-in. We don’t charge you to export your data. You can run InfluxDB wherever you want: on multiple cloud vendors, on-prem, your laptop, even on IoT devices like a Raspberry Pi. You can enrich your time series data using joins against multiple cloud databases and on-prem SQL databases. 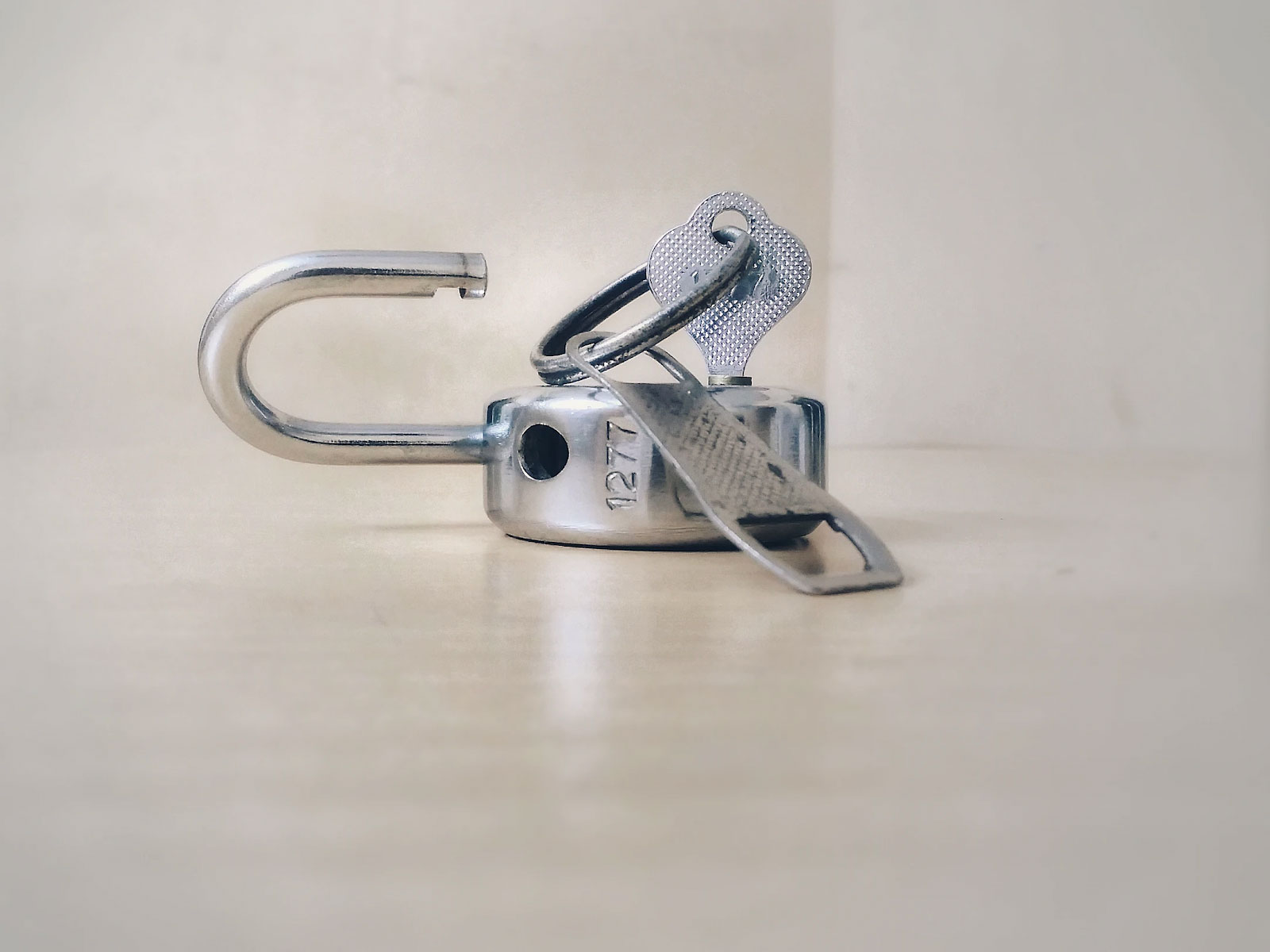 Who uses InfluxDB on AWS?

Lots of customers! But three stand out:

Capital One uses InfluxDB to monitor their AWS infrastructure, application and business process metrics, so they can deliver better service and uptime for their customers. They then apply machine learning to model predictions which are then brought back into InfluxDB for real-time access. You can read more in this case study.

MuleSoft, now part of Salesforce.com, uses InfluxDB Cloud for its AWS monitoring and diagnostic solutions that provide visibility to APIs and integrations, which in turn help customers identify and resolve issues quickly. More in this case study.

Houghton Mifflin Harcourt uses InfluxDB for real-time visibility into AWS spend for multiple business units and many developer teams, monitoring of AWS apps and infrastructure, and gathering and tracking KPIs to measure the company’s online educational business. More in this case study.

To Cloud or to Enterprise? That is the question...

How to choose between InfluxDB Cloud and InfluxDB Enterprise? Here’s a simple comparison:

To sum up, if you’d rather spend less effort maintaining your database, are flexible as to where it’s hosted, and don’t immediately need LDAP or Oauth support, InfluxDB Cloud is probably the best choice for you. Otherwise, take a look at InfluxDB Enterprise. 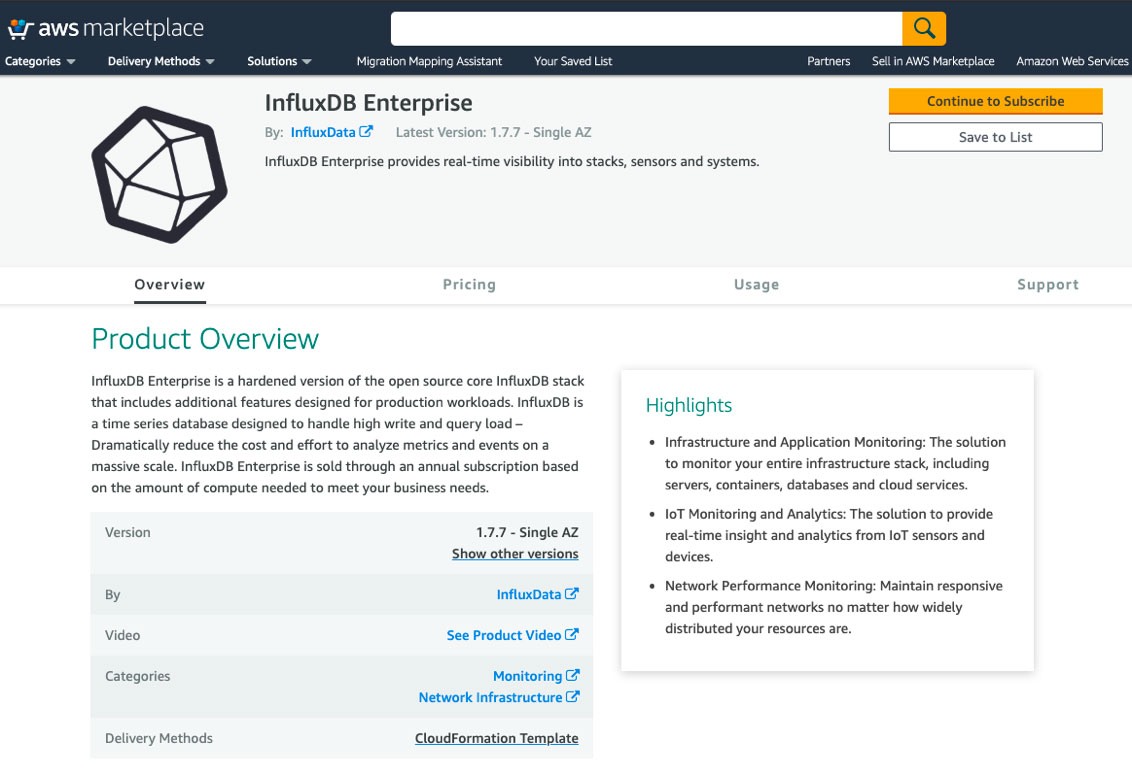 If you’re at AWS Reinvent, swing by booth #713 to chat about how we can help you manage your time series data on AWS. And if you’re not, try out InfluxDB Cloud or InfluxDB Enterprise.