So you’re using InfluxDB Cloud, and you’re writing millions of metrics to your account. You’re also running a variety of downsampling and data transformation tasks. Whether you’re building an IoT application on top of InfluxDB or monitoring your production environment with InfluxDB, your time series operations are finally running smoothly. You want to keep it that way. You might be a Free Plan Cloud user or a Usage-Based Plan user, but either way, you need visibility into your instance size to manage resources and costs. Use the InfluxDB Operational Monitoring Template to protect against runaway series cardinality and ensure that your tasks are successful.

What is the Operational Monitoring Template?

In case you’re new to InfluxData, InfluxDB Templates are a preconfigured and shareable collection of dashboards, tasks, alerts, Telegraf configurations, and more. You apply them by copying the URL of a template of interest from the community templates and pasting it into the UI. Today, we’ll apply the Operational Monitoring Template to our InfluxDB Cloud account to monitor our cardinality and task execution.

<figcaption> An example of how to apply a template through the UI. Navigate to the Templates tab on the Settings page and paste the link to the YAML or JSON of the template you want to apply.</figcaption>

The Operational Monitoring Template consists of the following resources:

How does the Task Summary dashboard help me? 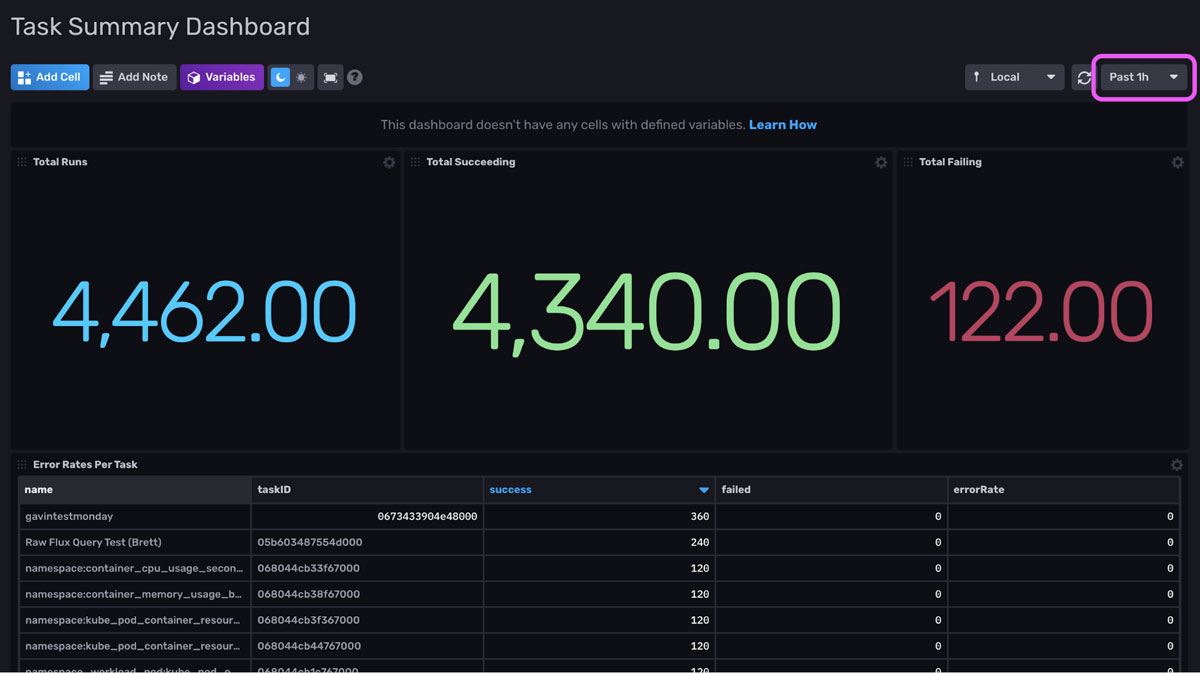 <figcaption> An example of the Task Summary Dashboard. It provides information about the success of task runs for the past hour controlled by the time range dropdown configuration (pink square).</figcaption>

The first three cells of this dashboard allow you to easily evaluate the success of all of your tasks for the specified time range. From this screenshot we see that we have 80 failed task runs. The cell in the second row, allows us to easily sort by the most successful and failed runs per task within the time range. It provides us with the error rate and task ID.

<figcaption> More of the Task Summary Dashboard. It provides information about the success of task runs for the past hour.</figcaption>

The dashboard also includes an Error List cell. This cell contains information about all of the failed runs, complete with the individual errorMessages for each runID. You can use this cell to determine why a task is failing. Below the Error Rates Over Time allows you to easily determine whether you have an increasing number of failed tasks. A linear line indicates that the same set of tasks are failing whereas an exponential line would suggest that an increasing number of tasks are failing.

<figcaption> More of the Task Summary Dashboard. It provides information about the success of task runs for the past hour.</figcaption>

Supplement the Template with your own Task Alerts

If you are running Tasks that are mission-critical to your time series use case, I recommend setting up Alerts to monitor when those Tasks are failing. Use the Task Summary Dashboard to help you find the taskID associated with the task you want to alert on. Now we need to convert our status into a numeric value in order to create a threshold alert for failed tasks. Next, navigate to the Data Explorer. Use the map() function to convert the status into a boolean with the following Flux script:

Click the Save As button, to convert this to an Alert. Then create a threshold alert and alert if the value of status_bool is below 1.

For more information on creating alerts, please refer to the section below, “Supplement the Template with your own Cardinality Alerts”, or Using Tasks and Checks for Monitoring with InfluxDB.

How does the Cardinality Explorer Dashboard help me?

The Cardinality Explorer Dashboard provides the cardinality per bucket in your InfluxDB instance.

<figcaption> An example of the Cardinality Explorer Dashboard. It provides information about the cardinality of your InfluxDB instance. Labels allow you to visualize metrics with a dropdown configuration (orange).</figcaption>

The variables at the top of the dashboard allow you to easily switch between buckets and measurements.

In the next section, we’ll learn about how the cardinality_by_bucket task works to help us understand how these cells produce this cardinality data as the queries follow the same logic as the task.

How does the cardinality task work?

The cardinality task, cardinality_by_bucket, consists of the following Flux code:

The Flux influxdata/influxdb package currently contains one Flux function, influxdb.cardinality(). This function returns the series cardinality of data within a specific bucket. The buckets() function returns a list of buckets. The map() function here is effectively “iterating” through the list of bucket names. It uses findRecord() in a custom function, cardinality, to return the series cardinality of each bucket. The return statement creates a new table with the corresponding  r.name for the field key, and cardinality._value for the field value. This data is then written to our “cardinality” bucket.

If you want to learn about the findRecord() function in more detail, refer to How to Extract Values, Visualize Scalars, and Perform Custom Aggregations with Flux and InfluxDB.

Supplement the Template with your own Cardinality Alerts

To gain the full benefits from this template, I recommend setting up a cardinality threshold alert based off of the cardinality bucket. The fastest way to create an alert is through the UI. Navigate to the Alerts tab in the UI. First query for your cardinality. Although it’s hard to visualize our cardinality data in the graph visualization, the default visualization type for the Alerts UI, I can hover over the points or view the data in the Raw Data View to understand my data better. 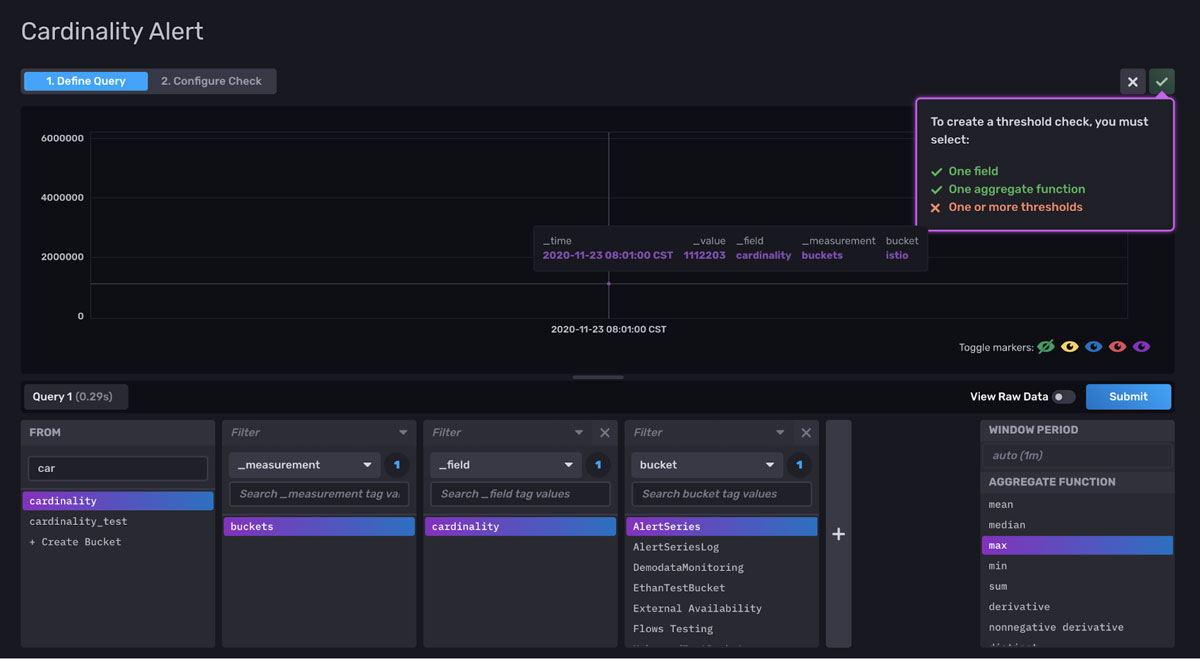 I notice that my cardinality data can be split into roughly three ranges. Next, I will configure alerts around those ranges. If the cardinality in my buckets crosses one of those three thresholds, I will receive an Alert.

If you want to learn about creating Alerts with the UI, refer to Using Tasks and Checks for Monitoring with InfluxDB and How to Monitor States with InfluxDB.

As an aside, if you’re interested in learning about why cardinality won’t be a point of concern for future InfluxDB users, I encourage you to read Announcing InfluxDB IOx – The Future Core of InfluxDB Built with Rust and Arrow.

I hope this InfluxDB Tech Tips post provides you with the tools to efficiently monitor your InfluxDB Cloud instance, successful time series operations, and the power to control your cost.  If you are planning to use the Operational Metrics Template, please ask us for help and share your story! Share your thoughts, concerns, or questions in the comments section, on our community site, or in our Slack channel. We’d love to get your feedback and help you with any problems you run into! Special thanks to @nathanielc and @aanthony1243 for contributing the two dashboards in this template.