Getting Started with Apache Kafka and InfluxDB

This article was written by Aykut Bulgu. Scroll down to view his bio and picture.

The number of applications and services increases every day as more application architectures move towards microservices or serverless structures. You can process this increasing amount of time series data with real-time aggregation or with a calculation whose output is a measurement or a metric. These metrics need to be monitored so that you can solve issues and make relevant changes in your system quickly.

A change in a system can be captured and observed in many ways. The most popular one, especially in a cloud-native environment, is to use events.

Event-driven systems became the standard for creating loosely coupled distributed systems. You can gather your application metrics, measurements, or logs in an event-driven way, such as event sourcing, change data capture (CDC), etc. and send them to a messaging backbone to be consumed by another resource, like a database or an observability tool. In this case, durability and performance are important, and traditional message brokers don’t typically offer these features.

Apache Kafka, on the contrary, is a durable, high-performance messaging system, which is also considered a distributed stream processing platform. Apache Kafka can be applied to many use cases, including messaging, data integration, log aggregation, and metrics.

When it comes to metrics, having a message backbone or a broker isn’t enough. While Apache Kafka is durable, it’s not designed to run queries for metrics and monitoring. This is where InfluxDB comes in.

InfluxDB is a time series database (TSDB) that provides storage and time series data retrieval for monitoring, application metrics, Internet of Things (IoT) sensor data, and real-time analytics. It can be integrated with Apache Kafka to send or receive metrics or event data for both processing and monitoring.

In this tutorial, you will learn about Apache Kafka and InfluxDB. You will also see how they can be used together to create tasks and alerts as well as query data via clients.

To complete this tutorial, you’ll need the following:

To follow along, you can use this GitHub repository.

In this article, you’ll be looking at a fictional IoT software company called InfluxGarden that provides services to gardening companies. Recently, they required a software development expert to integrate Apache Kafka with their InfluxDB system, which they plan to serve as a software-as-a-service (SaaS) platform.

InfluxGarden has sensors that measure things like humidity, temperature, soil, and wind. In this article, you’ll gather the data from a simulation application and then send the data to Apache Kafka to be read by InfluxDB and shown on its data explorer interface.

What is Apache Kafka?

As stated previously, Apache Kafka is an open source distributed stream processing platform that was created as a high-performance messaging system and has been used by more than 80 percent of all Fortune 100 companies.

Apache Kafka is known for its high throughput and low latency. It can be used in many ways, including the following:

When installed, Apache Kafka forms a cluster that consists of brokers and Zookeeper instances. Zookeeper is a third-party open source platform that was developed separately from the Apache Kafka project. It’s a dependency that Apache Kafka uses for tasks like selecting a controller broker.

The Kafka community has been working on getting rid of this dependency and has a Zookeeper-less mode in its most recent versions (which, currently, are not production-ready).

For more information about this, please refer to the Apache Kafka Improvement Proposal (KIP-500).

A broker usually refers to an Apache Kafka server instance that is a part of the Kafka cluster. For horizontal scalability and availability, brokers must run on different machines, and one of the brokers becomes the controller. For more information about the structure of Apache Kafka, please refer to the official Apache Kafka documentation.

Apache Kafka has topics, which are the logical storage units, like the tables of a relational database. Topics are distributed through the brokers via partitions, providing scalability and resilience.

When a client sends data to an Apache Kafka cluster instance, it must send it toward a topic.

When you consume a message from an Apache Kafka topic, the message isn’t deleted. You can re-consume any message as long as it is stored in the brokers, depending on the retention configuration. This is the replay mechanism of Apache Kafka and is very important for many use cases, including event-driven architectures.

A TSDB is a database that is optimized for time series data, which are metrics or events that are tracked, monitored, and aggregated over a period of time. These metrics and events are kept in a TSDB with a time stamp.

InfluxDB was created specifically for time series data in monitoring, application metrics, IoT, sensor data, and real-time analytics. It can be integrated with third-party data stores, like MongoDB, Elasticsearch, APIs, services, and message queues, in order to send and receive metrics data.

InfluxDB provides a plug-in-driven server agent called Telegraf that collects and reports metrics from any supported sources and feeds InfluxDB with that data or vice versa:

Telegraf can be started as a sysvinit or systemd service on Linux, or you can run it as a terminal command.

Telegraf has input and output plug-ins that must be configured upfront before starting it. For example, it has an Apache Kafka consumer input plug-in that makes it possible to read messages from a Kafka topic and an output plug-in that helps write any input data to InfluxDB. Here, you’ll use these plug-ins for Telegraf.

In this tutorial, you’ll run Apache Kafka in a container. To begin, download the Docker compose YAML file that has configurations for both Apache Kafka and its dependency, Zookeeper. The compose file uses container images that are based on Strimzi.

In your home directory, create a folder called influxgarden_integration and place the file in it with the name docker-compose.yaml.

Then open a terminal window and run the following command to execute Apache Kafka on your machine:

The output should be as follows:

Now you need to open a new terminal window and run the following command to verify that the Apache Kafka and Zookeeper instances are running:

The preceding output shows that the Apache Kafka cluster works without any problem.

In this tutorial, you will also run InfluxDB in a container via Docker.

For more information on installing InfluxDB on other platforms, refer to this documentation.

Once you have Docker installed and started on the Docker daemon in your macOS environment, you need to open a new terminal window and run the following command to start InfluxDB:

In your web browser, navigate to the localhost:8086 to verify the installation: 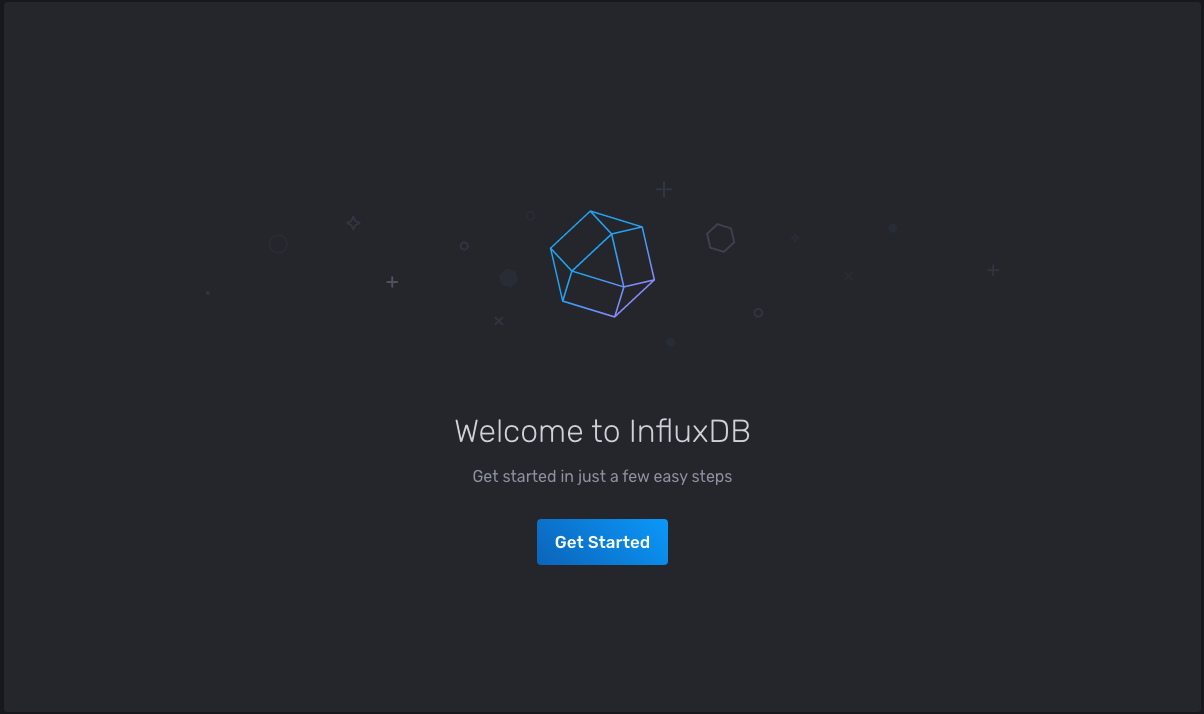 Select the Get Started button and enter the information as prompted: 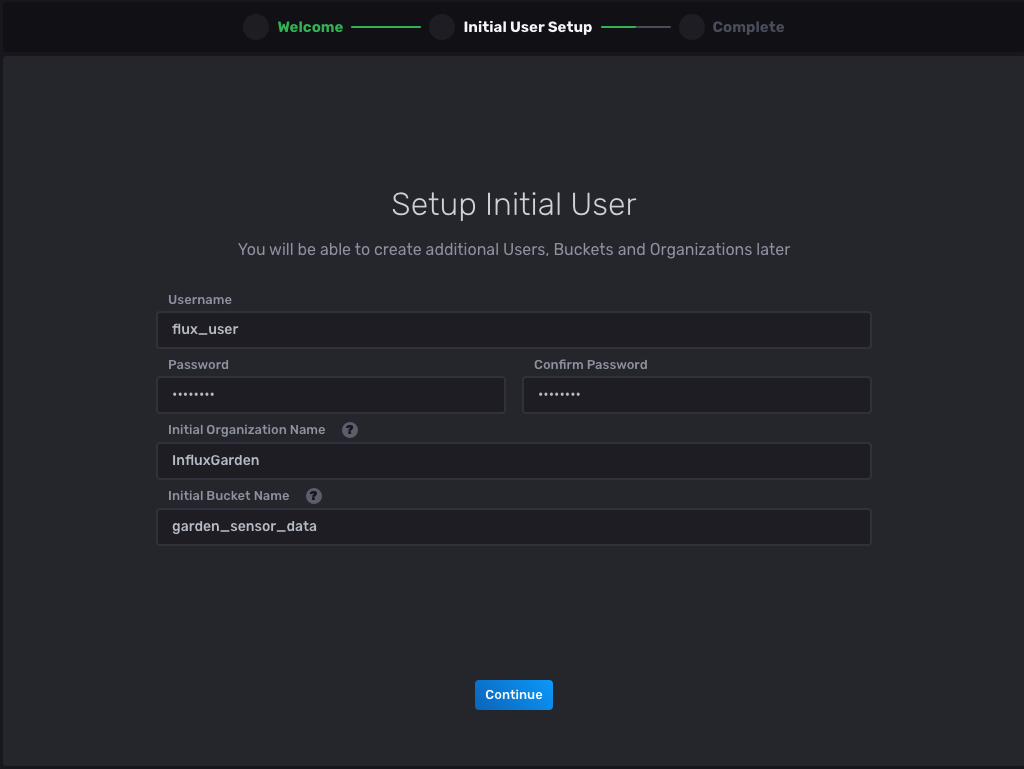 Now select Continue, and you should be redirected to the next page to complete the setup: 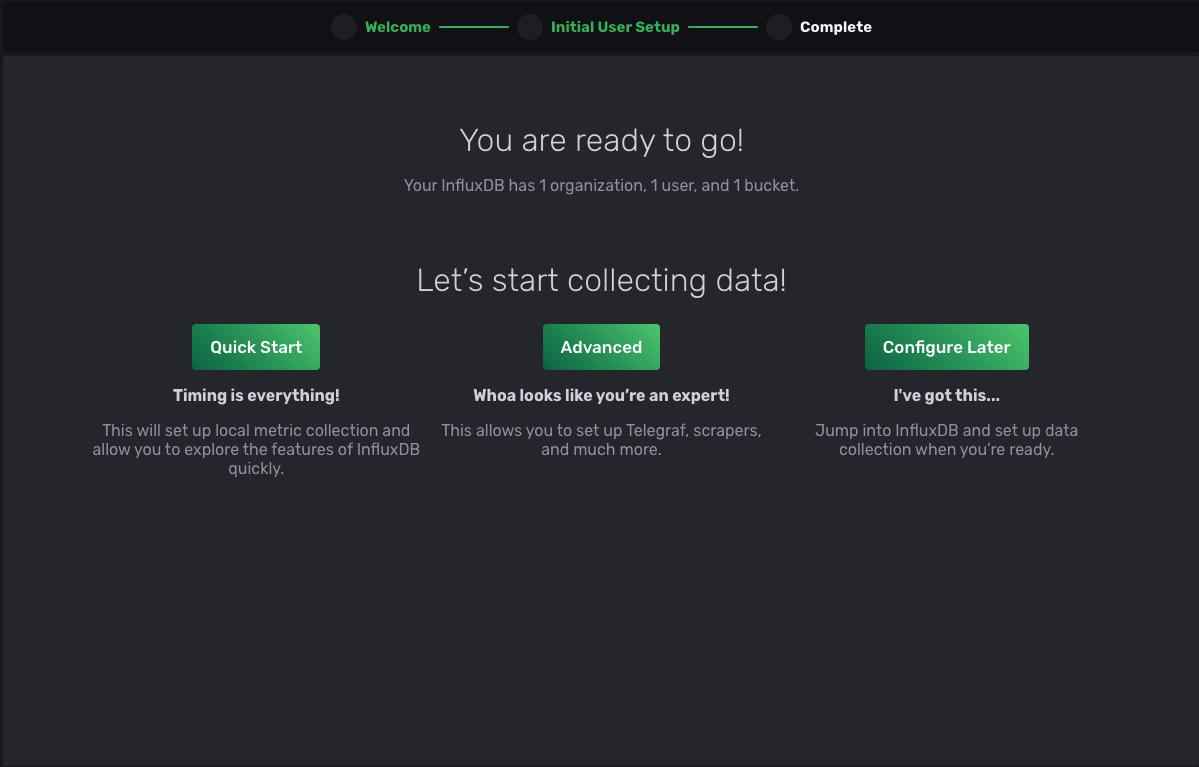 Once completed, select Advanced, and you’ll be redirected to the Load Data page with the Buckets tab selected. Please note that the bucket garden_sensor_data is available in the list, and keep the page open as you’ll need it later on in this tutorial.

To install Telegraf on macOS, open a new terminal window and run the following command:

As stated in the prerequisites, you’ll need Homebrew installed for this step. For other installation options on other platforms, you can refer to this documentation.

After installing Telegraf, you need to configure it in order to integrate InfluxDB and Apache Kafka.

Navigate back to the InfluxDB Load Data page you had previously navigated to and click Telegraf > InfluxDB Output Plugin: 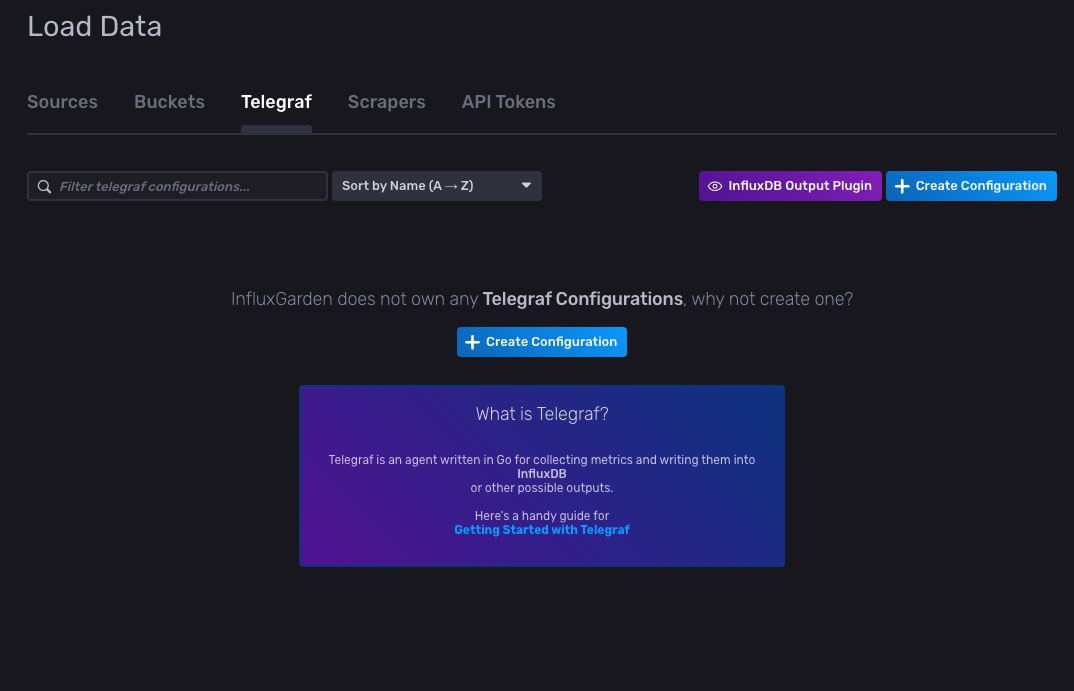 After selecting InfluxDB Output Plugin, a configuration pop-up should open, showing you the output configuration:

Notice that the organization and bucket names are already set in the configuration.

Create a file called telegraf.conf in the influxgarden_integration directory and copy the preceding configuration into it. By adding the outputs notation in the configuration file, you are integrating Telegraf with InfluxDB.

To get the data from a source and send it to the InfluxDB via Telegraf, you also need to add an input configuration in the same configuration file.

Notice that the brokers field is localhost:9092, which is your Apache Kafka broker address.

The topics field is garden_sensor_data, which means any message produced into this topic will be captured by Telegraf. You should also note that the data_format is set to json due to the fact that InfluxGarden requires a system that processes its JSON sensor data. For more information about the supported data formats, you can read the Telegraf GitHub page for “Input Data Formats”.

Now that you’ve configured Telegraf, it’s ready to be run. Before running the telegraf command, you must define the $INFLUX_TOKEN, which is in your output configuration.

You can get the token by navigating back to the Load Data page and selecting API Tokens. Click the flux_user’s Token link, which should open a pop-up window that shows you the token for the flux_user user you’ve created: 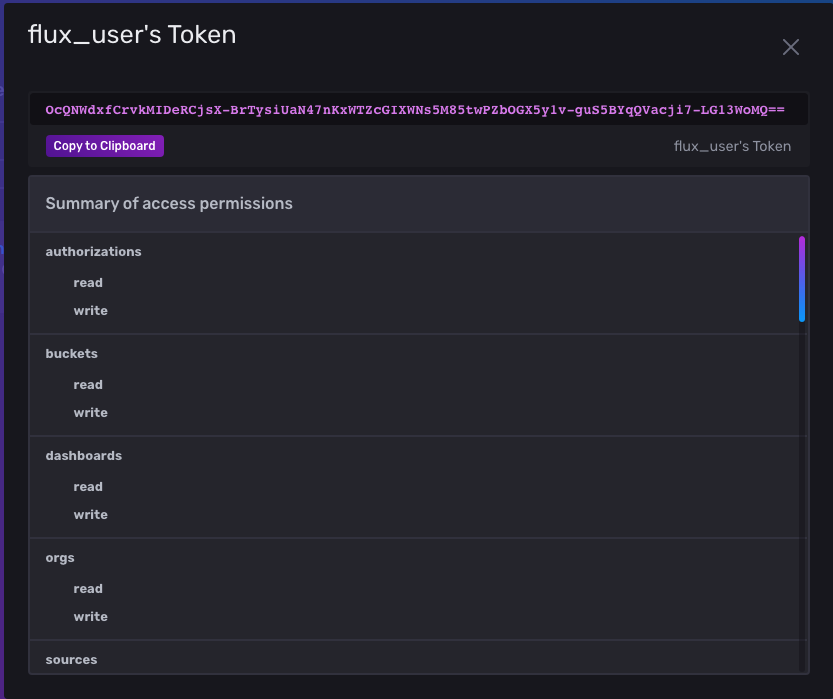 Copy the token and navigate back to your terminal window. For security reasons, don’t directly define it in the telegraf.conf file, but set it as an environment variable on your computer. Then run the following command by replacing _YOUR_INFLUXDB_TOKEN_ with your token:

In the same terminal window, run the following command to execute Telegraf. Make sure you set _YOUR_HOME_DIRECTORY_ correctly in this command:

The output should be as follows:

The InfluxGarden shares a Python application simulating a sensor that produces a variety of sensor data to the garden_sensor_data Kafka topic. This sensor data includes the information for humidity, temperature, soil, and wind, which are the sensor data types that InfluxGarden requires.

To download the producer application, copy the file content from this GitHub page and save it in the influxgarden_integration directory with the name garden_sensor_gateway.py.

Before running the sensor application, be sure that the Kafka cluster, InfluxDB, and the Telegraf instances are still running. Then run the following command to execute the application:

To see the data in action, navigate back to your InfluxDB web interface. From the menu on the left, click Explore, which will open the Data Explorer page: 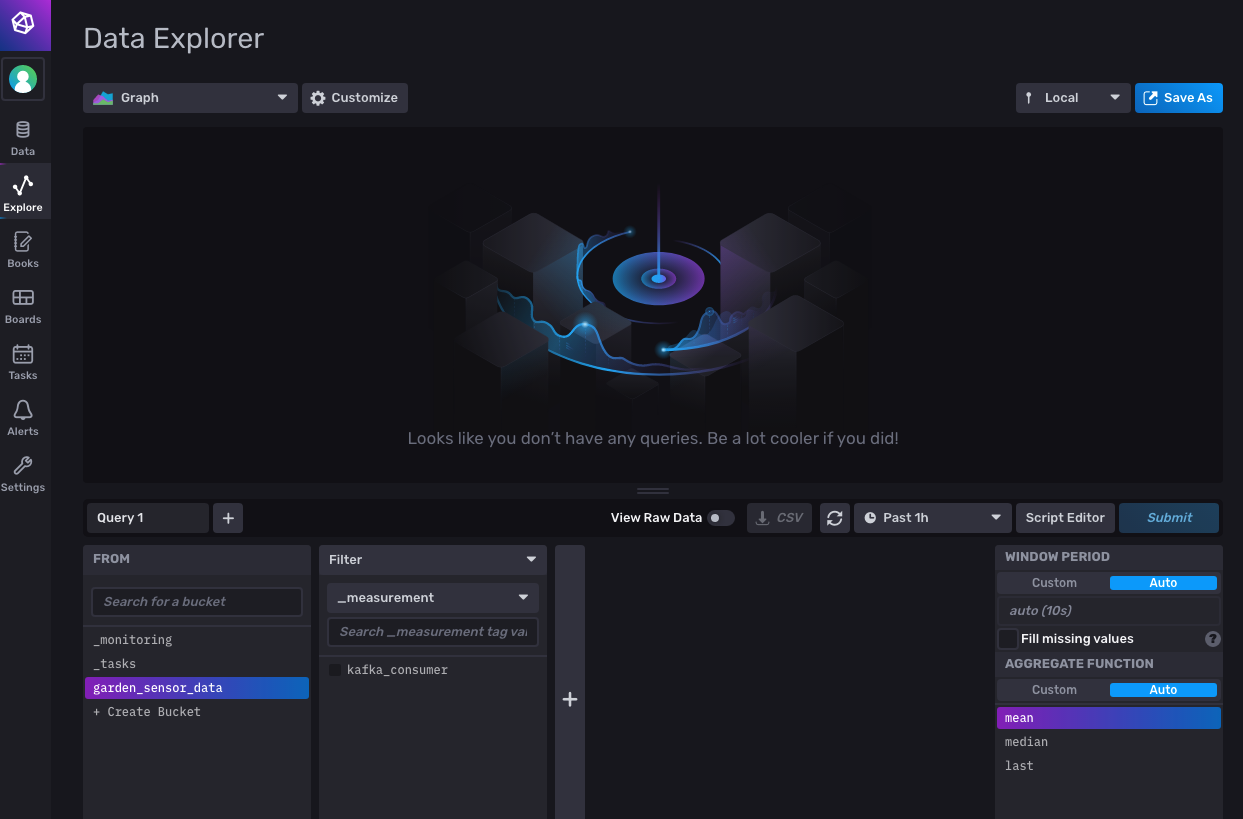 At the bottom of the page, you should see that the garden_sensor_data bucket is already selected. Click the kafka_consumer filter checkbox beside it; then click the Submit button on the right to run the query for all fields. This should open a graph that shows the changes in the sensor data:

To monitor a specific sensor data change, you can click one of the field checkboxes on the _field filter. Then select one of the sensor data fields (in this case, humidity) and click Submit to filter the results: 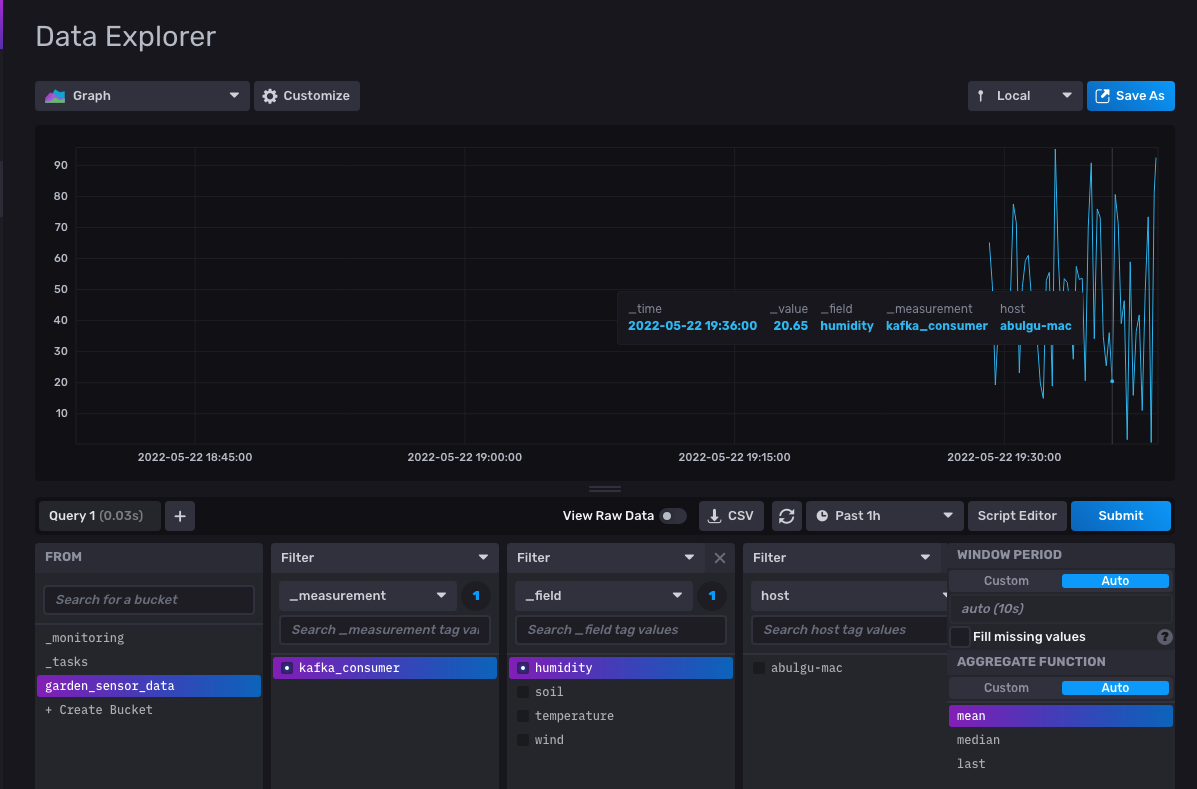 Instead of Graph, you can select other InfluxDB data visualization features from the drop-down: 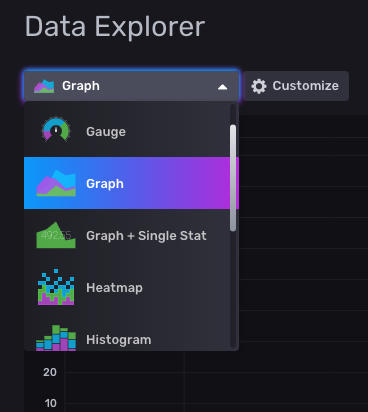 In this tutorial, you successfully streamed real-time sensor data from Apache Kafka to InfluxDB using Telegraf.

InfluxDB provides storage and time series data retrieval for monitoring, application metrics, IoT sensor data, and real-time analytics. It can be integrated with Apache Kafka easily using Telegraf to send or receive metrics or event data for both processing and monitoring.

You can find the resources for this tutorial in this GitHub repository.

Now that you are storing your time series data with InfluxDB, there are a number of other features you can take advantage of to get the most value out of your data. Check out these resources if you are interested in next steps you can take:

Aykut Bulgu, a services content architect at Red Hat, has worked as a software engineer, consultant, and trainer for fifteen years. He has worked on many enterprise projects—mainly Java—and used many open source projects including the JBoss middleware. Currently, he works with open source projects such as Apache Kafka, Camel, and Strimzi to create well-grounded courses. He enjoys disseminating the system craftsmanship culture and co-organizes events for the Software Craftsmanship Turkey community.