Real-time visibility into your entire container-based environment to unify all your metrics and events for faster root cause analysis. 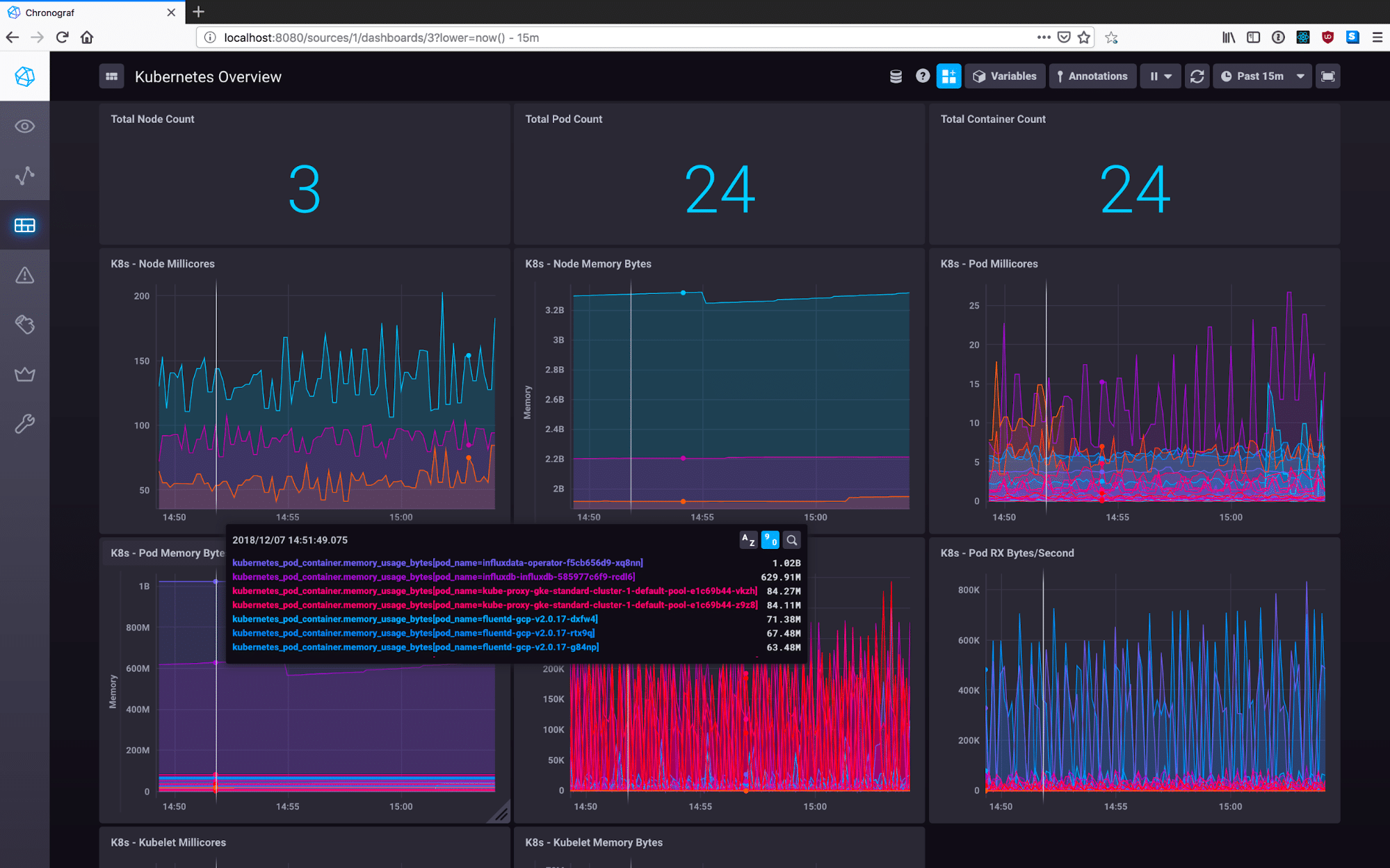 Kubernetes orchestration provides built-in fault tolerance, automating scaling and maintenance for a desired cluster state. However, visibility must come with the necessary granularity and information for fast identification of the source of trouble. Monitoring and accountability are what make automation reliable.

Why InfluxDB for Kubernetes monitoring?

Most production environments don’t have a singular approach when it comes to application monitoring. InfluxDB can monitor private and public cloud infrastructures (e.g., PaaS, SaaS, website) and provide deployment variances for scalability, as well as custom instrumentations for uniqueness and cross-measurement analytics advanced alerting. InfluxDB helps to identify and resolve problems before they affect critical processes, and most importantly, offers ways to implement Kubernetes monitoring that accommodates developers’ need for instrumentation without overloading IT operations.

Get broad insight and act in time

Monitor all Prometheus metrics, custom application metrics, K8s annotations, and logs from one pane. Multiple data collection options and comprehensive view of infrastructure, containers and applications status is fundamental to keep services running without degradations or escalating issues that could lead to outages.

Optimize to be competitive at lower cost

InfluxDB is a performant store for time series data both numeric and non-numeric. Avoiding the need for expensive hardware and storage, and also, to install and maintain multiple monitoring platforms. InfluxDB real-time stream analytics, highly efficient compression and compaction, allow data to be ingested and stored cost-effectively.

InfluxDB’s purpose-built design for time series allows for very high volume storage of monitoring records while providing horizontal scalability and high availability with clustering. This makes it an ideal solution for long-term storage of Kubernetes monitoring data for historic records or modeling purposes.

InfluxData’s Telegraf is an open source, plugin-based agent (200+ plugins) that collects metrics and events, from Kubernetes nodes, master node, pods, containers and all Prometheus /metric endpoints. Telegraf is also capable of monitoring itself and its metric pipeline, so you can be alerted if some important metrics are not being collected. In Kubernetes cluster environments, Telegraf can be deployed as a DaemonSet in every node, as an application sidecar in pods, or as a central collector.

In addition to Telegraf’s versatility in collecting data from Kubernetes APIs, Prometheus /metrics endpoint, infrastructure (systems, VMs and containers), and applications, InfluxData has implemented a Kubernetes Operator to facilitate the deployment and management of InfluxDB Instances.

Telegraf can be installed as a DaemonSet in every Kubernetes node. Telegraf can directly collect monitoring data from the nodes, containers, pods, and application via push or pull mechanism. This deployment option is good for baseline metrics that need to be collected from all nodes.

Telegraf deployed as a sidecar agent

Telegraf can be installed as an application sidecar in Kubernetes pod deployments. As a sidecar, Telegraf is encapsulated in the pod with the application sharing the same network. This deployment is particularly useful to isolate the impact of application instrumentation to the pod level, not overloading the entire Kubernetes monitoring. Sidecar deployment gives freedom to developers to expose and instrument metrics as they find necessary, without burdening IT Ops with scraping scaling issues.

InfluxDB Kubernetes Operator allows for InfluxDB to be deployed as a Kubernetes object. It is built using the Operator SDK, which is part of the Operator Framework, and manages one or more InfluxDB instances deployed on Kubernetes. A common use case is to facilitate backup/restore operations. 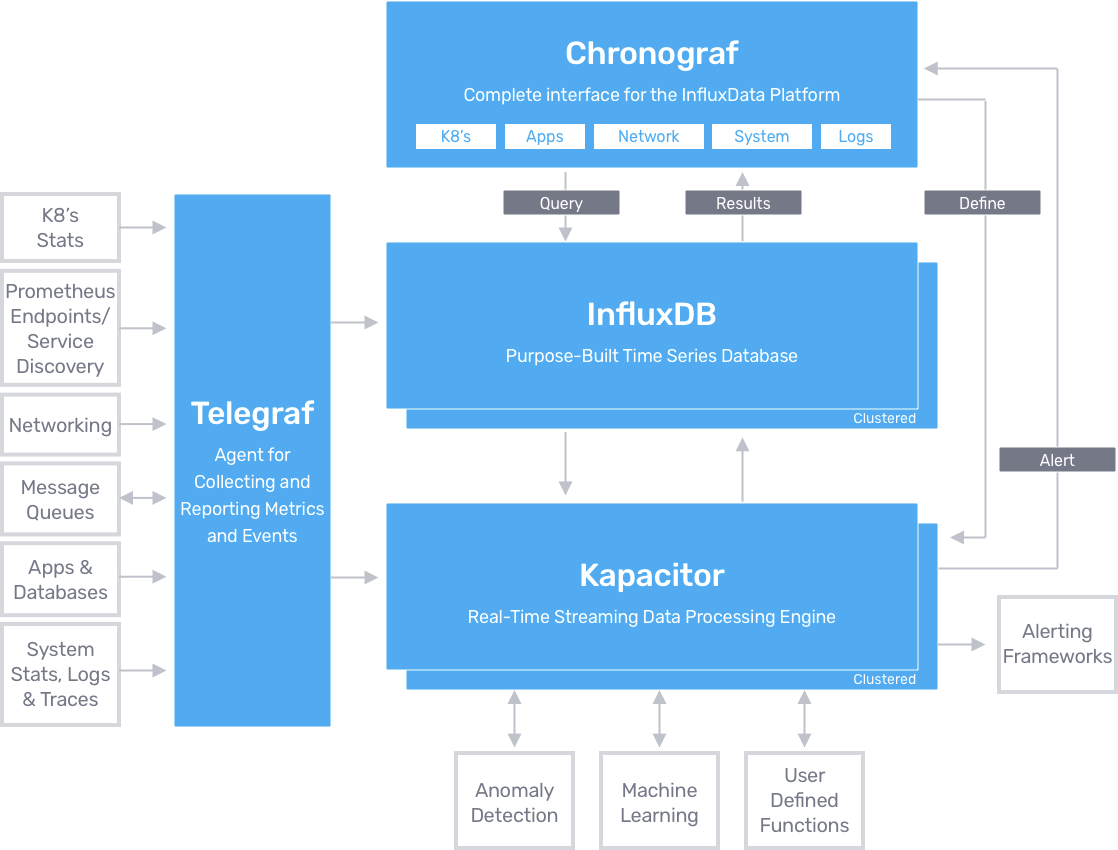 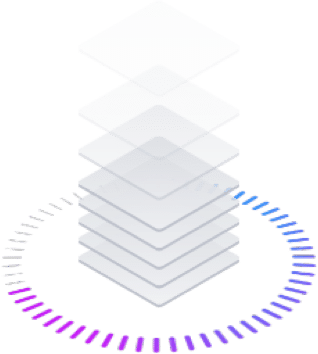 “It’s a unique product that provides features like clustering, commercial support, and data retention that matter a lot to us. That’s why we picked InfluxData and that’s why several years ago, we rolled out our first integration with InfluxDB for the Kubernetes clusters that we deploy.”

“It’s a unique product that provides features like clustering, commercial support, and data retention that matter a lot to us. That’s why we picked InfluxData and that’s why several years ago, we rolled out our first integration with InfluxDB for the Kubernetes clusters that we deploy.”

“Before InfluxDB, we were like a lot of organizations where we didn’t have the visibility into what was going on in our K8s and Docker environments. Now with InfluxDB we are able to get insights in real time and act on.”

“Before InfluxDB, we were like a lot of organizations where we didn’t have the visibility into what was going on in our K8s and Docker environments. Now with InfluxDB we are able to get insights in real time and act on.”

InfluxData has added Kubernetes-specific capabilities to make it easier for its users to work with Kubernetes: 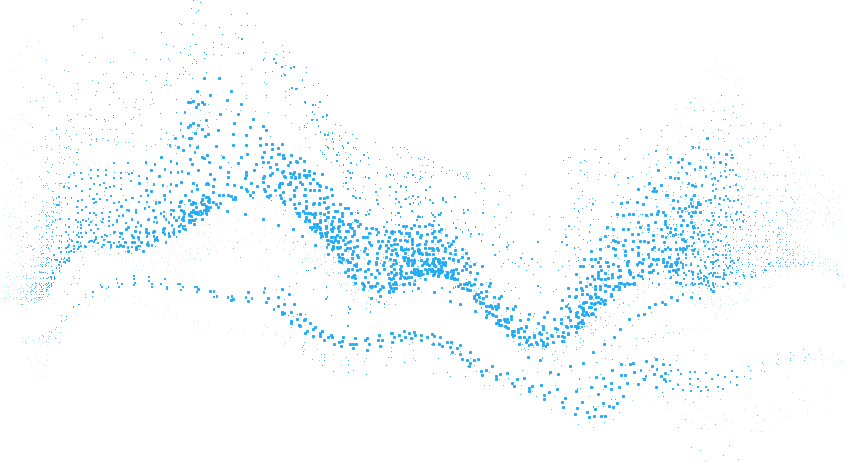 Lear more about application monitoring implementations made available by the InfluxDB community:

shows how to use InfluxData to help Kubernetes orchestrate the scaling out of applications by monitoring all components of the underlying infrastructure.

Draft for Kubernetes – A Prototyping Tool

Monitoring the Kubernetes Nginx Ingress with the Nginx InfluxDB Module

Kubernetes Cluster Monitoring and Autoscaling With Telegraf and Kapacitor

How to Spin up the TICK Stack in a Kubernetes Instance