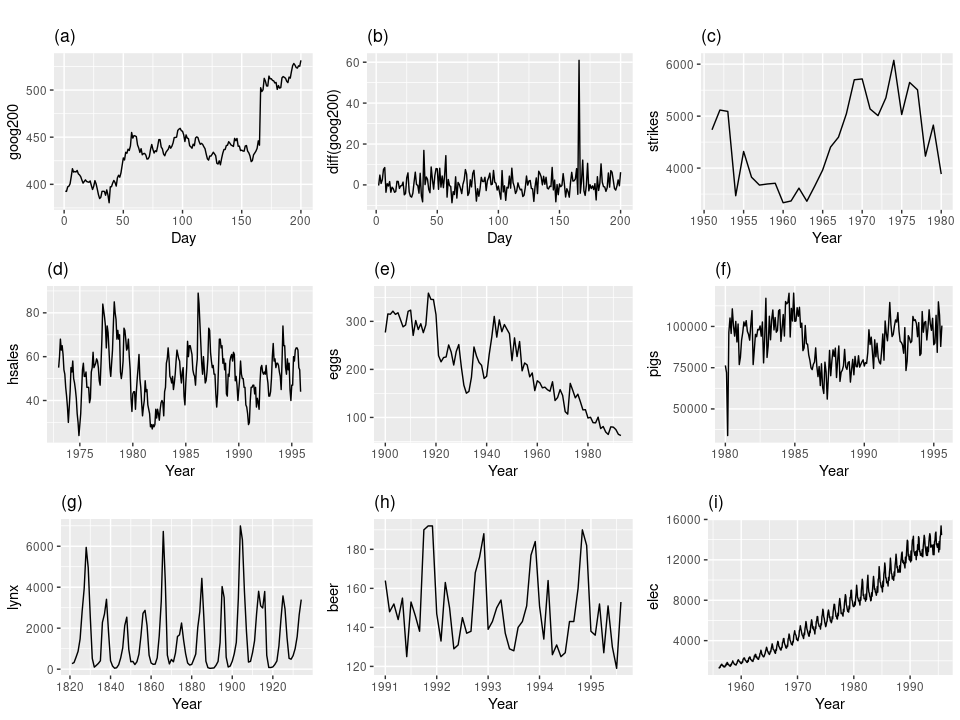 The following plots from Hyndman & Athanasopoulos, 2018 help to illustrate stationarity.

“Which of these series are stationary? (a) Google stock price for 200 consecutive days; (b) Daily change in the Google stock price for 200 consecutive days; (c) Annual number of strikes in the US; (d) Monthly sales of new one-family houses sold in the US; (e) Annual price of a dozen eggs in the US (constant dollars); (f) Monthly total of pigs slaughtered in Victoria, Australia; (g) Annual total of lynx trapped in the McKenzie River district of north-west Canada; (h) Monthly Australian beer production; (i) Monthly Australian electricity production.

Which of these do you think are stationary? Obvious seasonality rules out series (d), (h), and (i). Trends and changing levels rule out series (a), (c), (e), (f), and (i). Increasing variance also rules out (i). That leaves only (b) and (g) as stationary series.

At first glance, the strong cycles in series (g) might appear to make it non-stationary. But these cycles are aperiodic — they are caused when the lynx population becomes too large for the available feed, so that they stop breeding and the population falls to low numbers, then the regeneration of their food sources allows the population to grow again, and so on. In the long-term, the timing of these cycles is not predictable. Hence the series is stationary.”

Learn everything you need to know about time series data